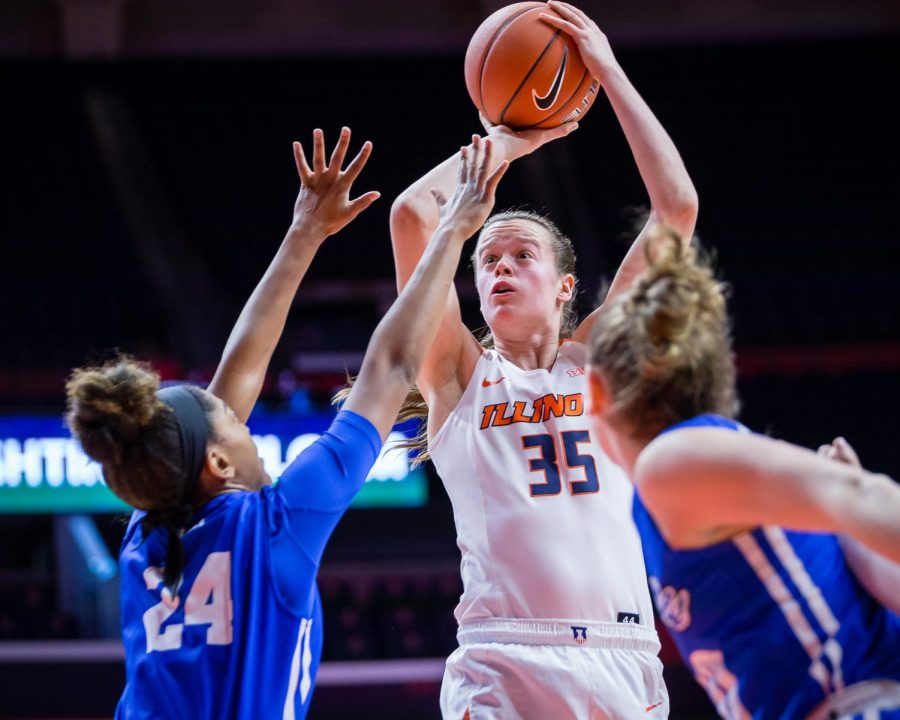 Illinois forward Alex Wittinger rises up to shoot the ball during the game against Indiana State at the State Farm Center on Dec. 5. The Illini won 75-57.

As she nears the halfway point of her final season as an Illini, senior Alex Wittinger has continued to be the driving force of the Illinois women’s basketball team, a role she assumed early on in her career.

Wittinger showed promise from the beginning of her career as a frequent starter and playing in all but two games as a freshman. Wittinger was a two-time 2016 Big Ten Freshman of the Week and was named to the Big Ten All-Freshman team.

The next two years brought more improvements and accomplishments for the forward, as she started in every game she appeared in and was the team’s leading scorer in both seasons. Wittinger was also a 2017 All-Big Ten Honorable Mention and made the 2018 All-Big Ten Second Team.

“Alex (Wittinger) has been a great player here for three years,” said head coach Nancy Fahey. “She’s just a great player. On and off the court, you can see it because she’s always played so hard.”

This season, Wittinger is leading Illinois with 17.1 points, 9.7 rebounds and 3.1 blocks per game, but this comes as no surprise. Wittinger has averaged in the double digits since her freshman year and has led Illinois in scoring, rebounds and blocks since her sophomore year.

Just nine games into her senior season, Wittinger has proven she’s in the midst of another record-breaking season. The Delano, Minnesota, native recorded a new career-high point of 32 points versus Sacramento State, topping her previous high of 30.

The senior also recorded her career-best shooting percentage from the field this season, shooting 85 percent in Illinois’ most recent game on Tuesday night against Murray State. Wittinger led Illinois during the contest with 22 points, the fourth time she has led Illinois in points this season.

While Wittinger has proven to be dominant on the offensive end, she has stayed focused on her defensive responsibilities. Before the first game this year, the senior discussed her personal goals, hoping this season would be “the best one yet.”

“I am chasing the block record; that’s something I really want to achieve personally,” Wittinger said. “I’m just going to continue to do what I’ve been doing and hopefully get it that way.”

Wittinger spent no time waiting, recording her 200th block of her career during Illinois’ first game of the season against Alabama A&M. Now at 227 blocks for her career, Wittinger is chasing the goal with the current block record set at 271.

It is clear Wittinger has learned how to be a leader on the court, as she does that by example. However, being a senior has also pushed Wittinger into an older sister role.

“(Wittinger) is one of our main leaders,” said freshman Arieal Scott. “For Alex, she’s not just a leader on the court, but she’s a leader off the court. She always checks in on me and everything else, so just having her presence here makes us all calm and OK and ready to go.”

While Scott was eager to learn from Wittinger, the senior was just as excited about seeing the freshman get time on the court this season. Now several games in, Wittinger has been happy to see her younger teammates contributing in games just as much as the veteran players.

“It’s really cool being on this end of my career and seeing the younger people grow because it reminds me of when I was a freshman and I had a lot to learn,” Wittinger said.