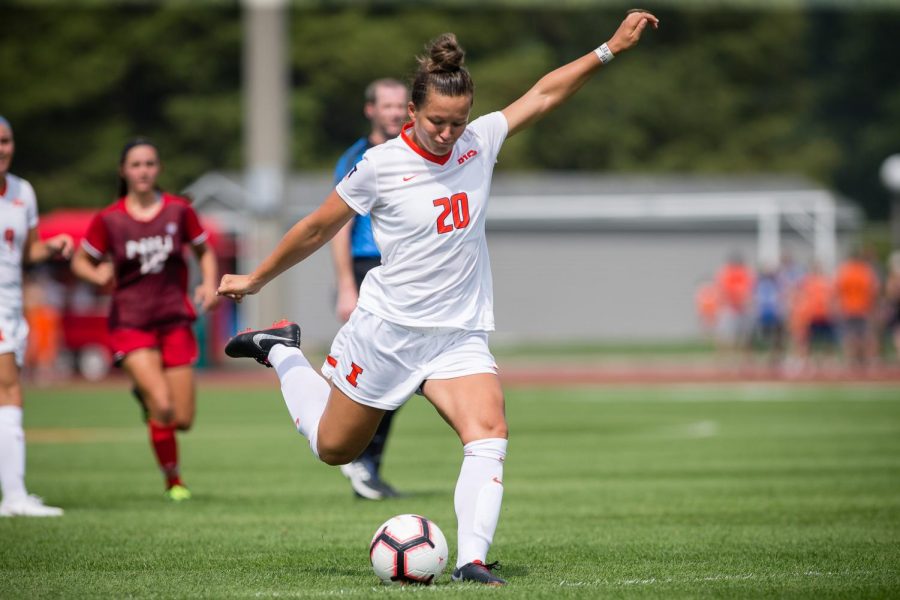 Illinois forward Makena Silber (20) shoots the ball during the game against Northern Illinois at the Illinois Soccer Stadium on Sunday, Aug. 26, 2018. The Illini won 8-0.

Oftentimes, a freshman college athlete goes from hometown-hero to a team member fighting to prove their worth.

Nevertheless, it doesn’t take long before these athletes are thrust into game after game competition against opponents who were also once perceived as the best.

It can be an experience full of ups and downs. While it is not easy for freshmen to adapt to their new program, upperclassmen and fellow freshman teammates help propel them to succeed early in their careers.

Forward Makena Silber, who scored the game-tying goal in Illinois’ upset win at No. 3 Duke on Aug. 19, feels that the team chemistry off the field has already influenced success on the field.

“Its been a whirlwind to be completely honest,” Silber said. “Coming in on an athletic team makes (it) easier to form those relationships, and I think it translates on to the field.”

While last season was a tough one for Illinois, head coach Janet Rayfield often preached about building a culture that would one day lead to winning ways.

Now, Rayfield feels her seniors have done a good job of incorporating the freshmen into the culture, setting an example of how they should handle their business on the field.

“From the day that they commit and tell us they want to be an Illini, we start incorporating them into the family. This senior class has done a really good job, not just of making them feel welcome, but of letting them know what the standards and expectations are,” Rayfield said. “They stepped into something where the bar is high, and they’re expected to try and meet that every day. Even the days that they don’t, they’re expected to turn around the next day and meet that standard, and the senior class has done a good job of showing them that example.”

Silber was also thankful for the help from her fellow upperclassman, acknowledging the specific teammates who have helped her early production the most.

For fellow freshman forward Peyton Willie, failure early on pushed her even harder to improve.

While her body was not quite ready for the college game when she arrived, Willie’s effort to be in the best physical condition possible helped her attitude improve as well.

“When I first came into it, we had our preseason fitness tests; it was difficult; I didn’t pass either of them on my first try,” Willie said. “That only motivated me to pass them on my second, and ever since it’s been going up.”

Willie tallied her first goal for Illinois in Sunday’s 8-0 victory over Northern Illinois and feels that Illinois is far more threatening on the attacking end this season, which is a clear change of pace compared to last season.

According to Willie, the fact that the Illini were able to defeat a top-five team nationally speaks a lot about their improvement on offense.

“It means a lot considering the season we had last year,” Willie said. “As far as goal scoring last year, it wasn’t a very high number. So it’s nice to get goals early, and beating the number three team in the nation is pretty big.”

Last fall, the Illini scored just 13 goals in 19 total games.  They have drastically improved in that area already this season, putting the ball in the back of the net 12 times in just four games thus far.

But the freshmen aren’t  only spending a lot time training and in games; they are also building personal relationships.

Defender Ashley Cathro, who tallied an assist against Northern Illinois, feels the group’s closeness away from the pitch has played a role in their quick adaption to playing together for the first time.

“Being all roommates, we spend a lot of hours and time together. And within the same classes we’ve gotten to know each other on more of a personal level, and I think that’s really translated to our play on the field,” Cathro said.

The freshmen have already claimed a favorite hobby.

“If we have free time we like to go get frozen yogurt and chill a bit,” Cathro said.

Rayfield knows her freshman will have their good and bad days, but she expects them to always handle themselves as if they are upperclassmen.

“The challenging thing for a freshman is to know when it’s time to compete and not worry about things you don’t know. And when to say ‘I’m a freshman, and someone needs to teach me these things,’” Rayfield said.

“This freshman class has done a good job of that. When they step on the soccer field, they’re just soccer players They don’t, and shouldn’t, act like freshmen. That’s why you see them contributing to our success this early on.”