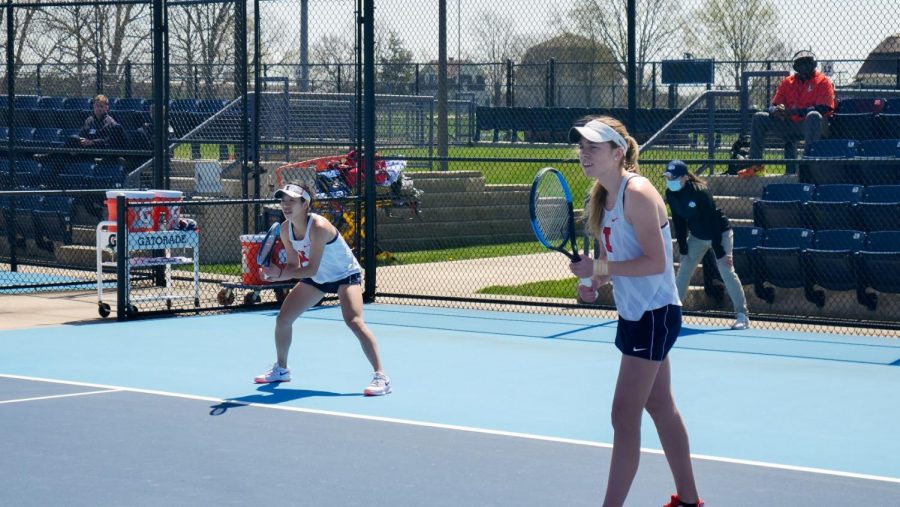 Senior Asuka Kawai and sophomore Josie Frazier get ready to start the match against Michigan on Friday. The Women’s Tennis Team continues to keep their momentum up and won against Purdue on Sunday.

The Illinois women’s tennis team were back in action this weekend, facing off against the Michigan State Spartans and the Purdue Boilermakers.

The Illini began their weekend during the afternoon on Friday, as the Spartans visited the Atkins Tennis Center. These matches were the first of the season that were played outside. Even though it was nice for the team to finally play matches outside, freshman Kate Duong and the rest of her teammates understood the challenges that come with the new surroundings.

“It was particularly windy on Friday,” Duong said. “The wind was almost 20 miles an hour, which is a lot. So that is one aspect that everyone on the team had to deal with.”

Michigan State came into Urbana with a 4-10 record, currently on a four-game skid in the Big Ten. The last time the two teams met was in East Lansing on March 7, where Illinois was victorious 4-2.

The Spartans won two out of the three doubles matches, and the two teams split the singles matches, resulting in a 4-3 win for Michigan State.

Although the Illini lost in a disappointing fashion, there were bright spots from Friday’s matches. One of these was Kate Duong, who won her singles match 6-1, 6-1 against Michigan State’s Samantha Memije.

When the team traveled to West Lafayette on Sunday to face off against the Purdue Boilermakers, Kate Duong recognized a change in mindset on Sunday after the tough loss.

“Today, the team atmosphere was just amazing,” Duong said. “We all were pretty hurt about losing to Michigan State on Friday given we beat them 4-2 last time, so we came into today’s match feeling really determined.”

Purdue began play on Sunday with a 5-9 record, toward the bottom of the Big Ten standings. The Illini got right down to business against the Boilermakers, winning the doubles points on courts two and three behind strong performances from Josie Frazier and Asuka Kawai, along with Ashley Yeah and Kate Duong.

Illinois followed up their strong doubles performances with three out of four wins during the singles competition, which sealed a 4-1 victory on the day. Kate Duong, Frazier and Emily Casati all won their respective singles matches.

After this weekend the Illini sit at 7-8 ahead of their last match of the regular season next Sunday against the 17-3 Northwestern Wildcats. Illinois’ match against Northwestern will begin at noon central time on Sunday at the Atkins Tennis Center.