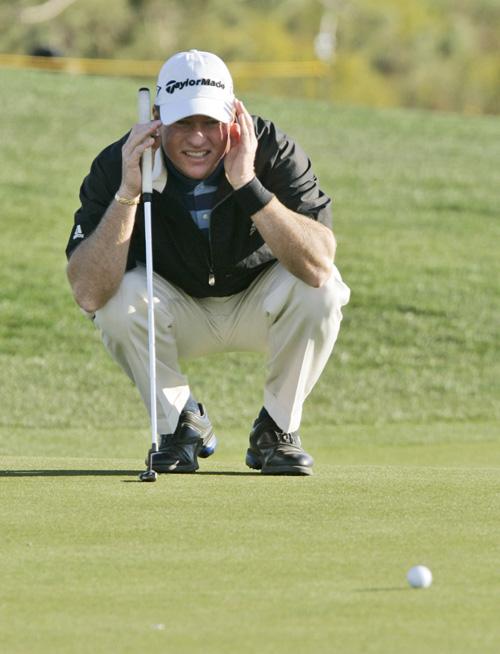 Scott Verplank, from Edmond, Okla., lines up a put on his 15th hole during the second round of the Bob Hope Classic golf tournament at the Classic Club golf course in Thousand Palms, Calif., Thursday, Jan. 18, 2007. Verplank finished the second day with (AP Photo/Don Ryan)

THOUSAND PALMS, Calif. – Scott Verplank spoiled a bogey-free round with a shot that found water on the final hole Thursday, but his 6-under 66 still was good enough for a share of the 2007 Bob Hope Chrysler Classic lead.

Justin Rose holed a pair of bunker shots on the way to a 65 that also put him at 12 under and tied at the top through two rounds of the five-day tournament.

Verplank, who finished in a second-place tie in the Hope last year, began the second day tied for fourth, three strokes behind leader Robert Allenby.

Starting on the back nine at the Classic Club, one of four courses used for the first four rounds, Verplank teed up on his last hole of the day one shot ahead of Rose, who already finished.

Verplank’s second shot on the 595-yard, par-5 ninth hit the bank near the green and rolled into the water. After a drop, he had a 30-foot putt for par, but left it 5 feet short.

Rose, who tied for 10th in the 2006 tournament, knocked in his bunker shot for an eagle on the par-5, 516-yard fifth at La Quinta Country Club. He duplicated that feat with another out of the sand for a birdie on the par-3, 202-yard 12th.

Allenby followed his opening 63 with a 70 and was tied for third with Johnson Wagner at 11 under. Wagner had a 67.

Phil Mickelson, in his first event of the year, shot his second consecutive 70, leaving him eight shots behind the leaders. He won the tournament in 2002 and 2004.

Defending champion Chad Campbell stumbled to a 74 at La Quinta that dropped him 12 strokes back at even par.

The 42-year-old Verplank tied for second last year. Verplank went into the final round one shot behind Campbell, but shot a 73 to finish three strokes behind.