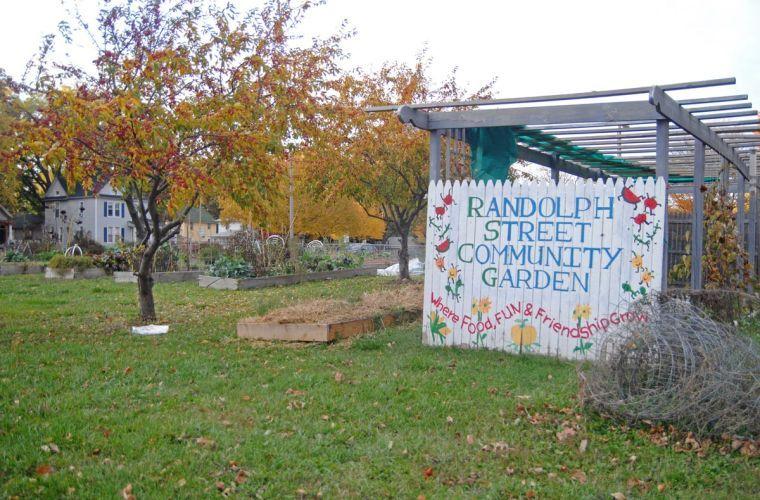 The Randolph Street Community Garden, on the corner of Randolph St. and Beardsley Ave., is a local volunteer-staffed garden where community members can come and grow their own produce.

The produce grown in the Randolph Street Community Garden has special powers. The produce may look like regular fruits and vegetables, but these crops have the ability to bring together an entire community, dissolve social barriers, and feed the disadvantaged in a space that is less than a half-acre of land.

The Randolph Street Community Garden, or RSCG, is a free public garden located near the intersection of Neil Street and Beardsley Avenue in Champaign, neighboring Stratton Elementary School. Community members can sign up to have their own garden plot to cultivate crops during the growing seasons.

“We like the aspect of community building that the garden represents,” said Dawn Blackman, the garden’s volunteer steward.

Everything from collard greens and tomatoes to plums and cherries are grown in the garden. Blackman is also making a new addition to her own garden this year: cucumbers. She pointed to a plastic ladder-shaped ornament resting on one of the beds.

“(The cucumbers) climbed up and down this, and we had a giant (one) this big!” Blackman said, holding her hands about a foot apart.

In the RSCG, anyone is able to become a volunteer gardener, as long as they pledge to maintain their plant beds and collaborate with others.

“I try to increase our numbers of gardeners every year,” Blackman said. “I do that by inviting people who come to us in need of food assistance, (and) ask them if they would like to grow some of their own for next year… And I just yell to people walking down the street, waiting for the bus, kids I find in the garden. They think they came in to steal something; next thing they know, they got a plot,” she laughed.

The food from the garden is distributed to a variety of places. Individuals who grow the food get to keep it or donate some of it, if they choose. A portion is also donated to the Eastern Illinois Food Bank or the food pantry at the nearby Church of the Brethren.

Members of Children in the Culture Club, an after-school program that Blackman leads, can sell their produce to earn their own money. To fund the garden, each year there is a cash crop sold in town. This year, it was sweet potato.

Of course, there are endless ways to use the garden’s produce. Dorothea Penn, a community member who has been gardening in the RSCG for three years, looks forward to cooking meals with her fresh veggies. This year, she made black bean salsa with her tomatoes, peppers and onions.

After moving to the Champaign-Urbana community three years ago from Tennessee, Penn was eager to become involved in the community. The RSCG provided the platform to do so.

“Everybody’s just so friendly, you know. People will water your garden if you can’t make it,” she said. “One year … me and Dawn (Blackman) would just spend the morning watering everybody’s garden … (Gardening in the RSCG is) just something I look forward to every year.”

These days, Penn tries to tend to her garden twice a week. Since she lives in a condo, she doesn’t have a backyard of her own in which to garden. The same goes for many local residents, so the RSCG is especially helpful in that aspect.

Blackman said that the garden started 12 years ago as an urban planning student’s project. After the student graduated, master gardeners took it over for three years, during which time Blackman became involved. Though she started with no gardening experience, she quickly learned the tricks of the trade.

“When the master gardeners were ready to withdraw (in 2006), I had a group of children who had already picked out their plants for the next year and were excited about growing,” Blackman said as she picked a few collard green leaves. “So I … found out how we could keep on, and here we are.”

The garden has come a long way. From June through September of this year, there have been over 6,000 individual visits to the garden, according to Blackman. Eight plant beds have grown to 42 over the years, and Blackman hopes to continue expanding in the future.

Contributing to these 6,000 visits were members of the Planners Network, a student organization at the University that focuses on community development in social justice. These students volunteer in the garden and even have plots of their own.

“Some planners have worked on (RSCG) as an important antidote: The garden is in an area that in (urban) planning terms would be called a food desert,” said Ken Salo, urban planning professor at the University.

A food desert is a community or neighborhood with a lack of accessible, affordable fresh produce or groceries. The problem worsens if the area contains low-income families. The garden, Salo said, helps to alleviate this issue by enabling local citizens to grow their own fruits and vegetables for free.

“In some ways, the garden has made the neighborhood and the school much more accessible, and also safer, because there are more people there,” Salo added.

The garden has truly changed the community in more ways than one, he said.

“The gardeners meet each other as equals,” he continued. “Whether you’re a professor or a student or unemployed or if you have a felony conviction, you’re all gardening.”

Since it is a long-term project from planting to harvesting, people get to know each other during the process. The garden also holds events such as picnics and volunteer days during the summer and fall months.

“I think it’s a good thing we have going here,” Blackman said, “Especially with the cooperation between ‘town and down,’—the students and people in town. I think there’s a lot of opportunity to increase the peace, so to speak, so that people don’t feel there’s two separate communities: the University and the town.”

Though the season is winding down as the temperature drops, several plots still show lush, leafy greens and carrot tops poking out of the ground. Although the produce stop growing in the winter, the sense of community that the garden holds will remain year-round.

“I just love the place,” Penn said. “Every time that I can talk to somebody that doesn’t know about it… I try to let them know. We have free plots and it’s nice, and you just meet a lot of new and nice people. It’s really something.”