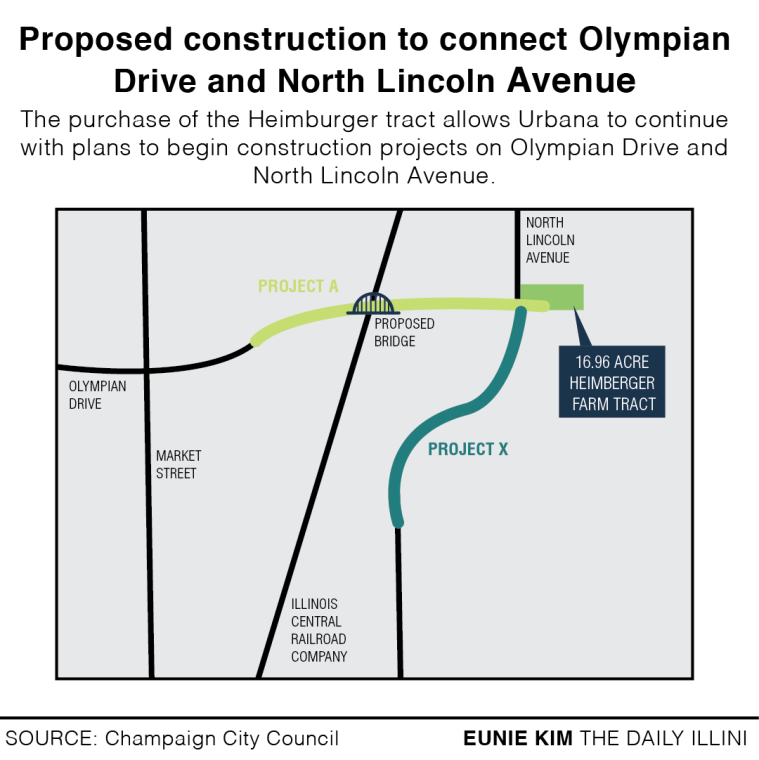 Urbana Department of Public Works signed an agreement on Oct. 23 to purchase 16.96 acres of land from the owners of Heimburger Farm near the 4800 block of North Lincoln Avenue.

The land is to be used in the construction of the Olympian Drive project. Once completed, the project will connect Olympian Drive with North Lincoln Avenue just west of the purchased tract of land. The project includes a bridge spanning five railroad tracks, which are owned by Illinois Central Railroad Company.

“This is a project that was approved many years ago,” said Urbana Mayor Laurel Prussing.

The land was purchased for $35,000 per acre or $593,600 in total. Bill Gray, director of public works, said the purchase was fully funded by Illinois Jobs Now! and that the city wouldn’t be paying anything out-of-pocket for the land. Furthermore, he said, the cost of the planned construction is entirely covered by Illinois Jobs Now!, the Illinois Commerce Commission and the federal highway bill.

While the tract lies just east of the planned construction, the land is an instrumental piece of the project, according to a memo from the Department of Public Works.

“The subject tract is necessary for use as a borrow pit for clay material to build the east bridge cone or embankment for the proposed bridge over the Illinois Central Railroad tracks,” according to the memo addressed to the City Council.

Once the clay is taken from the nearly 17-acre property, it will become a regional detention basin to collect run-off water.

The project will allow motorists a new route of traffic and commerce, Gray said.

Construction is slated to begin sometime next year, contingent on the Illinois Commerce Commission’s approval for the bridge. Until then, the owners of the Heimburger Farm have secured a lease on the land ata price of $1 a year.

Mike Madigan, Ward 6, said he was disappointed that the city wasn’t able to secure a more profitable lease.

“I understand we’re not trying to make money … (but) I think the city ought to be pursuing at least a little bit of cash rent while this project is yet to be underway,” he said.

According to the memo from the Department of Public Works, “If roadway construction does not commence by September 1, 2021, the Heimburgers will have a nontransferable right of first refusal to purchase the tract at a price no greater than $35,000 per acre.”

Eli can be reached at [email protected]