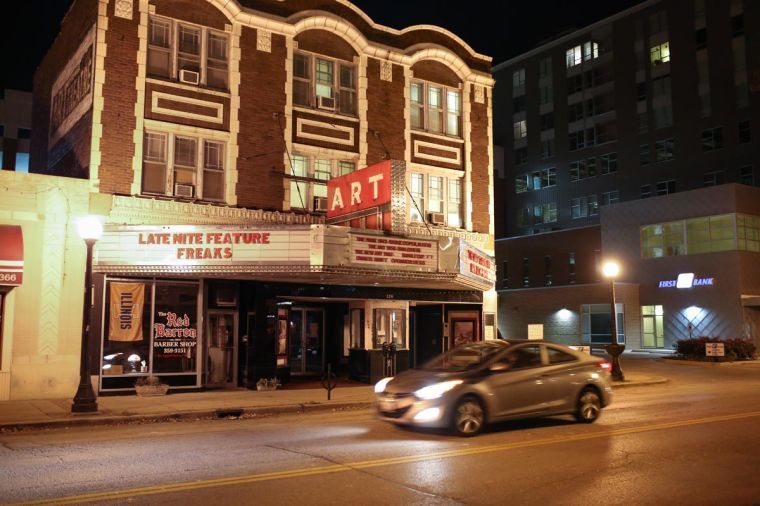 The Art Theater Co-op, located on Church Street in downtown Champaign, celebrates its centennial this week. It often plays contemporary films not shown at other local movie theaters.

The Art Theater Co-op in downtown Champaign will have first opened its doors to the public exactly 100 years ago on Tuesday.

For an entire century, the Art Theater Co-op has provided the Champaign-Urbana community with cinematic entertainment at its location at 126 W. Church St. To commemorate the milestone, the Art Theater Co-op will be holding a special celebration for its 100th anniversary, including the premiere of a documentary on the history of the Art Theater, the debut of a book about the theater, and a special performance by the Andrew Alden Ensemble.

With festivities starting on Tuesday at 6 p.m., guests can visit the Art Theater Co-op to learn about its history and view the documentary “The Art Lives,” produced by Luke Boyce of the Emmy-award-winning Shatterglass Studios. The new book, “The Art Theater: Playing Movies for 100 Years,” by Perry C. Morris, Joseph Muskin and Audrey Wells, will also be for sale. During the premieres on Tuesday, an “Old Hollywood” costume contest will be taking place, where the winner with the best costume will be awarded a copy of the newly released book. Food and drinks will be provided for all attendees.

At 8 p.m., the Andrew Alden Ensemble, a chamber music group, will perform an original score to a program of silent films curated by McCann. The ensemble will also play their score to Carl Dreyer’s vampire horror film “Vampyr” on Wednesday at 8:30 p.m.

Tickets for Tuesday’s events are $15 for co-op owners and $18 for the general public. They can be purchased online at the Art Theater Co-op’s website at arttheater.coop.

For Brandon McKay, freshman in LAS and frequent Art Theater Co-op moviegoer, the theater’s 100th anniversary is an exciting event he is looking forward to attend.

“I’ve never been to a movie theater quite as enriching as the Art Theater,” he said. “There are so many interesting artsy films shown here that I never would’ve even known existed. The theater has opened my eyes to new films and broadened my understanding of them.”

Although the theater shows many art and foreign films now, this has not always been the case. Since its opening 100 years ago, the Art Theater has been through some major changes.

Opened within a decade of the beginning of the movie industry, the Art Theater (then named the Park Theater) played silent Hollywood films.

The theater continued to show popular Hollywood releases for several decades. It wasn’t until the 1950s — when the theater was taken over by a new owner — that it was renamed the Art Theater and became part of the new burgeoning art house movement, playing independent and foreign films.

In 1971, the theater began showing only “adult” films as a way to differentiate itself from the larger theater chains that began to show art films as well.

But its career as an “adult only” theater was short-lived; in 1987, after being purchased by a new owner, the theater began playing art films once more. Then, in September 2012, the business became a co-op.

The decision was made to prevent a possible closing due to the movie industry switching to a digital cinema format. This required many theaters across the nation, including the Art Theater, to purchase digital projectors, which cost around $80,000.

By becoming a co-op, the theater was able to raise the necessary funds to purchase a new projector and keep the theater running.

“What the co-op does is formulate a vision of the organization based on what the co-op owners are looking for,” McCann said. “That’s preserving the classic movie-going experience, building an interest in co-ops, being the center of a vibrant community and building awareness about art films. My job is to steward this organization, so that it can realize those dreams.”

Today, the Art Theater Co-op aims to provide a unique movie-going experience unlike any movie theater in the area.

“I like to think of us as the hardest working movie theater in central Illinois. We’re always … trying to offer things to different audiences and trying to show movies unavailable anywhere else,” McCann said. “The Art Theater is where you can come see a movie and leave a changed person because the movie challenges you in some way.”

Z Snyder, assistant manager at the theater added that while the Art Theater Co-op enriches the community, the guests are what make the theater a great business.

As for the Art Theater Co-op’s future, McCann said he hopes the theater expands its reach and influence.

“I would love to see this business grow in different ways: to see our audience grow, to see the kinds of people that are coming in here grow,” he said. “I want to see a more actively engaged community of people who are interested in film in town, so taking the Art Theater’s end statements seriously, we want to be the middle of a vibrant community and build up an awareness of art house cinemas and what we work on.”

McCann hopes Tuesday’s festivities will be helpful in creating an even stronger bond between the Champaign-Urbana community and the Art Theater Co-op for many centuries to come.