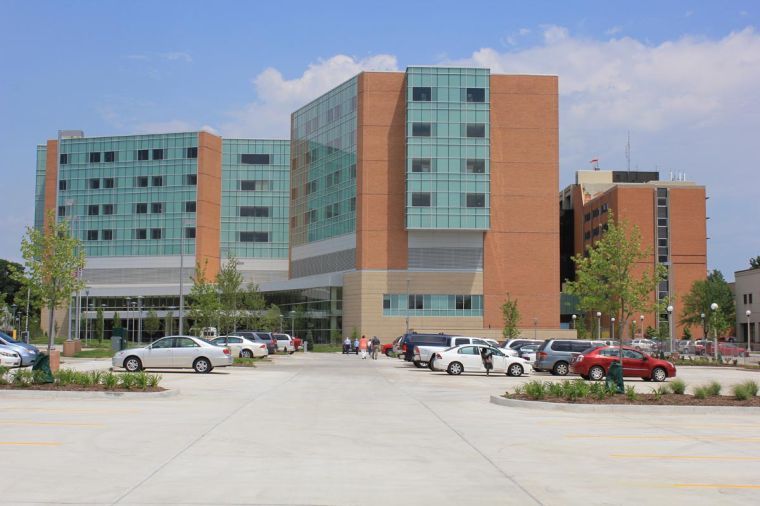 The newly opened nine-story Carle Tower houses 136 rooms and consolidates Carle’s Heart and Vascular services. Some student volunteers from the University have been moved to Carle Tower, where they have been able to provide more undivided attention to patients.

On University Avenue in Urbana, a bright red awning welcomes volunteers and visitors to the Carle Foundation Hospital Volunteer Services Office, located in the hospital’s North Clinic. For Nina Youssefnia, student leader coordinator for Carle’s college volunteer program and junior in LAS, this “Carle Red” signifies home. Youssefnia, who has volunteered at Carle since the first semester of her freshman year at the University, said it is the hospital’s sense of community that keeps her there.

Recently, she and other college volunteers at Carle helped the hospital transfer certain departments from the Rogers and Parkview buildings to the new Carle Tower, which became fully operational in late October. Located at the corner of Coler and Church streets, the nine-story tower centralizes Carle’s heart and vascular services and contains 136 private rooms.

Volunteers assigned to the departments that were transferred are already seeing the benefits of the move.

Kevin Yu, junior in LAS, is a volunteer and student leader for the cardiopulmonary department, which was moved to Carle Tower.

“I’ve talked to a couple patients who already think that the new units are very nice, very modern, and that they really demonstrate the commitment Carle has to patients and health care quality,” he said. “I think that just from the layout of the departments, it’s a bit more welcoming; the patients may be in better moods because of that. I think it really helps them, and it helps me as a volunteer, too.”

The first two floors of the tower contain doctors’ offices and outpatient procedure areas specific to the Carle Heart and Vascular Institute. Floors three through five are for mechanical space, and floors six through eight house in-patient departments that were previously located in the Rogers and Parkview buildings. Floor nine does not yet serve a department.

Each unit had to be moved one by one, and it generally took about a weekend to complete moving one unit, said Megan Holland, director of volunteer services. She said that a number of volunteers took an extra Sunday shift to assist with the transfer. They helped move patients and their personal belongings to the new unit, brought patients’ families to the new unit and cleaned up the old units.

Because all rooms in Carle Tower are private and house just one patient, it takes more time for volunteers to see each patient. Nonetheless, Holland said she thinks the transition to private rooms will help improve patient experience.

“The likelihood of a volunteer talking one-on-one to a patient is better; they will be given more undivided attention,” she said.

According to Holland, the student volunteers are “the first voices of the patients and a second (set of) hands to the staff.”

Their duties vary by department, but they usually perform small tasks, such as setting up beds or doing patient safety rounds.

Both Youssefnia and Holland stress that by being proactive, volunteers can be given more responsibilities, and even get to observe some procedures.

Youssefnia said that for her, volunteering at Carle is simply a validation of what she wants to do in her career. She mentioned that as a pre-med student, she often finds herself “buried in her books,” but that volunteering helps her remember the purpose of her studying.

“Stepping outside of the school setting, you go to the hospital, and you have this positive experience with patients — you feel like you’re making a difference, and it validates everything you’ve been doing in school,” she said.

This semester, Carle’s college volunteer program has 561 student volunteers, who make up roughly 50 percent of the volunteer population at Carle. The deadline for applications for the spring 2014 program is Nov. 15.

“There’s always a need for volunteers across the board,” Holland said. She said that with the transition to private rooms, “units may be asking for multiple volunteers where they have just had one in the past, because there’s just that much more space to cover.”

Bridget can be reached [email protected]