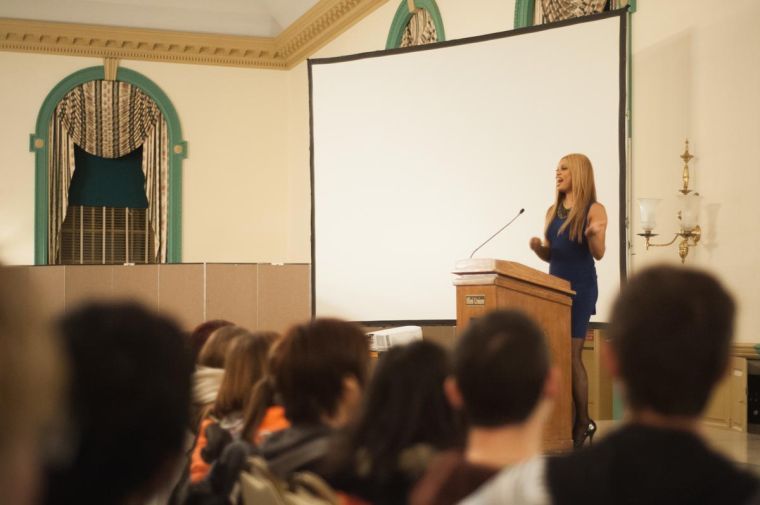 Since third grade, Laverne Cox said she knew she was a girl, not a boy, like her twin brother.

The actress and activist, who has a recurring role on Netflix’s “Orange is the New Black,” spoke Tuesday night in an Illini Union ballroom so packed that the room’s partitions were moved away to make room for more seats. (“Oh my god, they’re adding chairs for little ol’ me?” she said with a characteristic hair toss.)

Cox is the first African-American transgender woman to have a major role in a television drama series, but she also is the producer and co-host of the VH1 reality series “TRANSform Me,” which won a GLAAD media award in 2013. On “Orange is the New Black,” the actress plays Sophia Burset, a transgender woman struggling with issues of love, sex and even hormonal replacement.

For the majority of her talk, Cox spoke about her upbringing and career and the “state of emergency for many trans people across the country.” She said that transgender women of color face more bullying and ridicule than other members of the LGBT community.

Cox began her transformation while in college in New York City, where she continued to pursue the arts. Her first major venture into gender nonconformity included a shaven head, fake eyelashes and flair bell-bottom pants. In the Big Apple, she learned — after men cat-called her, only to ridicule her upon discovering she was transgender — that black transgender women sit at the “intersection of trans-misogyny and race.”

This point was a key reason that the LGBT Resource Center hosted the talk. The sponsors wanted to give more attention to this subset of the LGBT community, which tends to emphasize gay and lesbian issues, said Saida Bonifield, assistant director of the center.

Growing up in Mobile, Ala., which was the center of much of the civil rights movement in the 1960s, Cox said “there was almost always someone who wanted to beat me up” in an effort to “police” her gender.

Once, her teacher called her to the front of the classroom because Cox was waving a hand fan, pretending to be Scarlett O’Hara of “Gone with the Wind.” Her mother later received a call from the school: “Your son is going to end up in New Orleans wearing a dress if we don’t get him into therapy.”

And to therapy she went. Here, her mother learned that Cox viewed herself as a girl, not a boy, which angered her mother. Home life was tough, she said, because she didn’t feel safe at school nor at home.

“Where I did feel safe was my imagination,” she said.

She said her mother finally came around to accepting Cox as a daughter years later, even taking pride in Cox’s television appearances.

“Getting the pronouns right was a big deal for my mom,” Cox said, referring to the difficulty her mother had in accepting Cox’s gender.

On her tour to several colleges, Cox advocates for the LGBT community.

“She is a very well-known actor for her role on ‘Orange is the New Black,’” Bonifield said. “Within the character (she plays), she is an advocate for the LGBT community. … Not only is she an actor — there are not a lot of trans actors in Hollywood — but, in addition to that, she is an advocate.”

For Bonifield, another part of the interest in bringing her to campus was that Cox is African-American and a woman, which Bonifield said are voices not often dominant in national discussions.

“We need to make sure that everyone’s voices are heard,” Bonifield said.

Given the laughter from the crowd in the ballroom, it seemed her message was well-received.

“Laverne is very sharp and very relatable,” said Mel Milewski, junior in LAS. “It’s always nice to have someone who can speak about this stuff and be understandable. Usually the focus is just on the ‘L’ and ‘G’ (of the LGBT community).”

Cox came to the University amid major victories for same-sex couples and the LGBT community, including transgender people. Last week, both the state House of Representatives and Senate passed a same-sex marriage bill, which will make Illinois the 15th state to pass such legislation. Gov. Pat Quinn said he would sign the legislation on Nov. 20 at the University of Illinois at Chicago.

Ryan can be reached at [email protected] and @ryanjweber.