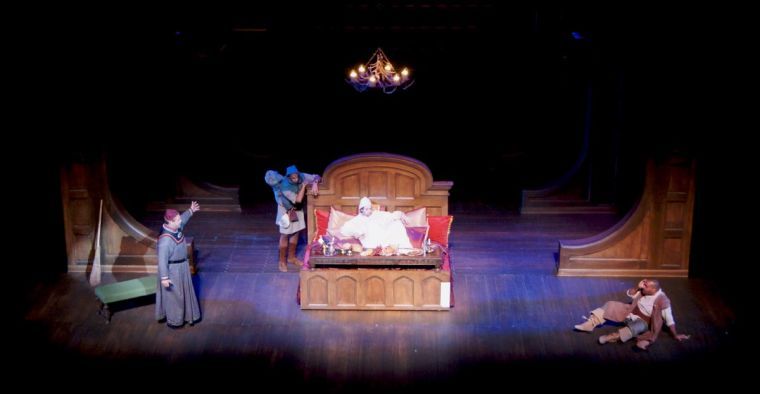 Students rehearse the opera “Falstaff” in the Tryon Festival Theatre at Krannert Center for the Performing Arts on Tuesday. The opera opens Thursday night to celebrate the composer Giuseppe Verdi’s 200th birthday.

On Thursday night, a classic tale of romance, revenge and comedy will come to life in the School of Music’s production of the opera “Falstaff.” First cast in early September, this production has taken months to prepare for its performances Thursday through Sunday at the Krannert Center for the Performing Arts’ Tryon Festival Theatre.

Last performed at Krannert in 1986, the opera’s performances will celebrate the 200th birthday of its composer, Giuseppe Verdi. Verdi is a classical 19th-century Italian opera composer who is famous for a variety of operas and musical compositions. Along with “Falstaff,” some of his renowned musical creations include “Rigoletto,” “Don Carlos” and “Otello.” The show will be part of the School of Music’s Opera Program Series.

The story primarily follows a young ex-knight named Falstaff through a hybrid plot devised from Shakespeare’s “The Merry Wives of Windsor” and some of “Henry IV.” A man of great appetite for food, drink and women, Falstaff realizes he is in desperate need of money. As a result, he attempts to use his wit to change his lack of wealth and find fortune.

“Falstaff lives in quite a bit of squalor with his henchmen,” said Kathleen Conlin, stage director-in-residence of the opera and Barnard Hewitt professor of theatre. “He decides his means of getting money will be wooing a wealthy woman in town.”

Unfortunately, not all goes according to plan, and he embarks on an adventure in this charismatic story. The opera follows a variety of characters, such as the town’s women who attempt to find revenge; his rival, the husband of the woman he is trying to pursue; and a young couple who have a side love story all their own as Falstaff goes on his journey throughout the performance.

As stage director, Conlin has been a part of the opera’s development since step one.

“The stage director is primarily in charge of developing the concept of the production, from working with the designers to establishing a visual world for the production,” she said.

Conlin and Eduardo Diazmuñoz, the artistic director and conductor for the performance, have worked for more than two months to prepare for the opera.

Like most classical operas written in a native European language, “Falstaff” will be performed in Italian.

“All opera, for the most part, is sung in German, French or Italian, so opera students are required to learn various languages,” Conlin said.

The cast performing in the opera are required to learn and perform the songs in Italian, but the audience will be provided with English supertitles, a written translation projected above the stage throughout the duration of the show. The cast comprises students of the University, with the exception of one guest performer who is a professional opera singer.

The performance will be shown Thursday through Saturday at 7:30 p.m., as well as a matinee on Sunday at 3 p.m. Single tickets are $27, with discounts for senior citizens, students and University students at $23, $18 and $10, respectively.

Christina can be reached at [email protected]