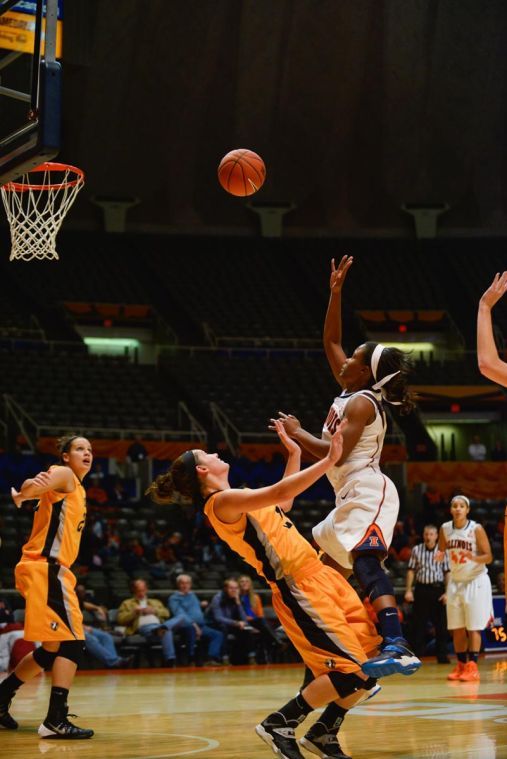 Illinois guard Sarah Hartwell (0) shoots the ball during the game against Valparaiso at State Farm Center in Champaign, Il. on Tues, Nov. 12, 2013.

The Illinois women’s basketball team will get limited rest after earning its first victory of the season Tuesday night against Valparaiso.

The Illini are back on the hard court Thursday night when they host Mississippi Valley State at State Farm Center at 7 p.m.

In the Illini’s home debut, it was the defense that showed improvement after the team gave up 98 points to Bradley in the season opener Nov. 8. Holding Valparaiso to 38.2 percent from the field was a significant improvement over allowing the Braves to shoot 51.5 percent overall.

“It was great to see our (man-to-man defense) give us a lift and do some things right in our man defense,” head coach Matt Bollant said after the 87-59 win over Valparaiso. “Bradley got a lot of really good looks so we did a better job of contesting shots and making things tougher.”

In the team’s first two games, it has been transfer point guard Sarah Hartwell who has been the Illini’s most efficient scorer. After sitting out all last season due to transfer rules, Hartwell is averaging 16.0 points per game to go with a team-high 4.5 assists per game. Her effectiveness in getting to the basket shows on the stat sheet, as she is shooting a scorching 58.3 percent from the field.

“I feel like my main job as a point guard is attacking the rim,” Hartwell said. “If I get stopped, I can kick it out to Amber (Moore) or whoever is open. But they were sagging mostly or switching on ball screens so it was easy to attack hard off of the screen.”

Illinois’ opponent, Mississippi Valley State, will still be searching for its first victory of the season when the team travels to Champaign. The Devilettes dropped a 79-60 contest at Northern Illinois on Tuesday and were swept in their two contests of the Glass City Tournament, losing to Toledo and Villanova.

The strength of the Devilettes team is in the post area, which would cause matchup problems for the Illini.

Forwards A’Shanti Weathers and Ashley Beals led the Devilettes against the Huskies in offense and protecting the rim. Weathers tied a career-high with 20 points, while the freshman Beals chipped in 14 points, seven rebounds and four blocks. Another freshman, center Heather Freeman, contributed 10 points and six rebounds in just 14 minutes of playing time.

Illinois will need their own freshmen tandem of Jacqui Grant and Sarah Livingston to elevate their games in the post. The battle between the newcomers has been up for debate since they arrived on campus, but Grant seems to have solidified herself as the starter at the center position.

“Her length makes a difference for us,” Bollant said. “She can shoot the basketball and she’s really skilled. She’s going to be able to do a lot of different things for us.”