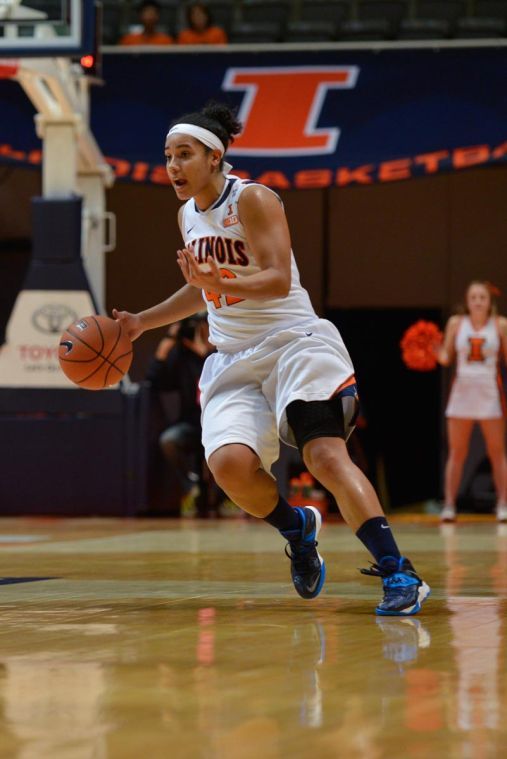 Illinois' Amber Moore dribbles the ball during the game against Alcorn State at State Farm Center on Sunday.

When team leaders Karisma Penn and Adrienne GodBold graduated at the end of last season, nobody, not even head coach Matt Bollant, knew who would step in and replicate their production.

Now, the answer is becoming clearer.

Freshmen forwards Jacqui Grant and Sarah Livingston have stepped up and contributed in the team’s three consecutive wins. Grant is the team’s only post player in the starting lineup but has shown versatility and efficiency in her young career, hitting four of 11 3-pointers attempted and 11 of 12 free throws. She also is fourth on the team in points per game with 14.3 and second in rebounds per game with 7.3. Livingston, who backs up Grant, had a breakout performance Sunday against Alcorn State, as she notched her first double-double of her career, scoring 12 points and grabbing 12 rebounds to go along with five blocks and three steals in the team’s 112-28 win.

After the game, Bollant praised Livingston’s performance and said her and Grant’s development are vital to the team heading forward.

Amber Moore’s 27-point, 19-rebound performance this past Thursday against Mississippi Valley State helped earn the senior guard her first conference player of the week award. The line was Moore’s second double-double of her career. Her play helped the Illini to a 3-0 record for the week as she averaged 25.0 points, 10.0 rebounds, and 2.7 steals per game over that stretch. She also broke the Illinois record for career 3-pointers made against Mississippi Valley State and now has 229.

Sophomore transfer Sarah Hartwell jumped in as the team’s starting point guard, replacing the injured Alexis Smith this season despite not playing a single game last season because of transfer rules. Through four games, she is third on the team in points per game with 14.8 and first in assists per game with 4.75. Her aggressiveness when driving to the hoop has gotten her to the foul line a team-high 19 times so far this year. She has converted 15 of those attempts for a .789 percentage.

“The biggest thing for me offensively is to attack the hoop,” Hartwell said. “The more you attack, the more fouls you’re going to get. I was just trying to attack and get my team points and score.”

Attacking the basket was the downfall of Illinois in its 98-92 loss against Bradley. The Illini attempted only two free throws all game to the Braves’ 25 attempts. Since then, Illinois has averaged 26.3 free throw attempts per game.