Ekey’s production can no longer be ignored 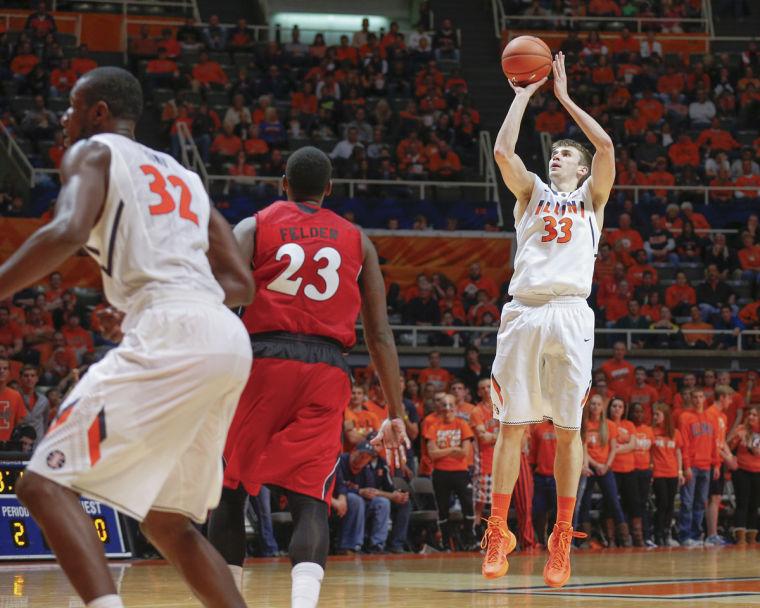 At his first news conference of the year, John Groce answered questions about everything — his four returning players, his five freshmen, his transfers who had to sit out and recruiting — but one person was largely ignored.

Only one question, the second-to-last question, was asked about Jon Ekey, a projected starter and fifth-year transfer from Illinois State. Ekey wasn’t on people’s minds, but Groce spoke highly of Ekey and said he had graded out higher than anyone else in practices and was the most consistent player for the Illini.

He grabbed 15 rebounds against Valparaiso on Nov. 13, including eight offensive boards. Whenever he couldn’t grab the ball, he would tip it out to his teammates giving them second and third chances on baskets.

After the first three games, Ekey had shot 3-for-12 on 3-pointers and averaged just five points per game. But his offensive prowess — something highly touted by Groce — was on display Sunday when he scored 19 points, shooting 5-for-7 on 3-pointers, against Bradley.

He made athletic plays, barely missing a ferocious put-back dunk.

Before the season, Ekey was often compared to Tyler Griffey. Both are tall, mousy forwards with the ability to make long-range shots. Ekey’s coach and teammates said the comparisons weren’t merited.

“They both can knock down open shots and will play hard for you, but they don’t really have a similar playing style,” Joe Bertrand told The Daily Illini in October.

Ekey has demonstrated his differences with powerful dunks and, despite being two inches shorter than Griffey, with more of a knack for finding rebounds.

Instead, Groce has started comparisons to another member of last year’s team: Sam McLaurin. He said they are both leaders in their first year on the team as fifth-year transfers.

Like McLaurin, Ekey has found a way to contribute quickly, more quickly than Groce expected.

Groce said Illinois’ defense is much further along this season than it was at this time last year, and he attributes much of that to Ekey’s intelligence.

“Jon is an enigma a little bit. That’s why I keep talking about his intelligence,” Groce said. “For him to pick up what we’re doing as fast as he has since the summer speaks volumes about No. 1, his coachability, and No. 2, his teachability. That’s rare, his IQ.”

Along with his intelligence, Groce said Ekey’s consistency has been crucial to his success.

“Jon is consistent, which is awesome. I know what I’m getting every day from Jon when I go to practice,” Groce said, saying Ekey will rank in the top three in rebounding and take and make open shots. Ekey has consistently graded as one of the top Illini in practice.

“Coach is always saying we are what we do every day,” Ekey said.

So far, the consistency and grading out in practice has turned into production on the court — production that can no longer be ignored.