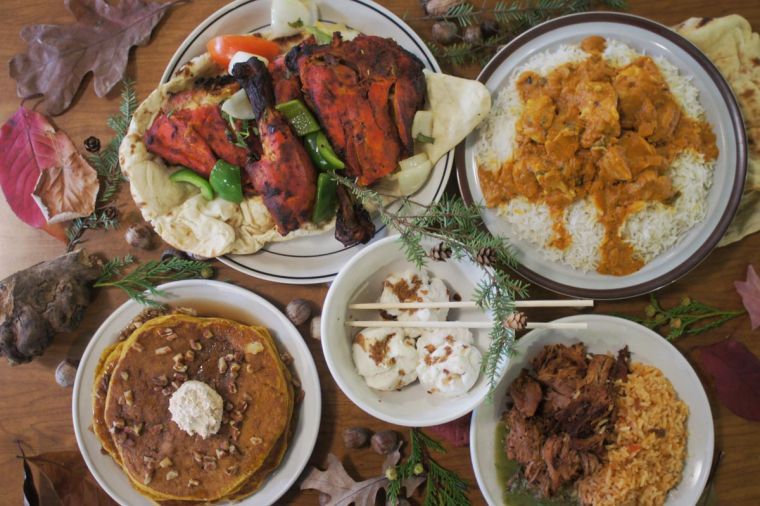 It is the typical scene at American dinner tables on that fourth Thursday in November: Dad, almost ritually, sharpens his knife to carve up the gobbler, mom transports the last casserole tray from the oven to the table and the rest of the family salivates at the spread of green beans, mashed potatoes and cranberry sauce. It is like all of it is out of a Norman Rockwell American portrait.

The Thanksgiving meal has been a quintessential family tradition ever since the pilgrims met Squanto all those years ago in Massachusetts. On that fateful day in 1621, the pilgrims and Wampanoag Indians probably were not feasting on turkey, pumpkin pie and yams baked to perfection. Rather, it is probable that the meal consisted of venison, corn, cranberries and shellfish.

It was not until centuries later that the Thanksgiving meal staples known today were introduced. Potatoes were brought up from South America and sweet potatoes from the Caribbean. Turkey was not even popularized until the 20th century when the media dubbed the holiday “Turkey Day.”

Leaving the turkey out of the feast, as unfathomable as it may be to some people, might not really be that un-American after all. And with all the cuisine changes throughout the years, the “traditional” Thanksgiving meal may not have the same meaning years from now. At least that is what some Champaign-Urbana community members seem to think.

Sarad Sharma, 59, is of Nepalese descent and works as a chef at Bombay Indian Grill. During his usual travels to visit family in Colorado, Kansas or New Jersey for Thanksgiving, he and his family often bypass the traditional spread and fire up the grill.

“We generally use the barbecue,” Sharma said. “It doesn’t matter if we’re cooking Tandoori (chicken) or not. We set a wood charcoal grill and barbecue the turkey that has been marinated overnight in spices.”

Stepping into his kitchen, Sharma showed the yogurt spice blend that he marinates chicken in at work, the same marinade he uses for the barbecued turkey. A mix of chutney and different flavors  — with mint and Tamarind being favorites — marinates overnight to later add flavor to an array of traditional Indian side dishes.

Eric Zhang, freshman in Engineering, described a similar structure to his traditional Thanksgiving meal, where his Chinese-American heritage sees more Chinese dishes being served at the table than the American counterparts. His family trades ham, gravy and stuffing for sweet and sour fish, tofu soup and pot stickers. In fact, the turkey is still there, but just about everything else is not.

“I usually eat Asian food, Chinese food — all of that.” Zhang said. “We try to make the turkey, but we do it Asian-style. We get this ginger seasoning; it doesn’t taste like turkey afterward.”

Provided his background, Zhang sees a change in what the traditional Thanksgiving meal could become for America.

“Before, in the like ’50s, it was this all-American meal with mashed potatoes. But now it’s spreading out and each culture has its own Thanksgiving dinner traditions,” he said. “Thanksgiving is being brought in for more and more people.”

Jaime Garza, freshman in Business, has his own tradition in a country that he said has become his second home.

“I don’t have family here; it’s just my parents and my siblings. We came here from Mexico when I was three,” Garza said. “For Thanksgiving, we get with family friends and the moms cook.”

Despite the strong Latin American influence in their holiday meal, Garza’s family always leaves room for the gobbler.

“Our Thanksgiving is a mix of Mexican and Guatemalan. We do Puerto Rican rice, and we do other Thanksgiving meals with frijoles (beans) and salchicha (sausage),” he said. “I think the most Mexican thing is tamales, and my aunt makes carnitas (braised pork). But the turkey is always there.”

Thanksgiving night at the Garza’s ends with a cardio workout.

“One of my godfathers plays in a band, and later in the night, his band plays for us and everyone just dances,” he said.

Although he admitted the meal plays a big part in the holiday, Garza said Thanksgiving is about more than just food.

“I think people just look at it as a time to get together with their family,” he said. “I like it; it’s a nice holiday. It’s one of my favorites.”