UI student appreciates one more Thanksgiving with her sister 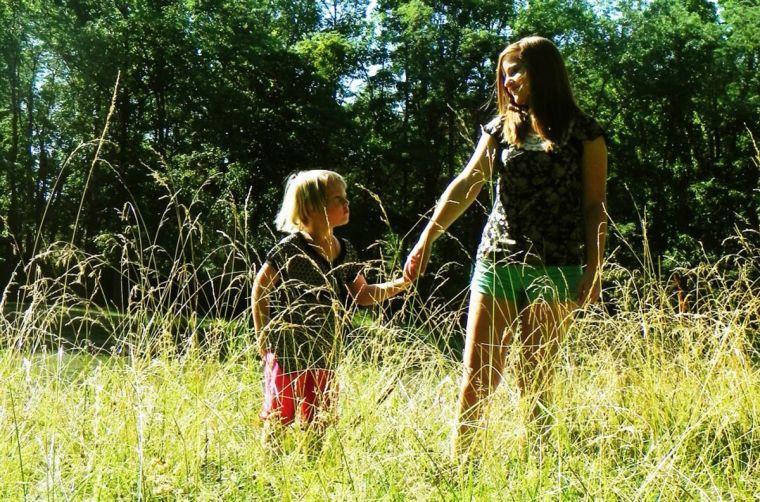 Seven-year-old Christina loves anything and everything pink. She wears her tutu to play in the mud. When she went to Disney World with her family, she enjoyed “It’s A Small World” and a lunch with princesses. When her sister, Margaret Johnson, junior in Media, visits home in Greenfield, Ind., she shows her all of her new things and they play with their three dogs and cat. But this Thanksgiving, Johnson is especially thankful for the chance to spend time with Christina.

About two years ago, Christina was diagnosed with brain cancer, and doctors predicted last Thanksgiving would be her last.

“They called me in the middle of the night saying, ‘Your sister is in the hospital. We don’t know what’s going on, but I wanted you to know,’” Johnson said. “And I stayed on the phone with my mom for an hour. I knew I had so much stuff I had to do at school, but I had to get home. So I left that morning and I drove two and a half hours to my sister’s hospital, and that’s when they told me that she had cancer. They hadn’t even found out when my mom was on the phone with me.”

When Johnson walked through the doors of Riley Hospital for Children in Indianapolis, Ind., she was in shock. She entered a small room with her mom and step dad and felt as if all of the air left from her lungs.

“I know I was breathing, but I felt like I wasn’t breathing,” Johnson said. “I didn’t believe it. I just thought there’s no way that those symptoms could mean she has cancer. She’s a five year old; she can’t have cancer. I was really just angry and in denial and shock, and it was a lot of stuff going through my mind.”

Prior to Christina’s diagnosis, her family noticed a sharp transition from her normal self. Her attitude gradually changed once she entered kindergarten, her tantrums were more severe and intense, and dizzy spells were persistent.

“She would hit me and scream so loud you could hear her outside,” said Lori Kellermeier, Christina’s and Margaret’s mom. “The pediatrician could not find anything but I knew it was something. Then she started getting clumsy and falling.”

Eventually, Christina lost all feeling on the left side of her body. On the day she lost the ability to walk, Kellermeier took her to the doctor and Christina was immediately rushed to an ambulance. She was diagnosed with brain cancer, and the next morning she was admitted for surgery.

“I asked the doctor while crying uncontrollable, I asked over and over, ‘Is my baby girl going to die?’” Kellermeir said.

Due to the size and proximity to the spinal cord and brain, the tumor was inoperable.

According to doctors, Christina had a 10 percent survival rate.

In the first surgery, surgeons placed a shunt, or a small plastic tube that goes into one of the ventricles in the brain, through a small hole in the skull. The shunt drained away excess cerebrospinal fluid and relieved pressure from the tumor. The following day, against Christina’s refusal, a port was inserted into her chest so she could receive chemotherapy and make drawing blood easier.

After her surgeries, Christina resided at the hospital for a little over a week, and began radiation treatments on Dec. 5. By the fifth radiation, Christina’s family saw a huge improvement, and she regained mobility in her body. Within a month, she was running again.

“She was always so determined and she would just tell people, ‘I have a brain tumor, but it’s gonna go away. I’m gonna make it go away, and I’m not gonna be sick anymore,’” Johnson said.

True to her words, Christina’s tumor shrunk to a manageable size, and it doesn’t affect her life. However, Johnson’s family spent the first year after her diagnosis holding their breath, watching for every little symptom.

Last March, she began chemotherapy. Halfway through the treatment, Christina’s hair began to fall out in large clumps.

Every time Johnson returns to campus and leaves Christina’s side, she pushes the negative thoughts away and focuses on her schoolwork.

It is the moment before sleep that is the hardest for Johnson.

Yet, classes and clubs keep her busy, and her friends and family provide constant support.

“When Maggie gets news back from her mom about what is going on with Christina, all I can do is listen,” said Nicole Wonderlin, junior in LAS. “I think it just helps to have someone to talk it through with. I try to be honest with Maggie and never give her cliche responses to her worries like ‘everything happens for a reason’ or ‘it will all work out.’”

After traveling to Disney World last May with Christina on a Make-A-Wish trip, Johnson joined Wishmakers at UIUC, a registered student organization that raises money through fundraisers on campus for the Make-A-Wish Foundation of America. Johnson is the event coordinator for Wishmakers and she shares her experiences with others every year.

This past June, Christina finished chemotherapy. Today, she looks and acts like a typical second-grader. She hates homework, she likes getting her nails done with her sister and her favorite food is a McDonald’s cheeseburger Happy Meal.

However, within a matter of seconds, her condition could change. Due to the location of Christina’s tumor, it can never be fully removed.

“It’s definitely put things into perspective for me and my entire family,” Johnson said. “Even though she’s healthy right now, at any moment, it could come back, and at any moment, we could lose her.”

Johnson was told not to expect another year with Christina. But she’s thankful she was given one.