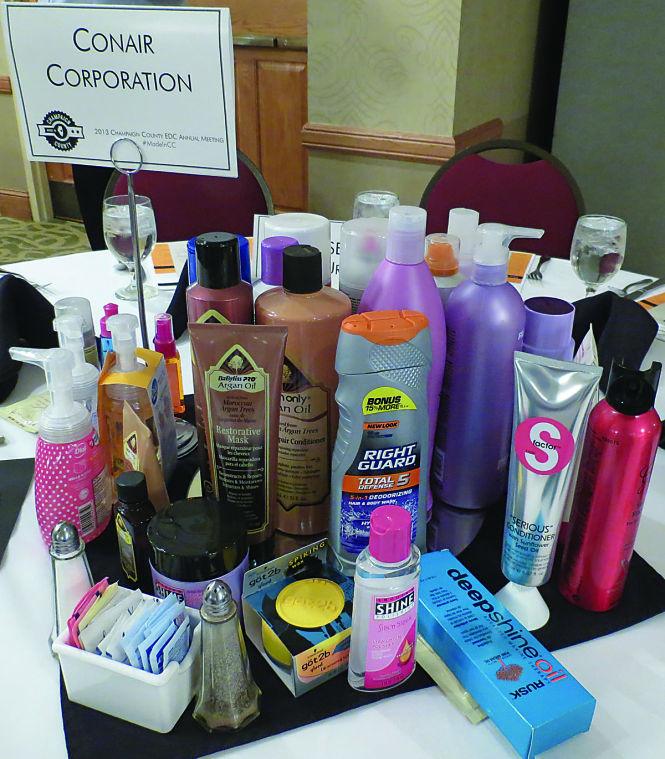 Conair showcases their line of products at the annual Economic Development Corporation meeting at Hawthorn Suites on Thursday.

The Economic Development Corporation held its annual meeting at Hawthorn Suites in Champaign on Thursday, where they highlighted products and innovations made in Champaign County and presented their two-year strategic plan that aims to create growth in the area.

The theme is chosen depending on events that have happened during the year, and this year’s theme had been chosen because the corporation was often surprised at the products made in Champaign.

“We had such great participation from local companies,” said Carly McCrory, communications director for the corporation. “They were more than willing to loan products for display, which was excellent. We were able to provide information to attendees about products, and we received several compliments about how great it was to learn more about the products and realize how many cool things are made here.”

Local businesses were invited to the event, with tickets selling for $35 per person for investors, $40 per person for non-investors and $300 for a table that seated 10 people.

Investors give money to the corporation to fund economic development projects such as retention and expansion programs.

There were 15 tables for guests at the event, and each table in addition to others around the room focused on a different company and its products. Biography cards were placed on each table, which included information about the company, their featured products and fun facts.

“(The event had) a great turnout, and I like the feature of allowing companies to demonstrate their products,” said Lee O’Neill, executive director of Urbana-Champaign Angel Network.

Urbana-Champaign Angel Network matches startup companies with investors to further economic development. O’Neill said startups are key to continued growth in the community, and is excited to see such companies featured at the event.

McCrory discussed the network in her presentation, along with the corporation’s business retention projects and their attempts to “refresh and expand” their social media presence. Attendees were encouraged to tweet throughout the event using the hash tag: #madeincc.

The corporation officially unveiled its new strategy to local businesses at the meeting. The strategy calls for providing support to create 3,000 new jobs, attracting $225 million in new private investment, assisting companies to grow payroll by $132 million and increase private sector influence by doubling the number of private investors in the corporation.

“Economic development is a process, not a goal,” said Erik Kotewa, deputy director of the Economic Development Corporation. “This is not the end, it’s a living document. Our partnerships build networks through which we get things done.”