The man behind the trans fat ban 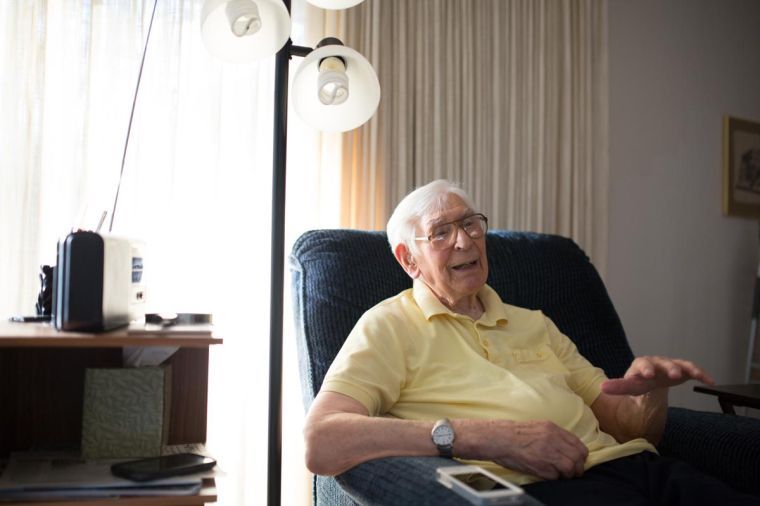 Fred Kummerow, emeritus professor of comparative biosciences, sits in his Urbana home, discussing his life’s work of heart disease research and campaign to ban trans fats. On Nov. 7, the FDA announced its plan to ban the substance from all foods.

In Fred Kummerow’s home in Urbana, a small slate plaque reads “I am still learning.” Michelangelo recorded this quote when he was 87 years old. For Kummerow, who is 99, these are the words he has lived by his whole life.

Kummerow is an emeritus professor of comparative biosciences at the University. He is renowned for his research in heart disease, specifically the dangers of trans fat. After campaigning for over 50 years to eliminate the substance, Kummerow’s appeals have finally been acknowledged by the Food and Drug Administration, who announced their plan to ban trans fat on Nov. 7.

Five days after the FDA’s announcement, Kummerow sat in a blue armchair in his living room, telling the story of his dedication to heart disease and nutrition research. During his lifetime, he has published 460 papers in peer-reviewed journals, written two books and traveled to 26 different countries. Despite retiring in 1978, Kummerow continues to work, hoping to learn even more.

Kummerow’s interest in nutrition began as a child. He was born in Berlin, Germany, in 1914 into a poor family. His father worked on the railroad, filling the lamps at switches. He would pour the leftover kerosene into a flask in his pocket and bring it home to Kummerow’s mother, who then traded the fuel for food. The little amount she brought home kept the family alive.

“My mother would feed us … a slice of bread with some sugar on it with coffee for taste,” Kummerow recalled.

In 1923, nine-year-old Kummerow and his family immigrated to the United States. Relatives in Milwaukee, Wis., who worked at a concrete block factory secured a job for his father.

Kummerow was first exposed to science at age 12 when he received a chemistry set from a relative. He proceeded to take three years of chemistry at the Boys Technology and Trade School, a high school in Milwaukee.

After graduation, Kummerow attended the University of Wisconsin Extension Division night school. He took night classes while working 48 hours a week at a wholesale drug company. Kummerow only took classes in German, French and English, however, because chemistry classes were not offered at night.

In order to pursue his passion for chemistry Kummerow quit his job. He worked the remainder of the summer at Miller Brewing Company and earned $300, enough to afford his first semester at Wisconsin-Madison University.

During his first semester, he had to double up on freshman chemistry and organic chemistry to catch up with other students. He was proud to receive an A in both. Kummerow also worked as an assistant in the biochemistry laboratory to continue paying for his schooling. In 1942, Kummerow married his late wife, Amy, with whom he had three children. After years of hard work, Kummerow left with a master’s degree and a Ph.D. in biochemistry in 1943.

Next, Kummerow acquired a research position at Clemson University in Clemson, S.C., and studied Pellagra, a disease caused by a deficiency in the vitamin niacin. At the time, the disease was prevalent in the southeastern U.S., where many people consumed large amounts of corn. Kummerow added niacin to corn mixtures like grits, and deaths from the disease dropped.

“I know firsthand the impact of adding necessary ingredients to food and the difference that it makes in people’s lives. I know that a vitamin lacking in the diet can kill someone, and I know this can be changed,” Kummerow said in his 2008 book, “Cholesterol Won’t Kill You But Trans Fat Could.”

In 1945, Kummerow moved to Manhattan, Kan., to work at Kansas State University, where he started a lipid chemistry program. While there, he received a grant from the U.S. Army Quartermaster Corps to find a way to keep frozen turkeys fresh during travel. His team preserved the fat in turkeys by changing their diets.

As Kummerow explained his turkey research process, his face lit up with pride. He has smiling eyes, which squint happily behind his framed glasses.

“Today, you can buy a frozen turkey because that was the kind of diet that turkeys have been fed ever since,” he said.

In 1950, Kummerow moved his lipid chemistry program to the University. He began researching heart disease and trans fats after President Dwight D. Eisenhower had a heart attack in 1955. This increased public interest in heart research and Kummerow was able to receive grant funding from the National Institutes of Health.

“I have to get money for all of (my research). In fact, I have never used University money. I’ve always gotten grants, and I’m still getting grants,” he said.

While most scientists agree that heart disease stems from cholesterol, Kummerow believes it comes from trans fats — fats made with 14 synthetic compounds that are found in products such as margarines, fried foods and cake mixes.

According to Kummerow, trans fat originated in 1910. People called it the “miracle fat” because it was easier to bake with than lard and had a better consistency than butter.

“When you take butter out of the refrigerator, you have to wait a little bit for it to spread … (with) margarine, you don’t have to do that. People loved that, but they didn’t realize how dangerous this stuff was,” he said.

A diet rich in trans fat causes the body to produce less prostacyclin, which helps blood flow in the arteries. Without it, blood clots form.

“I think the lesson of this whole thing is don’t tamper with nature. They were making 14 different fatty acids that had no business being there,” Kummerow said.

In 1967, Kummerow worked with the food industry to lower the amount of trans fat in processed foods, but he would not rest until they were banned completely. In 2009, 42 years later, little advancement had occurred, so Kummerow sent a petition to the FDA to ban trans fats.

Regulations require the FDA to answer petitions within six months. However, in 2012, the petition remained unanswered. Greg Weston, a lawyer based in San Diego, contacted Kummerow and filed a lawsuit in his behalf.

“I have been doing the same thing as Dr. Kummerow has been doing but from a legal angle and trying to get trans fat banned,” Weston explained.

In response to the lawsuit, the FDA announced its plan to ban trans fats. But both Kummerow and Weston know the ban is not final and could take years to implement.

Weston said that consumers who want to support Kummerow and speed up the ban process can submit formal comments online to the FDA at regulations.gov.

“I would appreciate consumers putting in a comment … just to say that they support the ban and that is something that (the FDA) takes into account … the positive and negative comments in making their decision,” Weston said.

Currently, Weston talks on the phone with Kummerow about once a week.

“I don’t think anyone has done more to figure out the exact chemical pathways that trans fat causes damage to the cardiovascular system,” Weston said. “And he is doing that despite his advanced age and not tiring until he finishes the process.”

Weston is not the only person to attest to Kummerow’s character. Illinois research associate professors Sherry Qi Zhou and Mohamedain Mahfouz are both his friends and colleagues.

Zhou and Mahfouz began researching heart disease with Kummerow in the 1980s at his Burnsides Research Laboratory in Urbana.

“He gives you scientific freedom. Whatever idea you have, you can do it, as long as it is within the line of work,” Mahfouz said.

Zhou considers Kummerow to be a friend or father figure rather than a boss. Mahfouz said they both were always invited to Thanksgiving and Christmas celebrations at Kummerow’s home.

Mahfouz said that some may believe that once people reach a certain age, they should just stop working and enjoy their lives. However, he said he thinks Kummerow “is becoming more scientifically aggressive.”

Kummerow’s dedication to nutrition carries over to his personal life. He eats one egg each morning and drinks three glasses of whole milk every day. Not surprisingly, he stays away from fried and processed foods that contain trans fat.

“When my brother, sister and I come to the house, we call it the health spa,” said his daughter, Kay Kummerow. “We eat so many fruits and vegetables and protein.”

Wearing New Balance sneakers on his feet, it comes as no shock that Kummerow exercises for an hour daily on a stationary bike.

Kummerow works on papers every day and watches journalist Bill Moyer on public television in his free time to learn even more. He continues to work on new projects that he cannot disclose as of yet. Kummerow stayed at the University because he considers universities to be “cathedrals of learning.” The old cathedrals in Prague and Munich amaze Kummerow because they were built before Europe was industrialized and builders had to “learn how to think,” he said.

“What is the reason for you to come to a university in the first place? To learn how to think,” Kummerow explained.

Kummerow said learning to think in college makes you a different person compared to somebody who just went to high school. Students should remember that it is the learning process that’s important, he said.

He said that students can focus on anything they want in the future, but suggests they research Parkinson’s disease.

“That’s what my wife died of last year. We were married 70 years, she was a wonderful person,” he said.

In the meantime, Kummerow will enjoy his egg and glass of whole milk each morning in preparation for his full day. The slate plaque sits in his breakfast nook. “I am still learning.”

Michelangelo would be proud.