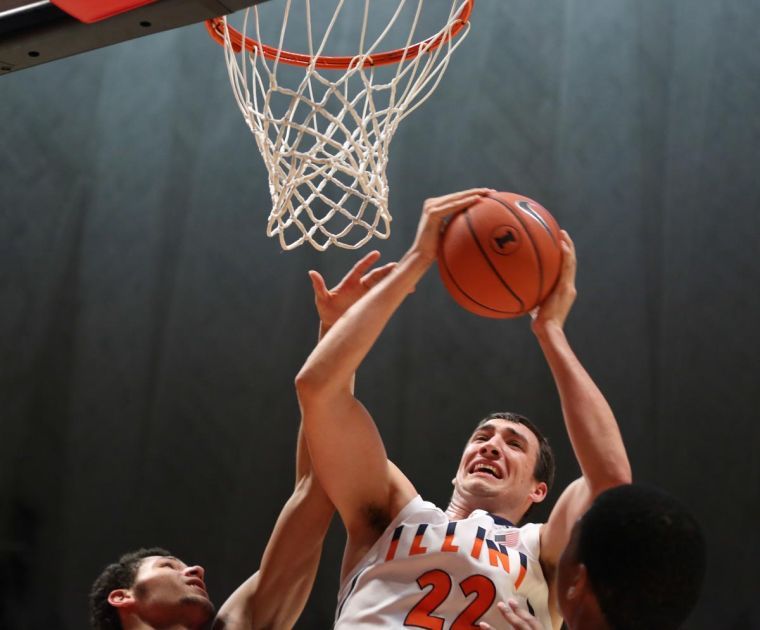 Illinois' Maverick Morgan (22) pulls down an offensive rebound during the game against Bradley at State Farm Center on Sunday, Nov. 18, 2013. The Illini won 81-55.

Illinois basketball head coach John Groce can’t control whether shots go in. He knows that some days shots fall and some days they don’t. But he also knows two things that his team can control — defense and rebounding — and if they control those areas, the team will have success regardless of whether its shots go in.

Groce’s team has been a top-25 unit in both of those areas this season, a large reason for the team’s 7-1 start. Defensively, the Illini rank 15th of the nation’s 351 Division-I basketball programs in Ken Pomeroy’s adjusted defense ranking and, on the boards, Illinois ranks 30th in overall rebounding and 21st in offensive rebounding.

Rebounding has been a team effort for the Illini. Four of Illinois’ starters average around six rebounds per game, with point guard Tracy Abrams adding 3.9 per game.

Senior forward Jon Ekey leads the team with 6.6 rebounds per game. Though Ekey, at 6-foot-7, is shorter than many forwards, he has been able to out-rebound many taller forwards using his athleticism. He said this year’s team shows there is more to rebounding than height.

“(We have success) using our athleticism and just trying to catch people off guard,” Ekey said. “Maybe people didn’t think we didn’t exactly have size. I mean, we’re tall, but maybe we’re not as big as some people thought, so we catch them a little off guard with (our athleticism).”

Groce said he could tell this was a special offensive rebounding unit before the season started.

“I’m not surprised,” he said. “I kinda saw it this summer when I looked at the personnel and which guys have natural gifts in that area. I thought we could be very good on the glass, but the key honestly is consistently going and doing that all the time. It takes great effort and discipline to be a good offensive rebounder.”

Stricter rules about calling fouls and Illinois’ lack of 3-point shooters has resulted in many teams playing zone defenses against the Illini, which Ekey said are much easier to get offensive rebounds against.

Illinois’ success has clearly been tied to its ability to rebound. Illinois started the season 5-0, out-rebounding opponents in four of the games, with an average margin of victory of 16.6 points. In their last three games, Illinois has been struggling on the boards, getting out-rebounded in all three; not coincidentally, the games have been the closest of the season for the Illini — two two-point victories and a three-point loss.

Despite ranking 15th in the nation in defense, the Illini rank No. 153 in adjusted offensive efficiency, an estimation of how many points per 100 possessions against the average D-I defense. Although the team has struggled to be efficient, the offensive rebounding has helped the Illini have success early on.

“It’s an extra possession,” senior Joseph Bertrand, who averages 2.5 offensive per game said. “The second shot is way more likely to go in than the first shot.”

Rayvonte Rice said the team could surprise some people if it continues its rebounding ways.

“If we keep offensive rebounding, it’s going to be a good turnout,” Rice s aid.