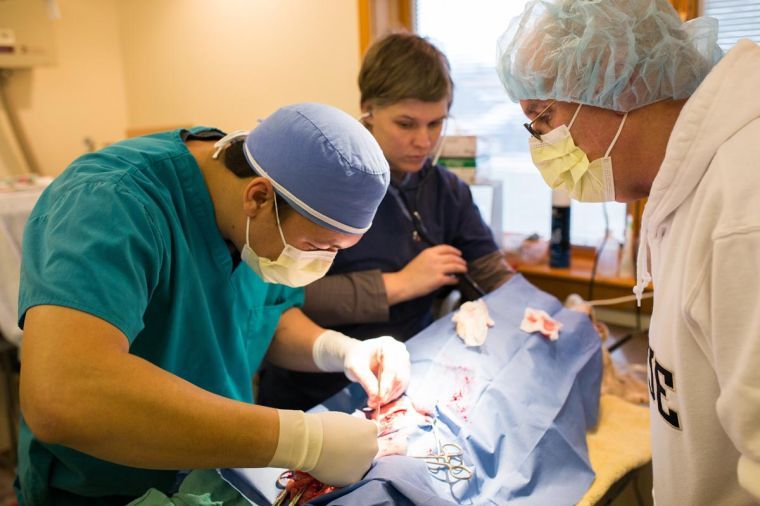 Dr. Robert Weeden (right) watches over Jason Lyn and Annie Strong as they spay a dog at the Champaign County Humane Society.

Robert Weedon does not need an alarm clock to wake up in the morning — his passion for his job is what gets him out of bed.

“Yesterday morning I woke up at 4 o’clock. I was wide awake and was excited to start the day,” he said. “This morning I slept in; I didn’t get up until 5:30.”

Weedon is a clinical assistant professor of shelter medicine at the College of Veterinary Medicine and a shelter veterinarian at the Champaign County Humane Society. He has a half-time appointment at the CCHS and half-time appointment with the University to expand the shelter medicine program. Weedon has practiced veterinary medicine for 28 years, been involved in public health organizations and taught pre-veterinary students throughout the country.

Weedon’s former colleague Jean McNeil described him as a “jack of all trades.”

“He’s one of those who never has a dull moment,” McNeil said.

On Oct. 23, the College of Veterinary Medicine received a $323,000 grant from PetSmart Charities, the largest grant the shelter medicine program has ever received. The grant will pay for supplies and fund an intern veterinarian, a veterinary technician and a mobile sterilization trailer. Weedon and Brenda Betts, associate dean for advancement in the College of Veterinary Medicine, were the primary people who worked on applying for the grant, a process that took almost a year.

Betts said Weedon is passionate about the shelter medicine program, and it was great working with him on the grant. It was wonderful when they received word that the grant had been approved, she said.

“We’re so pleased that PetSmart Charities has partnered with us. It’s such a great opportunity, and we’re so grateful for it,” Betts said.

Weedon said the grant is beneficial for both the students and C-U community.

“Students are getting more training, which benefits the animals in the community. It’s a win-win situation,” he said.

As well as overseeing the shelter medicine program, Weedon is a faculty adviser for the University’s shelter medicine club, the Illinois Student Chapter of the Association of Shelter Veterinarians.

Weedon and Amy Fischer, teaching associate in the animal sciences department and faculty adviser for the club, helped form ISCASV in fall 2011.

“It’s like the stars aligned,” Fischer said. “We had these great vet students who really had leadership abilities to bring people together, and then Bob came in. The club has done so much.”

The student organization, which has about 150 members, supports the shelter medicine program and gives members experiential training in the area of shelter medicine. Weedon said the group organizes weekend sterilization clinics for shelters and low-income members of the community.

Weedon’s demonstrated passion for veterinary medicine can be traced back to his years growing up in Carmel, Ind., a small town just outside of Indianapolis. He recalled how his family lived near a stable, where they kept their horses.

“I’ve always believed that kids that grow up with responsibilities for animals ultimately have a better appreciation for human life,” he said. “Now I’ve got four cats and two dogs, and my life kind of revolves around them.”

Weedon also taught at the University of North Carolina at Wilmington for 12 years. He said teaching gave him a different kind of satisfaction than saving a sick puppy or fixing a broken leg.

“Certainly those make you feel good. But seeing students get it, and seeing them grow and flourish, is what really gives me a lot of personal satisfaction,” he said.

In 2001, she invited Weedon to participate as a community partner in the Management Academy for Public Health, a yearlong pilot program with the goal of training middle-level public health managers.

“He immediately said yes. Of course, I had no idea how much it would turn into something as big as it was,” McNeil said.

Consisting of Weedon and four people from the health department, the program developed a business plan on how to develop, design and build an on-site spay/neuter facility.

They accomplished their goal. The team created the facility and an adoption play area, and Weedon completed the first sterilization at the facility in September 2004.

The program changed Weedon’s way of thinking and course in life.

“During the year, I gained an appreciation for the importance of public health and had so much fun and learned so much that I decided to do a masters,” he said.

In 2002, Weedon finished his master’s degree in public health at the University of North Carolina at Chapel Hill. Afterward, he continued his private practice and started teaching epidemiology in UNCW’s biology department for pre-professional students.

Katherine Hughes, a doctor of veterinary medicine and UNCW graduate, met Weedon during the summer of 2006 through her internship at the local hospital. In the fall, she joined UNCW’s pre-vet club, of which Weedon was the adviser.

“He really opened my eyes as to what the multitude of opportunities that I would have with a DVM degree,” Hughes said.

Weedon retired from private practice in 2009 to work for Global Alliance for Rabies Control as the veterinary outreach coordinator.

His first speaking engagement for the organization was in October 2008, before he worked there, at Tuskegee University for their inaugural Merial Rabies Symposium. The occasion changed Weedon’s perspective on his role as a veterinarian and educator.

On the morning of the event, he went for a run on campus and came across the Tuskegee University Campus Cemetery.

When Weedon stepped inside the cemetery, he realized he was standing in between two great people in history — George Washington Carver and Booker T. Washington.

“Carver’s grave didn’t have so much a headstone, more of a concrete sarcophagus, but the inscription on it, it changed me forever,” Weedon said.

Part of the inscription read, “He could have added fortune to fame. But caring for neither he found happiness and honor in being helpful to the world.”

“And I read that and I realized that my life wasn’t about making money … My life was really about making the world a better place and ultimately, the students that I trained hopefully will continue to do that,” Weedon said. “That was an epiphany.”

In 2011, Weedon moved to Illinois from North Carolina to become Champaign County Humane Society’s shelter veterinarian, through which he mentors fourth-year veterinary students in their shelter medicine rotation.

Regarding his job as an educator, Weedon said he cannot think of anything else he would rather be doing.

He follows the philosophy of Erwin “Erv” Small, a late associate dean from the UI College of Veterinary Medicine, who once visited Weedon’s class at Purdue in fall 1977.

“He said you don’t want to spend the next 30 years getting up every morning saying, ‘Oh God, I’ve got to go to work,’” Weedon said. “And I’ve always remembered that.”

Alison can be reached at [email protected]