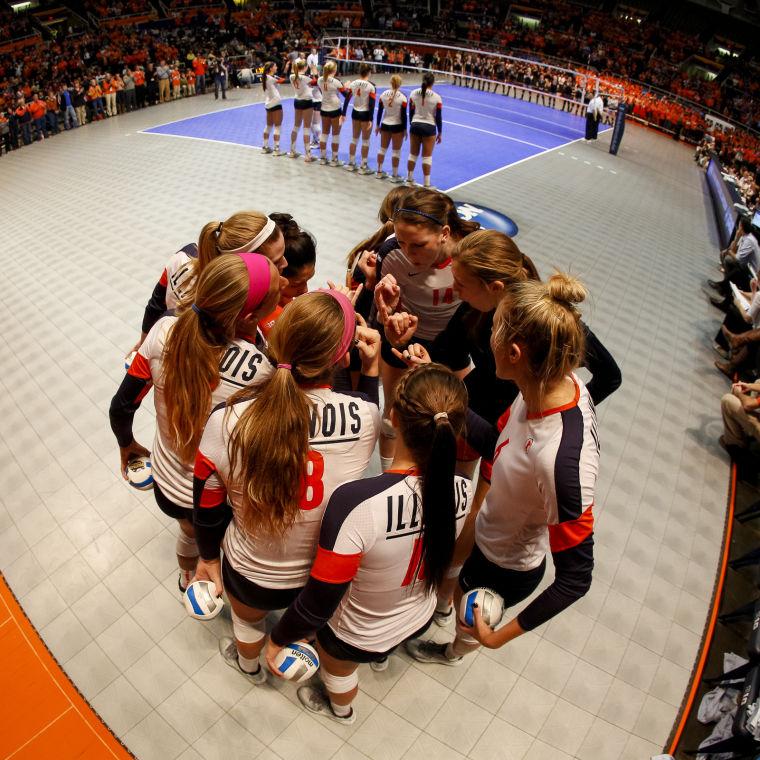 Illinois huddles together before an NCAA regional semifinal match against Purdue at State Farm Center on Friday, December. 13, 2013. The Illini lost, 3-0.

Everyone knows the ins and outs of football and men’s basketball, but Illinois is home to scores of talented athletes that deserve a little more credit.

2 | Comeback player of the year

Jannelle Flaws was named Big Ten Forward of the Year after a knee injury sidelined her for the entire 2012 season. The Illinois soccer team made it to the Sweet 16.

3 | Late surge into the tourney

Volleyball won six matches in a row to climb back into the rankings when it mattered at the end of the season, beating No. 17 Michigan, No. 13 Michigan State and No. 18 Purdue along the way.

When wrestling traveled to New York for the Journeyman Duals in November, reigning national champion Jesse Delgado defeated No. 2 Nahshon Garrett and was named Outstanding Wrestler of the meet.

Even with the flu, Melissa Kopinski and the team went 5-1 at the first home tennis tournament of the year, leading the Illini to the best overall record at the tournament.

Freshman golfer Stephanie Miller was named Big Ten Golfer of the Week in mid-October after becoming the first University freshman to win a tournament outright since 1992.

Illinois women’s basketball came from 20 points down to beat Seton Hall on Dec. 9, for one of the biggest comebacks in program history.

Cross-country runner Jannis Toepfer qualified for the NCAA Championships after finishing third at NCAA Regionals, the highest finish for an Illini since 2007.

By beating Morehead State and No. 22 Marquette handily, volleyball returned to the Sweet 16 after being shut out of the NCAA tournament in 2012.

Paralympian Tatyana McFadden became the first person to win four major marathons in one year, making her one of Illinois’ biggest success stories in recent years.

Aryn is a senior in LAS. She can be reached at [email protected]. Follow her on Twitter @ArynBraun.