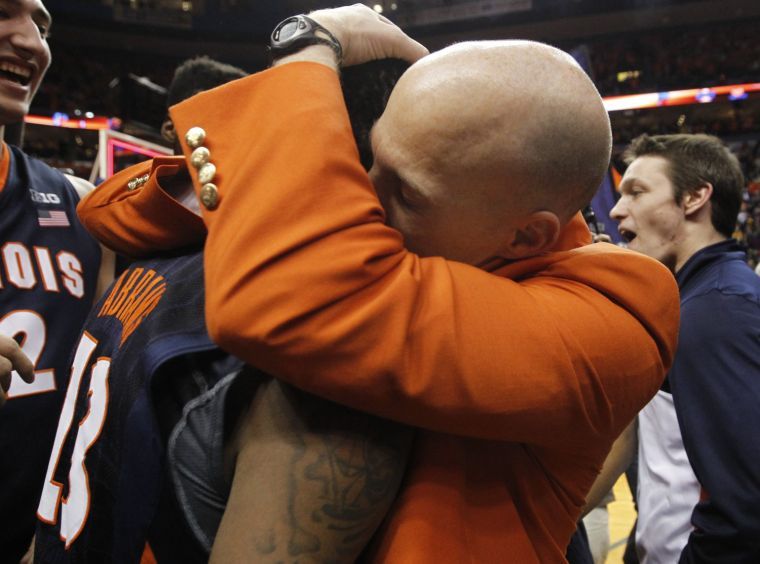 Illinois’ Tracy Abrams gets a hug from head coach John Groce after a 65-64 win against Missouri in the Braggin’ Rights game at the Scottrade Center in St. Louis on Saturday, Dec. 21, 2013.

After a couple stellar performances against UNLV and IPFW over Thanksgiving break I called Rayvonte Rice the “go-to player” of the Illinois men’s basketball team. Maybe I spoke too soon.

Tracy Abrams took the role as the primary scorer of the Illini down the stretch in a 65-64 win over No. 23 Missouri on Saturday. The win snapped a four-game losing streak in the Braggin’ Rights game for the Illini. Illinois can thank Abrams for squeezing out the win in this wire-to-wire close game.

Abrams’ biggest shot may have not even come in the waning minutes of the game. The Illini trailed 53-46 after Jordan Clarkson scored an acrobatic lay-in with a shade over nine minutes remaining in the game. Illinois could’ve crumbled trying to withstand Missouri’s run. Instead Abrams responded with an and-one lay-up to bring the Illini within four.

Abrams scored 12 of Illinois’ last 19 points in the contest. He just wanted this game more than anyone else on the floor. He wasn’t looking to pass or let other players step up; he took it upon himself to take over.

Abrams wasn’t the only Illinois player to step up.

Jon Ekey hit what at the time looked like Illinois’ biggest shot of the game on a go-ahead 3-pointer with 50 seconds left. Ekey got a clean look after Joseph Bertrand came up with a loose ball following an Abrams miss. Missouri’s Jabari Brown would hit a 3-pointer of his own to give the Tigers a one-point lead with 16 seconds remaining.

Kendrick Nunn tried to help Rice contain Clarkson, who led Missouri with 25 points, but the freshman ended up leaving the Tiger’s best shooter wide-open in the corner. Brown made him pay. Fortunately for the Illini Abrams wasn’t done yet.

Rice, Illinois’ go-to player in the early going of the season, started the crucial possession with the ball in his hands. After nearly losing the ball out of bounds, Rice gave up the ball to Nnanna Egwu, who quickly passed it to Abrams. Abrams had to make his move with the clock winding down. The point guard busted out a nifty spin move, forcing Johnathan Williams III to hack him. His two free-throws with 4.6 seconds left propelled the Illini to its first victory in the series since 2008.

Abrams finished with 22 points and six rebounds in what was arguably the best performance of his career given the stage. Rice was Illinois’ second highest scorer with 14 points, but he struggled for much of the night, shooting five-of-13 from the field and three-of-six from the free-throw stripe.

The junior guard entered the game shooting just 35.7 percent from the floor, 23.7 percent from three, while sporting only the fourth best player efficiency on the team at 16.7. That doesn’t cut it for one of the most experienced players on the team.

Rice has scored at least 12 points in every game this season. Even though he’s been a model of consistency, Illinois can’t rely on him every game. If Abrams can do what he did against Missouri and take some pressure off Rice, Illinois can compete with the top-tier Big Ten teams this season.

Illinois needs Abrams to put them over the top. He did just that on Saturday.

Michael is a senior in Media. He can be reached at [email protected]. Follow him on Twitter @The_MDubb