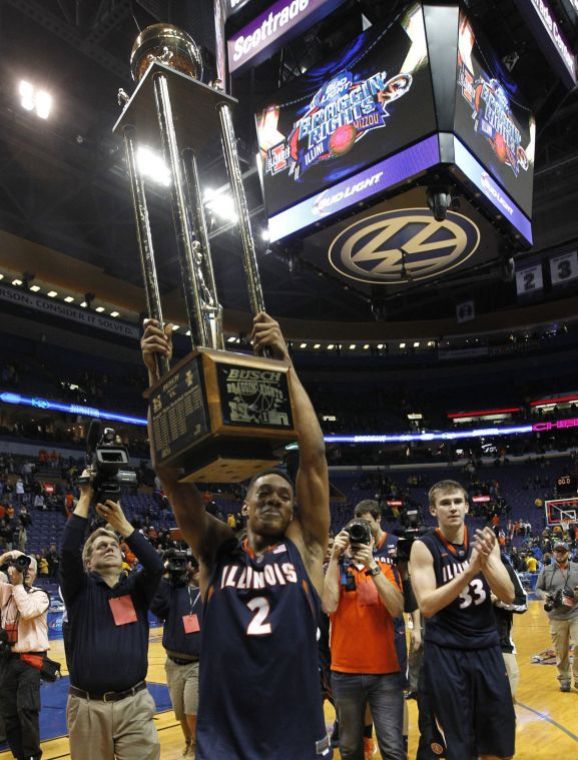 Illinois’ Joseph Bertrand celebrates a 65-64 win against Missouri in the Braggin’ Rights game at the Scottrade Center in St. Louis on Saturday, Dec. 21, 2013.

ST. LOUIS — After Joseph Bertrand carried the Braggin’ Rights trophy off the court for the first time in his five-year Illini career, he couldn’t help but do a bit of bragging.

Bertrand wasn’t the only current Illini with the former players on his mind following the 65-64 thriller win over Mizzou.

Point guard Tracy Abrams hit two go-ahead free throws with 4.6 seconds remaining, and after Mizzou wasn’t able to score, his first thoughts weren’t of elation or celebration; instead, they went to his former teammates.

“We’re excited about the win. We’re gonna celebrate. But I was just thinking about our former guys and how those guys never got one,” Abrams said.

Like Abrams, Illinois head coach John Groce didn’t immediately think of the impact the win will have on this year’s squad.

“I couldn’t help but think of the five seniors from last year,” Groce said. “I’ve said before I feel indebted to those guys last year, those five seniors. They wanted to win the game just as badly as our guys did tonight.

“To get a chance to win the game we did it a little bit for those guys as well as the guys who are on the team this year.”

The seniors had close games in their four years at the program, including a 78-74 loss two years ago, but they were never able to pull out the win.

Groce said the annual rivalry game has the feeling of  “a heavyweight boxing match.” And he knows how much it means to fans, players and the program.

On Twitter, D.J. Richardson congratulated Bertrand, saying “hahaha” and “proud of you bro.”

Paul, who plays professionally in Russia, replied to the taunting in kind: “lol that’s how you feel? I’m too happy for y’all man..I went crazy, but since u want to be cute, have fun going back to class.”

Saturday’s win marked No. 1,700 in Illini history, making Illinois the 13th program to reach the milestone. Groce wore an orange sport coat in the game. He said anytime he wears the coat, he is honoring former Illinois head coach Lou Henson, who accounted for 423 of Illinois’ wins, the most of any coach.