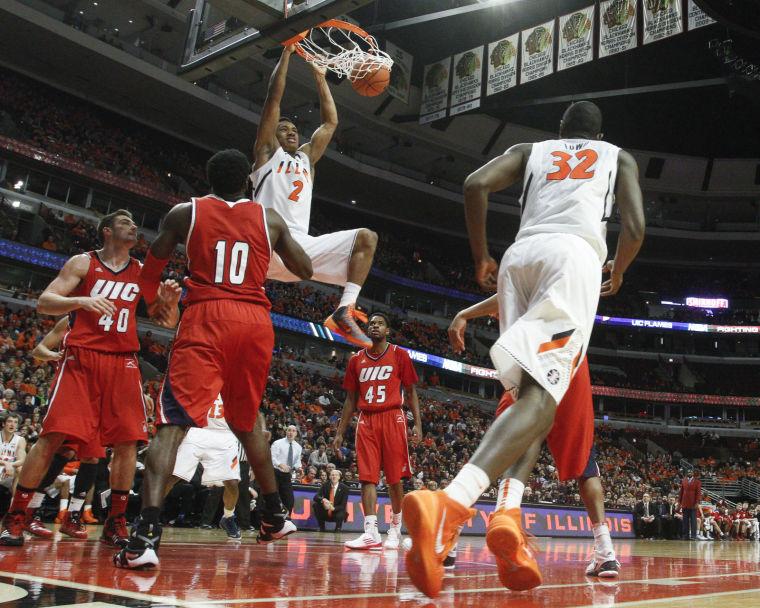 Illinois’ Joseph Bertrand (2) dunks the ball during the game against Illinois-Chicago at the United Center on Saturday, Dec. 28, 2013. The Illini won, 74-60.

CHICAGO — As the Illinois men’s basketball team sat in the locker room at halftime of Saturday’s game against UIC trailing 44-34, senior Joseph Bertrand told his teammates that the Flames, despite being a 5-8 Horizon League squad, weren’t going to make it easy for the Illini.

He recalled his freshman year, when UIC rallied from an eight-point second-half deficit to beat the Illini.

Early Saturday, everything went right for Illinois-Chicago and Bertrand felt a familiar feeling sinking in. UIC was able to build a double-digit halftime lead by shooting 62 percent from the field and 58.3 percent on 3-pointers. Senior guard Kelsey Barlow, who transferred from Purdue this season, was leading the way for the Flames with 18 points on 7-for-12 shooting, including 3-for-5 on 3-pointers.

Bertrand didn’t want a repeat of three years ago, and he reminded his teammates they needed to play hard in the second half.

Rice had been the lone bright spot for the Illini in the first half, scoring 12 points on 5-for-7 shooting, but he changed the game in the first minute of the second half.

Rice drove to the basket, missed a lay-up grabbed his own rebound and made the shot to start the half. On the other end, senior Jon Ekey got a steal, passed it to Rice who found junior Tracy Abrams open in transition for a 3-pointer. Barlow took the ball to the other end of the court, where Rice grabbed a steal and passed it up to Joseph Bertrand, who hit a lay-up and made the score 44-42.

Two points, two assists, one rebound and one steal by Rice in the first minute put Illinois back in it.

But Rice wasn’t done. He totaled 16 points in the second half, making it a season-high 28 points, on the way to a 74-60 Illini win at the United Center. He also took over defensive duties on Barlow in the second half, holding him to only three points on seven shots.

“He was going off in the first half,” Rice said of Barlow. “It was just a mentality — being tough on the ball, trying to deny him, doing everything you can to prevent him from scoring.”

“What stands out about Ray’s second-half performance is he was guarding their guy,” Groce said. “It was one of his more complete performances of the year.”

The rest of the team mimicked Rice’s defense — Illinois held UIC to 16 points after allowing 44 in the first half. The Illini outrebounded the Flames 24-14 after losing the rebound battle 19-8 in the first half. Illinois forced eight turnovers in the final 20 minutes to finish with 13 for the game.

“Guys in our locker room have a lot of pride,” Groce said. “They had a much tougher disposition in the second half.”

Illinois was less efficient offensively, but more productive. Illinois’ shooting percentage fell from 48 percent to 42 percent but 10 offensive rebounds made up for it.

In addition to Rice’s 28, Abrams finished with 16 points while Bertrand added 14, including 10 in the second half. The three top scorers accounted for 58 of Illinois’ 74 points.

“It wasn’t good to get down like that,” Bertrand said. “Every team makes runs. Their run happened to be when the ball was tipped.

“They really came out. We stay poised and came out with the win.”

The game was Illinois’ final nonconference game before opening Big Ten play against Indiana on Tuesday. Groce said the tough game was good for his team heading into conference play.

“You have to have that fight with Season Two beginning on Tuesday,” he said.