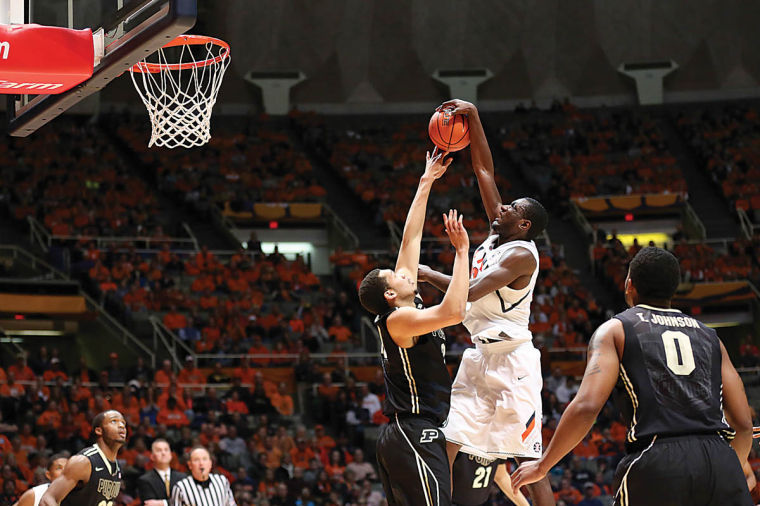 Illinois’ Nnanna Egwu is blocked by Purdue’s A.J Hammons during the game against Purdue at State Farm Center on Wednesday. The Illini lost 66-58 extending their losing streak to three games.

Illinois head coach John Groce said it wasn’t difficult to figure out why the Illini lost to Purdue 66-58 Wednesday night.

“(All season long,) we’ve defended, we’ve rebounded, we’ve taken care of the ball,” Groce said. “Those are the three things we’ve been hanging our hat on, and we didn’t do any of them well, especially in the second half.”

After outrebounding Purdue 21-19 in the first half, Illinois grabbed just seven boards in the second half to Purdue’s 23.

“It’s unacceptable,” Groce said. “They were tougher than us physically, and they threw us around like a bunch of rag dolls.”

Purdue head coach Matt Painter said that Illinois has rebounded well all season, and his team was able to win because of its aggressiveness on the boards.

“It was the difference in the game,” Painter said.

“As a leader, I just kinda put that on my shoulders. I’ve definitely got to do a better job of that,” Abrams said.

Illinois center Nnanna Egwu was held scoreless for the first time this season, and he struggled to grab rebounds and defend Purdue center A.J. Hammons, who finished with 17 points and eight rebounds. Egwu was 0-for-7 on the night and has missed 11 straight 3-pointers, but Groce said his big man needs to keep shooting.

“I’m more concerned about the lack of physical aggressiveness,” Groce said of Egwu.

Illinois’ leading rebounder was a hobbled Rayvonte Rice. Illinois’ leading scorer was a game-time decision and played to form in the first half, finishing with 10 points and four rebounds, but couldn’t get going in the second half, making just one free throw. He finished with 11 points and seven rebounds on 3-for-9 shooting.

One of the few bright spots for the Illini was the play of freshmen Kendrick Nunn and Malcolm Hill, who had one of their best games of the season. Hill finished with seven points and five rebounds, though all of his production came in the first half. Nunn had eight points and shot 2-for-3 from deep.

“They had a swagger about them that I liked,” Groce said. “I love the progress that those two guys are making.”

Nunn said he’s noticed that the competition has gotten much tougher in Big Ten play, but he has played because of his defense.

Abrams said it’s tough to be on a three-game losing streak, and the team just needs to do what it’s done and stay positive to break the streak.