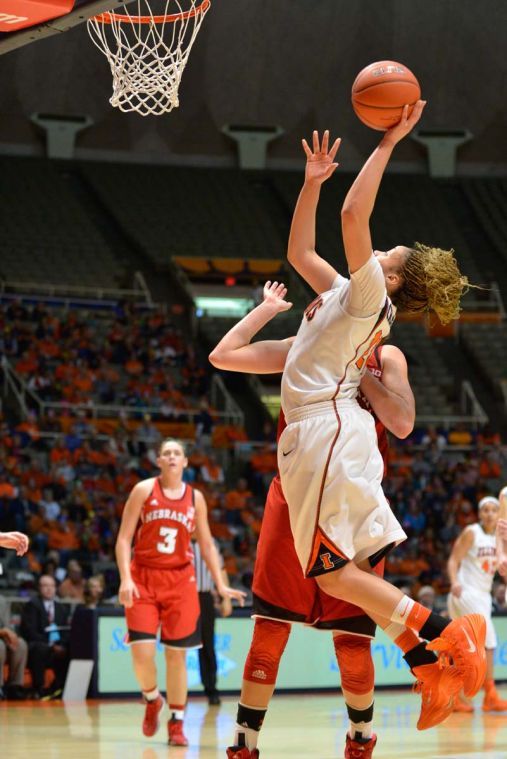 The new year has not been kind to the Illinois women’s basketball team.

The Illini (8-9, 1-3 Big Ten) struggled to get their first win in 2014 and have been unable to duplicate last season’s success of an NIT berth in head coach Matt Bollant’s first season. Despite a solid 6-3 record at State Farm Center, Illinois has struggled on neutral courts and on the road — posting a combined 2-6 mark in such venues. Illinois is 1-3 in conference play after a win Wednesday at Northwestern. Seven of the team’s final 12 games are on the road.

The Illini missed two opportunities to break through in the win column earlier in January. In the conference opener against Wisconsin, Illinois blew a five-point lead with 3:22 remaining and dropped the contest in overtime, 76-64. Despite 30 Badgers turnovers, Illinois couldn’t hold the lead late in the game and couldn’t stop Wisconsin in the extra period, as the Badgers were a perfect 5-for-5 from the field. Ivory Crawford led the team with 20 points to go with seven rebounds.

“We had a sluggish start (to the overtime period),” head coach Matt Bollant said after the game in a press release. “Offensively, it looked like a lot of the kids didn’t want to take shots and that was disappointing. You got to have that self-belief to give me the ball and we lacked a little bit of aggressiveness in overtime that we had for most of the night.”

Less than a week later, it was Illinois who was making a frantic comeback at the end of the game, only to fall short against Penn State, 82-76. Trailing by 18 with 3:06 left in the game, the Illini went on a 15-1 run to get within four, but the Lady Lions made free throws in the final minute to secure the victory. Crawford had another big game for Illinois, with 25 points and seven assists.

The Illini lost to No. 16 Nebraska by 19 at home, and now face three consecutive conference games on the road.

Illinois got its feet under it with a 76-74 win in Evanston, Ill., against Northwestern. Crawford led the way with 19 points and three rebounds.

Crawford has been a bright spot in spite of Illinois’ slump. She has scored 19 points or more in the past five contests, upping her season average to 15.2 points per game.

With nine losses already, Illinois’ postseason dreams are in jeopardy. The Illini were 19-14 last season — good for a berth in the WNIT — but this season’s Illinois squad has dug itself into a hole early in January. The team’s RPI sits at 171, lowest in the Big Ten by 87 spots, and the Illini haven’t gotten consistent play as a team on the defensive end to make a tournament push.

Illinois ranked 250th of 343 Division I teams in scoring defense headed into Wednesday’s contest, having allowed 71.4 points per game, even with stellar performances against overmatched Alcorn State and Southern Illinois teams who scored 28 and 43 points against the Illini respectively.

“When we get punched in the mouth, we don’t always respond the right way,” Bollant said in a release after an 82-60 loss to No. 19 Georgia on Dec. 28. “That’s something that we have to figure out as a program: how are we going to respond when things don’t go our way?”