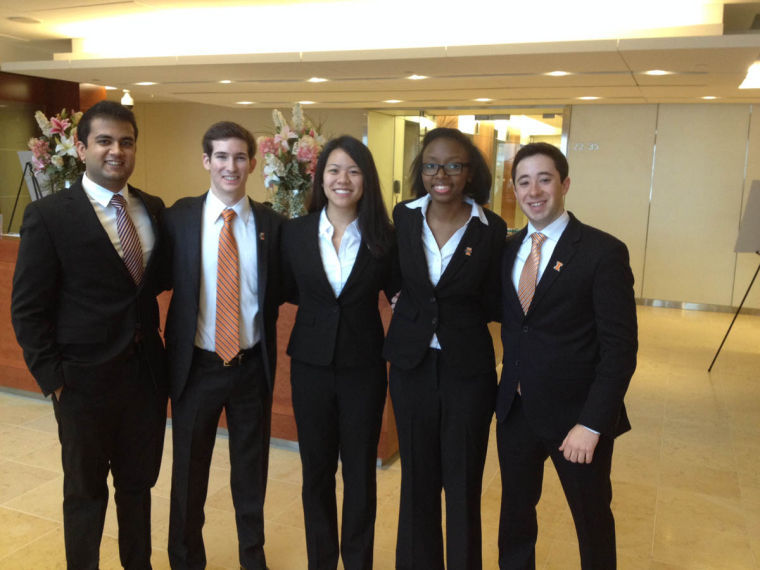 The theme was “One company, one world, one future.” But it was one relentless commitment to the PricewaterhouseCoopers LLP case competition that allowed a group of students from the University to reach the national level.

Though nationals took place over a course of two days, the journey to get there began weeks before, when the students entered the contest against 29 other teams from the University in mid-October.

Anthony Fontana, associate director of Admissions and Enrichment Academy in the College of Business, and Brooke Elliott, associate professor of accounting, were advisers for the competition. They worked on recruiting students and aiding them throughout the process. Once the case was given out, the teams had two weeks to create a 12-minute presentation for a panel of judges.

As soon as Liu and her teammates knew about the case, they weighed each other’s strengths and weaknesses, assessed solutions and structured the analysis along with its creative aspects.

“We had practiced so much and invested so much time into this, there really wasn’t much time for nerves,” said Wolken, junior in Business. “At the U of I round especially, we spent countless hours perfecting the 12-minute speech that I could say I was more nervous for the Q-and-A.”

Leading up to the first round, Wolken and his four teammates practiced for at least two hours every day, and about six to seven on the last two days before the presentation. On the evening of Nov. 4, the team won the University round. Shortly after, they entered an intense video contest against University of California, Berkeley and University of Cincinnati to secure a spot at the national round.

The students were told to film a one-minute video explaining why they deserved to go to New York City. From there, they worked against the clock to get as many votes on Facebook as possible by Dec. 1. Since most of the voting took place over Thanksgiving break, the team reached out to the campus community to vote once a day, as this was the maximum amount allowed per day by PwC.

“The last two hours of voting on that night were easily the most intense hours of work I’ve ever had, and maybe in life,” Fontana said.

On Dec. 2, Team Innovate discovered that they won with more than 11,000 votes, exceeding University of California, Berkeley’s vote total by less than 10 votes.

“Once they found out that they won, they really began to focus on making this the best presentation it can be,” Fontana said. “The maturity and the professionalism continued to increase every time we hit a new milestone.”

Fontana said that even during final exams, the team was “still focused on not leaving any stone unturned for the national competition.”

Before presenting at nationals, PwC connected the team to more associates and members from the firm to review their presentation and answer any questions they had.

For Liu, the opportunity to work with professionals from PwC was especially exciting because of an internship she will begin with the firm in their Chicago office in the summer.

“This firm is so dedicated to all of its people,” Liu said. “Even though not all of us were employees of the firm, they were so willing to spend so much time and energy. It was really surprising in a good way.”

Tim Reierson and Robin Miller, firm relationship partners from PwC, acted as coaches, mentors, advocates and sounding boards for Team Innovate throughout December and early January to prepare them for the national round.

“I wanted the students to always feel that we believed in them and that no matter the outcome, we were going to be proud of them,” Rierson said.

Once the team arrived in New York City, they received T-shirts, jackets and other giveaways, and the company took them out to dinner and to see “Wicked” on Broadway. The next day, they were given some time to prepare in a boardroom, and then they presented for the judges. Each member was the expert on a certain aspect of the case, and Bosworth opened and closed the presentation.

“Our presentation at nationals was probably the best presentation we’d given, and we really left no regrets in New York,” Wolken said.

While the University allows students to pick their teammates, many of the teams who attend nationals are assigned based on intellect and ability. Both Fontana and Wolken agreed that having the opportunity to pick teammates enabled a genuine chemistry for the team.

“It’s going to sound cheesy, but over the process, you think you have a 12-minute presentation and each person is going to take their part and then be done,” Wolken said. “But you forget how important it is for the four other members of the team to not only know what you’re presenting on, but understand what’s going into it. If someone was struggling during the Q-and-A, any one of us could’ve stepped in and answered because we all knew our parts so well.”

Though the team did not win first place, they were the first group to compete at the national level from the University since 2010.

“The success of this year’s competition is largely measured by how much the team has developed and grown, personally and professionally,” Miller said. “I truly believe coming out of this, they have the confidence to know that they can do whatever they want.”