Commission votes to cut down tallest tree in Urbana 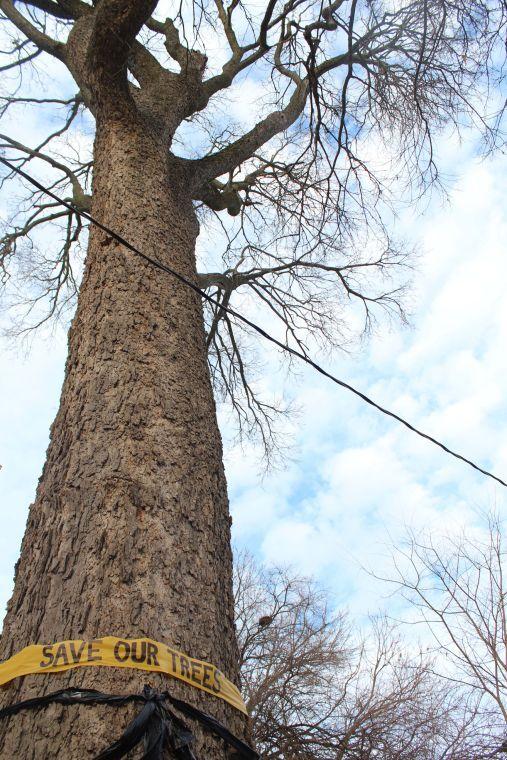 The Urbana Tree Commission unanimously voted to cut down Urbana’s oldest tree while saving as much of the trunk as possible. Citizens gathered at the meeting to suggest possible uses for the trunk, including using the trunk as a cross section to highlight moments in Urbana history.

Bare branches sway in the breeze similarly to brimming ones, yet rarely receive as much attention from those passing by. However, on Jan. 6, when a white dot appeared on the 312 Coler St. hackberry tree in Urbana, citizens wasted no time spreading the news about the tree’s newest physical addition. The small white circle signified the tree’s imminent removal within the next five days.

The 14-story tall tree towers above its neighboring trees. The thick trunk is a sturdy landmark for those who live in the nearby neighborhoods.

The 7-year-old found the white dot while on a walk with his father and younger brother. As he addressed the Urbana Tree Commission, his young voice drew a sharp contrast to the ancient tree in question and highlighted the varying walks of life this one tree has been a part of.

However, this tree was different than most marked for removal — it was given a chance. Urbana citizens and admirers of this tree decided to rally together and see if they could save it, choosing to utilize Urbana’s Legacy Tree ordinance for the first time. The ordinance is a new way to preserve old trees as well as give candidates special recognition, said Mike Brunk, Urbana city arborist.

An emergency meeting of the Urbana Tree Commission was scheduled for Jan. 16 to listen to citizens’ suggestions and complaints as well as decide fate of the hackberry tree.

Wald explained that he and his father “discovered it was the oldest tree in Urbana by doing very accurate measures,” showing one of the many educational values of this tree.

Alderman Dennis Roberts, Ward 5, gave a brief history of the tree. It is speculated to have started its life on the banks of a tributary of the Boneyard Creek. In 1850, Judge Joseph W. Sim served as judge at the Urbana courthouse and owned the property the tree is now found on.

“Because of the estimated age and size of the tree, we think the tree was probably a small or medium-sized tree at the time Abe Lincoln was practicing law in Urbana,” Roberts said. “It is really likely that Abraham Lincoln visited the judge and was on the property.”

Brunk said he has hugged this tree all the way up and down during his safety inspections and even considers this tree his friend.

But he said the tree is an “imminent hazard” and must come down as soon as possible.

“This tree has seen its natural life,” Brunk said.

He showed a picture of the tree with eight spots circled explaining the different structural problems of the tree. He explained the tree is visibly rotting about 40 feet above the ground and entire large limbs are hollow. The rot has progressed so far that there is no longer any live wood at a section that holds much tension, he said. Therefore, because of its poor condition, the tree does not meet the requirements of becoming a legacy tree, which includes, among other factors, being in good condition.

After the arborist spoke, the atmosphere changed in city hall.

Not only was the tree not going to be the first legacy tree in Urbana, the meeting would conclude with a unanimous vote to cut the tree down.

Instead of advocating for keeping the tree completely intact, audience members began brainstorming the best ways to memorialize it for future and current citizens of Urbana.

Many diverse suggestions were made regarding the best way to save the tree. The commission is considering a cloning project with the intention of planting the replica in the same spot on Coler Street. There is also hope the tree will spread its seeds on the neighboring grounds and the tree’s genes will live on.

At the meeting, Urbana citizen Ilona Matkovszki spoke about the importance of the hackberry tree’s beauty and how much it adds to the neighborhood.

“I love this tree — it was one of the first things I noticed when I came to the city 20 years ago, and I have loved it ever since,” she said.

She compared the tree to a column in ancient Athens and Rome, adding that the great buildings that once stood there have fallen but some parts still remain. This tree trunk is the best ancient column citizens have in Urbana, and it must be remembered, she said.

Matkovszki also supported a plan to annotate a map of Urbana with the locations of important trees for people to visit.

Citizens also suggested replacing the tree with a cross section of it, marking important events in Urbana’s history on the rings.

Though the commission unanimously voted to cut down the tree, they plan to save as much of the trunk as possible.

Jeffrey Dawson, chair of the tree commission, addressed the crowd after the vote and said he was “amazed and pleased by all of your support and interest,” but went on to add that “the tree has been on life-support for almost 20 years.”

The tree commission discussed the possibility of the hackberry tree becoming the first the first honorary legacy tree, but it is still up for discussion.