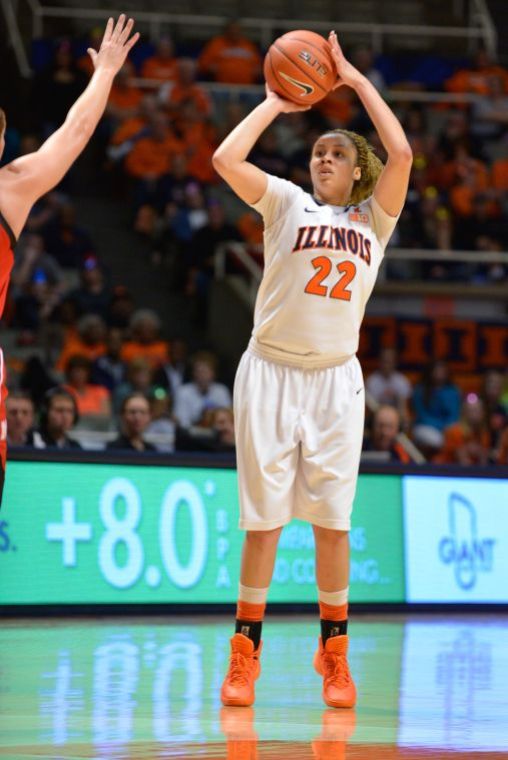 Illinois’ Ivory Crawford shoots from the 3-point line during a game against Nebraska at State Farm Center on Jan. 12. The Illini lost 75-56.

There haven’t been many bright spots during the Illinois women’s basketball’s first five games of the conference schedule, other than the play of guard Ivory Crawford.

The junior has been on an offensive tear in January, averaging 20.3 points per game for the month. Crawford has led the team in scoring in every contest in the new year, consistently scoring 19 points or more in each game. She has shot 48.1 percent from the field and 30.0 percent from three during that stretch.

“Ivory’s game has gone to a whole other level,” junior guard Alexis Smith said. “I love playing with her. She’s got a take-on mentality and she’s a fighter and she’s going to get it done, and that’s what she’s been showing.”

Crawford said that she has mostly been working on her defense in lieu of her offense as of late, as defense is the team’s philosophy. She said other than her defense, she has practiced her 3-point shot and has been helping guide younger players.

Despite Crawford’s hot play, the Illini (8-10, 1-4 Big Ten) as a team have struggled against its conference foes. The team dropped its first three games, all at home, against Wisconsin, Penn State and Nebraska. The Illini then split their next two road games, winning at Northwestern and losing at Michigan.

Smith, Crawford and head coach Matt Bollant said the team’s struggles of late have come down to closing out second halves and defensive consistency throughout games.

“Coach said in practice earlier (Tuesday), he mentioned that every game we play the first five minutes of the game really, really hard, but the last five won’t be as hard as the first,” Crawford said. “We just have to learn how to start hard and finish hard as well.”

With just 11 regular season games remaining before the Big Ten tournament, six of them on the road, the Illini are not concerned with their postseason chances despite holding a 1-5 road record.

Illini too reliant on starters, turnovers

There’s no doubt the Illinois defense is pesky and generates turnovers. After all, the Illini are averaging just under 24 points off turnovers per game, are ranked ninth the nation in steals per game (11.6) and 10th in turnover margin per game (+6.5). The team’s ability to cause turnovers is impressive, but both the Illini’s offense and defense is reliant on that ability as well as its starting five of Crawford, Smith, senior guard Amber Moore, sophomore guard, Sarah Hartwell and freshman forward Jacqui Grant.

Bollant said that when the team does not force a turnover, it “gives up too many easy shots” which explains the Illini’s poor play against opposing team’s offenses. In the conference, Illinois ranks last in points per game allowed (71.4) and defensive field goal percentage (42.4).

On the other side of the ball, the team’s starters have scored 84.9 percent of the team’s points this entire season. As of late, Bollant has not had much depth to rely on late in games or when his starters are in foul trouble.

“I think (the lack of depth) has hurt us some,” Bollant said. “It makes a huge difference for us. Especially for as hard as we play, we need to have some kids who can rotate off the bench to give us some quality minutes. Our starters won’t be able to play 40 minutes a game the way we play.”

Bollant said he tried altering the starting lineup in order to provide a spark off the bench, starting junior forward Nia Oden in place of Hartwell against Penn State and Nebraska; however, Hartwell could not provide any effectiveness off the bench, scoring no points on five shots in 28 minutes.

Three-point shooting has never been Alexis Smith’s forte, but the guard has implemented the shot into her game with increasing success. In the past six games, Smith has hit nine of her 22 attempts from long range. Prior to her run, she had been 0-4 on the year and 3-37 in her career.

“I really started working on my shot since last summer,” Smith said. “The coaches have been giving me confidence by telling me I’m capable of shooting, so I took what they said and made a choice to change it.”