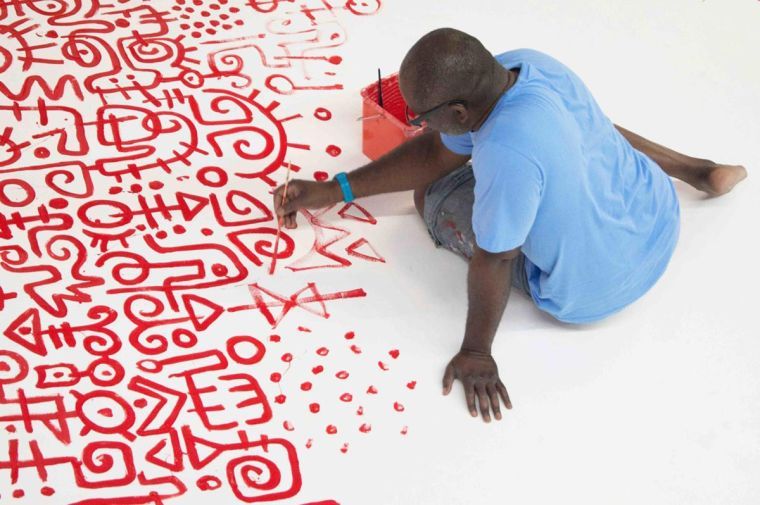 On Thursday, the Krannert Art Museum will introduce its visitors to the drawings, paintings and other works featured in its 2014 spring exhibitions. The four opening exhibitions range from activist art from the museum’s permanent collection to ceramic instillations and recent drawings from contemporary artists.

The exhibits will have a public opening reception from 6 to 7 p.m. on Thursday with opening comments by museum director Kathleen Harleman.

Not Ready to Make Nice: Guerrilla Girls in the Artworld and Beyond

Guest curated by Neysa Page-Lieberman of Columbia College Chicago, “Not Ready to Make Nice” presents the historically significant and continuous work of the Guerrilla Girls, the highly influential group of anonymous female artists and activists who, according to their website, “expose sexism, racism and corruption in politics, art, film and pop culture … with facts, humor and outrageous visuals.”

The gorilla-mask-donning Guerrilla Girls began their confrontation with the art world in the mid 1980s by creating high-profile signs and advertisements to expose the racial and sexual discrimination that the art world continues to have.

Their group achieved fame and profound impact largely by using guerrilla tactics and “their finely honed presentation style characterized by succinct and quick-witted messages and indisputable facts,” wrote Neysa Page-Lieberman in the exhibition catalogue, a publication by Columbia College Chicago.

This exhibit is composed of a collection of some of the group’s most famous work from the 1980s, 1990s and more recent years, featuring 12 large-scale banners, books published by the Guerrilla Girls, a showing of their film, “Guerrillas in Our Midst,” and a slideshow of behind-the-scene photos that show how expansive their global reach and influence has been.

Also included are two interactive spaces, one in which the Guerrilla Girls have posted their favorite “love letters and hate mail.” Museum-goers are invited to comment or leave their own thoughts on interactive installations, according to Koca Polite.

Koca Polite hopes that even though this exhibit may be a first introduction to the Guerrilla Girls, visitors can “understand just how significant these anonymous female artists have been, and continue to be … for the art world and beyond.”

Born in Nigeria, artist Victor Ekpuk is most widely known for his use of improvisational nsibidi in his artwork. Nsibidi, explained Krannert’s Curator of African Art Allyson Purpura, is an ancient form of sacred communication among the male secret societies in southeastern Nigeria whose meanings are only revealed to initiates.

Ekpuk became familiar with nsibidi signs at a young age, but understood only a minimal amount. While a student, his fascination with the writing system grew and tremendously inspired his work. This has led to his exploration of “drawing as writing” and “to the invention of his own fluid letterforms.”

“Auto-Graphics” will feature selections from several of Ekpuk’s newer bodies of work, including digital prints and large-scale drawings as well as a special installation by the artist drawn directly onto the main gallery wall. Visitors will be the first to see this drawing — Ekpuk’s most recent — upon entering the museum.

Purpura ultimately hopes exhibits like this one will expose audiences to contemporary art practices by Africans and their long participation in the global art scene, according to the Illinois International Review. This can show how common assumptions about “African artists” working only in traditional modes such as sculptures and masks is not entirely true.

Additionally, she hopes “viewers will find the work visually compelling and interesting, that they’ll see the play between writing and drawing in Victor’s work and see how kinetic and dimensional drawing as a medium can be.”

Interested in the commoditization of culture, the cultural process of assimilation and the correlation between mass-produced objects and their ever-changing “transcultural value,” Inoue uses installation, sculptures and performance art to explore these relationships and to see how objects attain new meanings when in a different context.

In this exhibit, Inoue has created a mostly ceramic installation made of an assortment of objects in which she replicates the environment of the en-nichi market “where contemporary Japanese pop icons and traditional symbols find hidden commonality,” Mosaka said.

From these mass-produced objects found in markets, she creates hand-casted ceramic objects that represent the popular items and transforms them with conventional Japanese symbols.

“By using porcelain and stoneware, Inoue presents past and present traditions interchangeably, emphasizing the fluid exchange and circulation of cultural symbols,” Mosaka said. “Her investigation examines ways culturally specific objects acquire new meaning beyond their original context, especially when absorbed and disseminated within a global setting.”

Inoue hopes that her work will encourage discussion and questions about globalization, assimilation and their impact.

“Art as Provocation,” curated by Koca Polite, will accompany the exhibition, “Not Ready to Make Nice: Guerrilla Girls in the Artworld and Beyond.”

“‘Art as Provocation’ is meant to showcase a wide range of contemporary artists who are creating art that actively address similar issues of racial and gender inequalities, as well as class disparity and to protest military conflicts,” Koca Polite said. “The contemporary artists featured in this exhibition utilize varying forms of appropriation, humor and subversion to make a statement on current realities and highlight the need for change.”

The exhibition consists of work by more than 20 artists, including large-scale paintings, lithographs, photography, light boxes and ceramic plates.

Polite said she is excited for the exhibit, having first learned about the Guerilla Girls in her first art history class. Now she has the opportunity to expose new viewers to their (and other artists’) important activist works.

“What I hope people realize is that things have gradually progressed in regards of equality of race and gender, but we as a society are no where near the equality we should be at,” Polite said.

Additionally, she hopes that her exhibit will show how a group of various artists — diverse in gender, race and sexual orientation — continue to use their art in varying ways to reveal the different inequities within the art world.

Each exhibit is free to the public, with a suggested donation of $3.