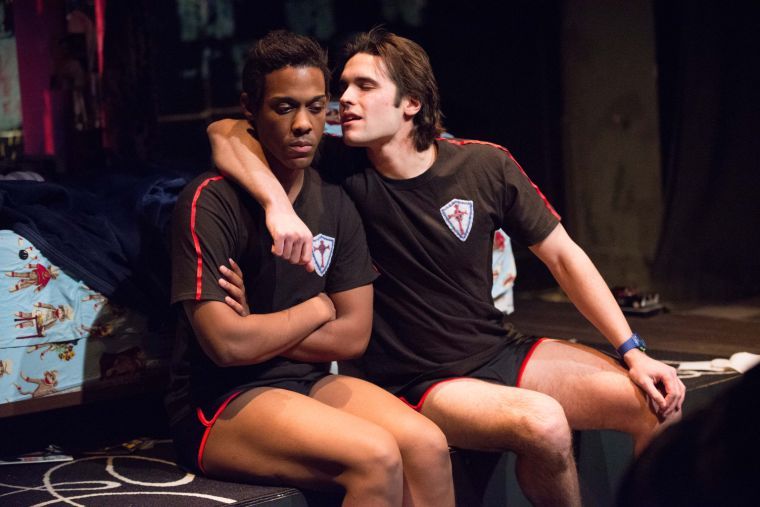 William Rose III (left) and Maxwell Tomaszewski (right) perform as Justin Simmons and Brandon Hardy during the dress rehearsal of “Good Boys and True” which premiered at the Station Theater in Urbana, Il. on Thursday.

The Station Theatre in Urbana has a reputation for selecting performances that challenge the comfort and emotions of its actors and audience. “Good Boys and True,” an avant-garde, socially critical work by emerging playwright Roberto Aguirre-Sacasa, does just that. Premiering in 2008 at the Steppenwolf Theatre in Chicago, Aguirre-Sacasa’s work dares the audience to consider the perhaps unforeseen implications that a stereotypical privileged lifestyle has on those who experience nothing less as they grow up.

The play tracks the events that follow a sex tape scandal at an all-boys prep school in Washington, D.C., during the late ‘80s, highlighting the emotional turmoil for those involved. With unexpected twists and turns, the script keeps the audience entertained and in thought the entire time while the cast gives a compelling, emotional performance. But in what appears to be an attempt by Aguirre-Sacasa to keep the audience guessing, there were times when I could not help but think the script aimed to accomplish too much, sacrificing character depth and dimensionality for raw, emotional intensity. Brandon Hardy (played by Maxwell Tomaszewski), the boy accused of participating in the sex tape, is often inextricably confused, misguided and immature while his mother, Elizabeth Hardy (played by Chris Taber), is almost always a remorseful parent yet persistent advocate for a privileged lifestyle.

Tomaszewski’s and Taber’s performances were undoubtedly impactful, though. Both spoke to how their roles challenged them unlike anything they have done in the past.

“It was hard not to judge him (Brandon) while doing and relating to the role,” Tomaszewski said, adding that it was “interesting to play a morally ambiguous character.”

“This mom goes on a journey that I have not experienced before,” Taber said. “She learns a lot about facing skeletons in the closet. She thinks she’s done it all right, but it turns out she hasn’t.”

The play’s blocking and set is interesting and effective in how it utilizes three side-by-side sets throughout the performance. Brassieres hang from the set pieces and seem to adorn each scene as a subtle reminder of the pervasive, powerful force that carnal lust plays in the lives of those who grow up thinking their social privilege inherently makes them invincible to moral reasoning and implication.

“The production looks at how we raise our sons to treat our daughters,” said director Thom Schnarre. “It looks at the attitudes we give our boys about how they view girls they’re with.”

In addition to obvious discussions of class and social hierarchy during the material culture of the 1980s, Aguirre-Sacasa’s work attempts to intertwine themes of homosexuality, friendship and taking advantage of others, especially young women. The cast effectively triggers an emotional response by playing off their respective character’s relatable human flaws, but sometimes each character can either become too emotionally predictable or confusingly exaggerated. By the end, it is difficult to feel closure as Brandon makes abhorrent decisions that have little to no resolution. I wanted to see more growth from Brandon and his mother, but instead at times saw more implosion as the situation spirals way more out of control than it should have.

However, at the same time, I could not help but sympathize with the characters from the performance. They face issues that I imagine many students here at the University can understand regarding how one deals with the privileges given from a young age and how this can translate to both good and bad decisions. The problem with some of “Good Boys and True” is that I struggled to empathize with the characters. Perhaps students with a firsthand relationship to the coincidentally (or not so coincidentally) apropos 2006 Duke lacrosse scandal can empathize with Brandon and his mother, but I had to be creative in my approach to the play.

Tomaszewski eloquently spoke to how one can empathize with his character.

“We all know people in positions of power destined for greatness, but the show takes that situation that we all see and goes deeper, and we get to see the implications,” he said. “(The play) makes you think about whether or not those roles should exist and what power do we give them in our society. … There’s a lot of pressure on them to fulfill that image.”

Despite what are at times underdeveloped side plots and somewhat exaggerated conflicts, Schnarre has directed this cast to effectively showcase local talent in a way that should not be missed.

“This is kind of a dream project,” Schnarre said. “Watching what I’ve found intriguing in written form come to life has been really cool.”

Matt is a freshman in DGS. He can be reached at [email protected]