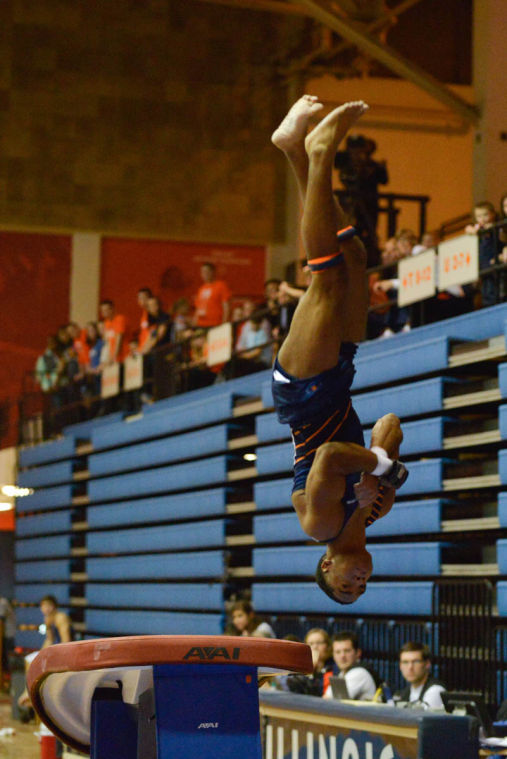 This came after tying the Buckeyes for second place at the Windy City Invitational last weekend.

The Illini got off to a hot start on floor, defeating Ohio State 72.50 to 70.50. The team was led by freshman Chandler Eggleston, who won the event with a score of 15.2. It was his third floor victory in three meets for the season. Redshirt sophomore C.J. Maestas and sophomore Fred Hartville placed third and forth in the event, respectively.

Illinois built on its start by inching out the Buckeyes on the pommel horse. Michael Newburger secured the individual event title for the Buckeyes, but Illini posted the next best three scores to win the event.

Maestas won the rings title and sophomore Max Mayr, and senior Cameron Rogers tied for third with scores of 14.50. The Illini achieved a three-event sweep during the first half of the competition.

Ohio State started vault very strong and looked to be gaining back momentum until Eggleston continued his excellent performance with a 15.10, which was good enough for first place.

“I was pretty nervous, but I know everyone trusts me,” Eggleston said.

Hartville followed Eggleston with a 15.05, completely regaining the momentum for the Illini and placing second individually in the event.

Ohio State got its first team victory during parallel bars even though senior Jordan Valdez had an impressive performance scoring a 14.40 and placing second.

Heading into the final event the Illini led by a narrow margin but still needed solid performances on the horizontal bar to put the meet away. Ohio State made a push with top scores from its first gymnasts, but Eggleston responded with a 14.00, which was good enough for a fifth-place finish. Valdez, the last gymnast to compete, gave the Illini a victory with a clutch 15.20 and won the event.

Head coach Justin Spring said the Illini hit routines he expected them to hit but was adamant that improvement needs to be made. He also said that the team needs to get sophomore Joey Peters back into the lineup and get Maestas completely healthy.

Hartville echoed this sentiment by saying the team needs to focus on its consistency.

“We need all six events to come together on one day,” Spring said.