Campustown proves to be prime location for karaoke enthusiasts 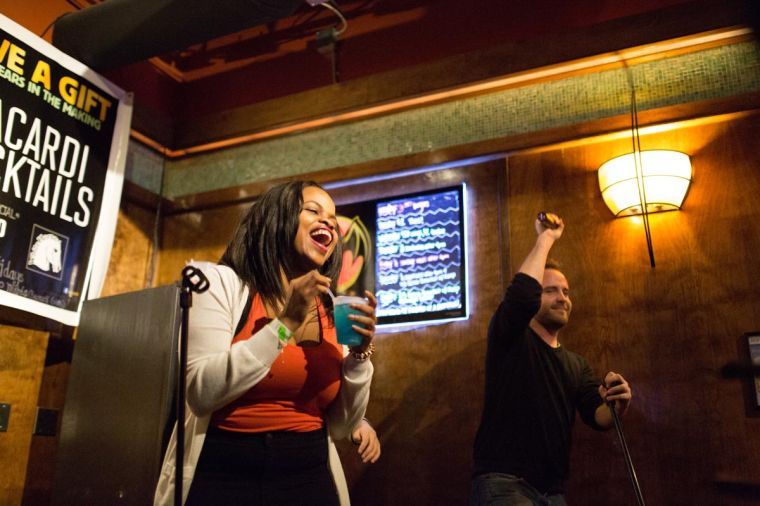 For college students in Champaign, Wednesday night can mean attending karaoke night at a local bar on campus.

“It’s a different option — a way for us to be even more crazy than usual and have some fun,” said Blake Quinlan, freshman in Business. Quinlan said his favorite karaoke experience was at White Horse Bar and Grill when he and some friends sang Journey’s “Don’t Stop Believin’” and got the whole bar singing with them.

Jamie Norton, who DJs karaoke night at Firehaus Bar and Grill in Champaign every Wednesday night, said he witnesses the good and bad of karaoke singing on a regular basis.

He sometimes jumps in with another microphone to help people when they lose track of the beat of the song. The only time he will not jump in and help are when people “bite off more than they can chew” and sing songs that not even he can handle — like Macklemore. He did help someone out with Eminem the other night though — he can do Eminem.

After being a karaoke DJ for 12 years, Norton said he understands why students, and people in general, are attracted to singing karaoke.

“I think it’s everyone’s chance to be a rock star for four or five minutes,” Norton said. “It’s their moment in the spotlight. They’re blowing off steam from the week, from tests or whatever they have going on. This allows them to forget about all of that for a few minutes and have everyone cheer them on.”

He said he was most surprised by the amount of Disney songs that students request to sing, like “I’ll Make a Man out of You” from “Mulan;” “A Whole New World” from “Aladdin;” or “Just Can’t Wait to be King” from “The Lion King.”

“I was expecting the Backstreet Boys and NSYNC, but not the Disney songs,” Norton said.

Along with the Disney songs, Norton said some other crowd-pleasers are Billy Joel’s “Piano Man,” Don McLean’s “American Pie,” Def Leppard’s “Pour Some Sugar on Me” and any boy band songs.

Alyssa Lies, junior in Media, said she and her friends used to go all the time to White Horse to sing karaoke and would actually sing girl band songs, such as the Spice Girls.

She said one night when they asked a stranger to videotape them singing, some of his friends ended up jumping on stage with them to join in the singing.

“That’s the fun part, when random people join in with you,” Lies said.

Ninos Baba, sophomore in FAA, said he lives in an apartment on Second and Green streets near Red Lion. During the fall, he said he often would hear people do a mass sing-a-long of Miley Cyrus’ “Wrecking Ball” at Red Lion before the bar closed at 2 a.m. Although this is not karaoke, he said the fact that people are singing at the bars shows why karaoke works on a college campus.

“It’s a change from just dancing. You go somewhere, you sit down, have a few drinks, embarrass yourself and have a good time,” Baba said. “It’s a change from what we usually see. We’re here for four years and sometimes it can get a little repetitive, so karaoke is a good break.”

Baba himself said the worst karaoke song he has ever sung was “Survivor” by Destiny’s Child because he didn’t do the song enough justice.

Justin Gilles, manager at Firehaus, said that from what he has seen, crowd-pleasing songs generally have a part in the song where the crowd can sing back, like “Shout” by the Isley Brothers.

Gilles loves karaoke night so much that he specifically asks off every Wednesday night so that he himself can attend karaoke night. He said he first sang karaoke when he was stationed in the Airborne Infantry at Ft. Bragg, N.C.

“There was a tiny karaoke bar right outside of Ft. Bragg, a stones throw away from where we were,” Gilles said. “We walked in there one night not knowing what it was, and my buddies and I just fell in love with it. We ended up going there every weekend.”

He has been working at Firehaus since December 2012 and has seen his share of karaoke songs.

He said he thinks college students like karaoke so much because “it gives them the excuse to DJ the party they’re at. It also gives guys an excuse to go up there and sing Backstreet Boys and not have to admit that they like it.”

One of his favorite moments at karaoke thus far came the other night when one of their regulars got up to sing Celine Dion’s “My Heart Will Go On.” Gilles said he and another man carried another bar patron around with his arms spread out in the famous “titanic pose” during the song.

Regulars like this are common for karaoke, Gilles said. He said he figures every karaoke bar has about five to 10 regulars who come every Wednesday.

He said the best reactions usually come when guys get up there and sing girls’ songs, like “Call Me Maybe,” where no one even expects them to hit the notes.

He said he has noticed that more guys than girls sing at karaoke, and when girls sing it’s usually in big groups.

“I honestly think they should charge maybe five bucks for people to sing ‘Don’t Stop Believin’’ — that or ‘Bohemian Rhapsody’ — because no one can sing them; they’re tough songs,” Gilles said.

However, Gilles said regardless of your ability level, the most important part is getting up there, committing and having fun with it.

Throughout his 12 years as a karaoke DJ, Norton has seen his share of competitive karaoke and has worked gigs where most people sit back and like to judge the singers. Here on a college campus, he said it’s different.