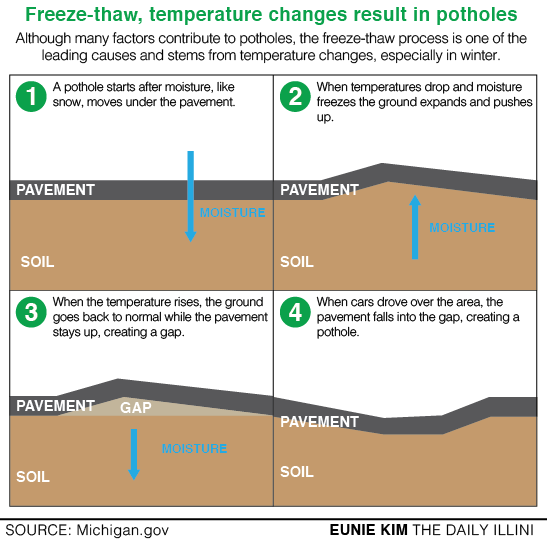 With colder temperatures and extreme winter weather comes a greater risk for potholes to form.

“If something’s worse, it’s because we’re having a worse winter,” said Kris Koester, Champaign Public Works public information officer. “Also with that, us taking people off the streets more and putting them behind the plows, that’s less time they’re filling the potholes, so of course they’re going to be more noticeable.”

While the process known as the freeze-thaw cycle is not solely to blame for the creation of potholes, it does contribute to pothole creation, said John Collins, Urbana Public Works operations director.

“We’ve had some snow, and we’ve salted it. And then we get more precipitation, and that moisture itself freezes,” Collins said. “We’ve had temperatures that go up 40 degrees after being down to 10 or 15 degrees, and anytime that temperature fluctuates above or below freezing is when we’ll have potholes.”

The freeze-thaw cycle is not the only issue pavement faces, said Civil Engineering Professor Imad Al-Qadi.

The asphalt-concrete type of pavement is made up of aggregate and is held together by asphalt binders, which acts as a glue. When moisture gets into the pavement, it can strip the aggregate of the binder, much like peeling a banana, Al-Qadi said.

After the aggregate is stripped of the binder, it can begin a process called traveling in which the aggregate starts to move apart, Al-Qadi said. As the movement progresses, it is possible to start seeing a pothole.

Some of the research being done at the Illinois Center for Transportation involves moisture damage for asphalt concrete pavement, Al-Qadi said.

He said the low temperatures can also affect the asphalt-concrete pavement.

“If major cracks develop then that would allow the moisture to get in, and you end up with major problems, including potholes,” Al-Qadi said.

On the other hand, similar issues can arise with concrete-only pavements. These roads are fitted with a system of reinforcements and joints. Moisture can get inside joints if the seal fails and can cause erosion under the concrete slabs.

These concrete slabs also are subject to issues from low temperatures. Under these conditions, the slabs contract and joints open up and can allow debris in. When the next cycle of warm temperature comes around, the joints will contract with the debris inside and can cause damage, which can create potholes.

Potholes can appear after there is damage below the surface. This damage can be detected by machinery at the Illinois Center for Transportation, Al-Qadi said.

He said it is important to have a quality aggregate and asphalt binders and quality concrete mix to prevent problems in asphalt concrete.

“Bottom line, I can go back and say that quality control and quality assurance is very important for building a good pavement,” Al-Qadi said.

Koester said that, when pavement does start to crack, it is possible to do some work to fix possible potholes, but it can be difficult.

“When we have extreme temperatures like we have here, they’re hard to prevent,” Koester said. “We can keep an eye out for roads that are starting to crack … and get those cracks filled to keep them from spreading into a bigger pothole.”

Collins said that working on fixing cracks and deteriorating pavement in the summer can prevent future potholes.

“A lot of our operations work that we do through the summer is to minimize some of that impact that next season, whether it’s that winter conditions, freezing and thawing or just heavy rain, or it’s just an older section of pavement that needs some repairs,” Collins said.

Filling potholes is a continuing process that takes place year round, weather permitting, Koester said. For example, in the period between June 2012 and July 2013, Champaign filled 21,000 potholes, Koester said.

“I have a feeling that once spring gets here, we’ll have more than enough potholes to keep us busy,” Collins said.

Miranda can be reached at [email protected]