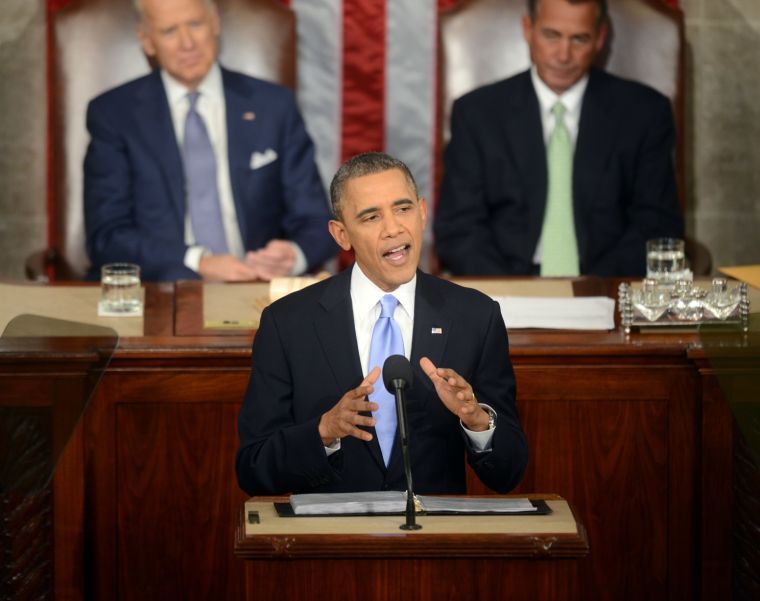 President Barack Obama delivers his State of the Union speech during a joint session of Congress on Capitol Hill in Washington, D.C., Tuesday, Jan. 28, 2014.

WASHINGTON — Hoping to lay a politically bruising year to rest, President Barack Obama on Tuesday declared a “year of action” in which he said he will work with lawmakers when he can, but sidestep them to move proposals to help low- and middle-income families share in the economic recovery.

In his State of the Union address, Obama promised to flex his power to boost wages, protect the environment and channel resources to education, starting with an executive order to raise the minimum wage for federal contractors.

Before a joint session of Congress, Obama told lawmakers in the House chamber that he is eager to have their help to strengthen the middle class, but that he won’t be clipped by Congress in his drive to “reverse these tides” of economic inequality.

“America does not stand still, and neither will I,” Obama said. “So wherever and whenever I can take steps without legislation to expand opportunity for more American families, that’s what I’m going to do.”

Obama’s remarks came as his public approval rating limps along and his Democratic Party nervously eyes the prospect of losing control of the Senate in the November elections. The next few months represent perhaps the best chance for the president to reclaim ground lost by the disastrous rollout of the Affordable Care Act, find a winning economic message and make some progress passing his agenda.

That complex task had Obama walking a fine line in what is typically a president’s most-watched speech of the year. He vowed to work around Congress, but also promised to work with it. He and his party hope to pressure the GOP to move ahead on immigration reform — first lady Michelle Obama sat with a young advocate in the House chamber’s balcony — without angering Republicans who are engaged in delicate internal negotiations over an issue that deeply splits the party.

Obama also sought to sound a hopeful note on the economy, as it shows some of the strongest signs in years, even as his message was aimed at those falling behind.

“After four years of economic growth, corporate profits and stock prices have rarely been higher, and those at the top have never done better. But average wages have barely budged. Inequality has deepened. Upward mobility has stalled,” Obama said. “The cold, hard fact is that, even in the midst of recovery, too many Americans are working more than ever just to get by — let alone get ahead. And too many still aren’t working at all.”

“Opportunity is who we are,” he said. “And the defining project of our generation is to restore that promise.”

Republicans countered with their own message on how to shrink the gap between rich and poor. Rep. Cathy McMorris Rodgers, R-Wash., was tapped to deliver the official GOP response. She focused on what she presented as the Republican Party’s “more hopeful” vision.

“It’s one that champions free markets — and trusts people to make their own decisions, not a government that decides for you,” she said in remarks released in advance. “Because our mission — not only as Republicans, but as Americans, is to once again ensure that we are not bound by where we come from, but empowered by what we can become. That is the gap Republicans are working to close.”

Republicans bristled Tuesday at the president’s vows to use his pen to order executive actions and his phone to rally the public to his causes, questioning whether Obama could really find middle ground.

“For all his talk of going around Congress, he wouldn’t have to if he’d actually try to work with the people’s elected representatives every now and then,” Senate Republican Leader Mitch McConnell of Kentucky said. “I’m saying, ‘Don’t talk about using the phone, just use it. And please, be serious when you call.”

Obama’s minimum wage announcement was a clear example of his effort to bypass congressional roadblocks — and the limits of how far he can travel on that route. Obama plans to sign an executive order raising wages for workers employed by federal contractors to $10.10 per hour, up from the current minimum wage of $7.25.

The increase would largely affect service employees — such as cafeteria workers and busboys at Smithsonian museums — bringing a full-time employee from $15,000 a year to $21,000.

The White House offered no information on how many people would be affected. Outside experts and allies put the estimate at several hundred thousand, a mere slice of the approximately 2 million people employed by federal contractors.

Obama urged Congress to increase the federal minimum wage, stressing the benefit to women, who hold a majority of lower-wage jobs and are an important swing vote in this year’s congressional elections. Raising women’s pay is just one way to “do away with workplace policies that belong in a ‘Mad Men’ episode,” he said.

White House and Democratic strategists believe the issue is one that may find bipartisan backing in an election year. Recent polls show most Americans favor raising the minimum wage — nearly three-quarters in a Pew Research poll conducted earlier this month — although Republicans are sharply divided on the issue.

Obama also highlighted other elements of his economic inequality agenda, calling on Congress to expand unemployment benefits for the long-term jobless and touting new commitments from chief executives of corporations who’d agreed not discriminate against applicants because of extended stretches out of work.

At times, Obama alluded to ambitious plans of his past.

He reminded Americans that he has drawn down the war in Afghanistan and put Al Qaeda’s core leadership “on a path to defeat.” He offered a spirited defense of his sweeping reform of American health care system, smiling as he noted, “in case you haven’t heard, we’re in the process of fixing that.”

He alluded to last year’s ill-fated effort, born out of the shooting spree at Sandy Hook Elementary School, to pass new gun-control measures. He vowed to “keep trying, with or without Congress,” but laid out no specific plans.

On Tuesday, Obama was intent on setting more manageable goals at a time of intense partisan intransigence.

The president said he intends to speed up implementation of the ConnectEd program, his plan to connect all schools to the Internet. He said he will create a new “starter savings account” to help people who don’t have 401(k) plans or pensions for retirement.

He also reminded listeners of his power to regulate power-plant emissions, noting that the shift to a cleaner energy will require “tough choices.” “Climate change is a fact,” he said. “And when our children’s children look us in the eye and ask if we did all we could to leave them a safer, more stable world … I want us to be able to say yes, we did.”

Obama also proposed initiatives that would need approval from Congress. He called for expansion of the Earned Income Tax Credit for workers without children, including non-custodial parents. The idea, which Obama has embraced before, is to raise the maximum credit and make it available to more low-wage workers.

The White House is also seeking to show what one official described as “creative” uses of its power that don’t involve executive orders or legislation. Obama plans to meet with CEOs to encourage them to hire the long-term unemployed, meet with college presidents to talk about affordability and initiate a partnership with businesses, community colleges and labor unions to create more on-the-job apprenticeships.

The president has already publicized some of these efforts and plans more events. On Wednesday, he’ll set out on a two-day, four-state tour that starts at a Costco in Maryland. The big-box retailer has raised wages above the required minimum.