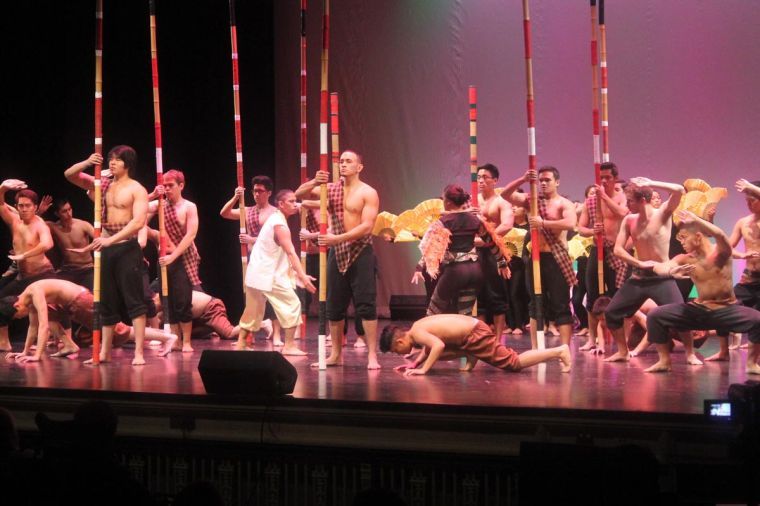 This, meaning “How did you get here?” in Filipino, was the theme for the second annual Filipino Culture Night, a conjoined benefit show and dinner hosted by Philippine Student Association at Lincoln Hall and Presby Hall, respectively.

The night kicked off at 7 p.m. with keynote speaker Xavier Hernandez, a graduate assistant at the Asian American Cultural Center and University graduate student.

The show was divided between two acts, with the first act exploring the theme of understanding Filipino culture, and the second covering the conflict of interracial dating. The Lincoln Hall event showcased four dance performances — modern, culture, throwback and formal — along with two skits that demonstrated Filipino values and culture. Special guest performers included the TASC Special Ops, who performed Chinese Yo-Yo, and VSA Lion Dance, which mimicked the movements of a lion combined with tumbling, among others.

One memorable moment was when the singing group Boses performed a song in honor of the victims of Typhoon Haiyan, which devastated the Philippines in November.

Christina Malibiran, sophomore in Media, acted and danced at the event. Malibiran, a leading character in the skit during Act II, played a mom in a scene about interracial dating. She said she has been preparing for the show since September.

“Everyone gets to bond — that was the best part. Having fun and dancing with friends,” Malibiran said. “I hope those who attended were able to embrace the culture and learn what Filipino culture is all about. FCN shows what it’s like to be a Filipino American.”

“It was interesting to learn about Filipino culture; one of my high school friends is Filipino and he brought me to the show last year and I enjoyed so I came again this year,” said Austin Estes, sophomore in Engineering.

Lizah Doctor, the president of PSA and senior in LAS, said there were also raffle tickets for sale and prizes as way to donate to Advancement for Rural Kids (ARK), an organization that aims to improve education and health among children in impoverished rural areas. PSA hoped to reach a goal of $1500 from the night’s events to send to ARK.

The main point of the organization is to connect with the Philippines and its culture, that’s the biggest thing,” Doctor said. “It’s easy to get lost in all the dancing, but the main reason why we were there is for the cause.”

Chua said the reason the RSO chose to give to ARK is to benefit the organization by providing food and school supplies, among other things.

“We had the support from our families, our friends, our educational system,” Chua said. “Being college students, we are privileged to be in an institution that gives opportunities. We are trying to feed first and second graders, think about that. If you don’t make it past those first stepping stones, you can’t even go on.”

Chua said he was glad that event raised awareness of ARK. The performance also allowed audience members to learn about different values and lessons of Filipino culture and conflicts that Filipino face and experience throughout their life, he said.

“We hoped to raise awareness about Filipino culture and that we can make a difference in the campus, community and abroad,” Doctor said.

Ariana can be reached [email protected]