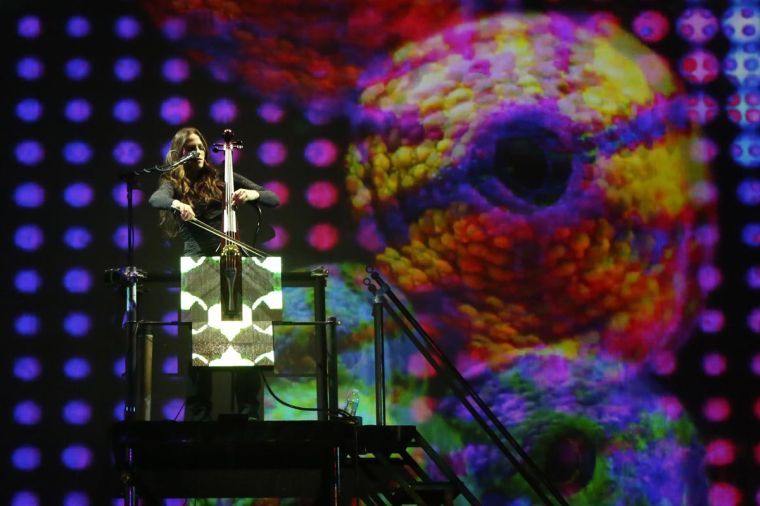 Cellist Maya Beiser performs “Room No. 35” of the Labyrinth Installation Concertos, which premiered Saturday. She plays a sculpture interactive LED cello specially made for the installation.

Labyrinth is cutting-edge on many fronts. It features the K-Bow, which senses what the musician plays and wirelessly sends real-time information to a computer and an LED cello, which combines light with sound and video in a dazzling showcase. Set in the Tryon Festival Theatre, the featured artist was surrounded by projection screens during the performance, where video, images and pre-recorded audio was interwoven with their music. The University’s eDream (Emerging Digital Research and Education in Arts Media) Institute worked to make a mesmerizing, multilayered digital environment for the artists.

“It’s an exciting kind of pinnacle in terms of the exploration between visual arts technology and music,” Prestini said. “It’s a unique project for me.”

Prestini — whose music has been lauded by The New York Times as “radiant, and amorously evocative” and has earned her a spot on NPR’s “Top 100 composers in the World under 40” — has been immensely excited to premier Labyrinth. She has especially enjoyed incorporating the interdisciplinary aspects of video and lighting into her music.

“There are certain themes that I like to explore that I think are heightened by multimedia, and that’s why I really like to use it,” she said. “We definitely live in a visual culture, so expressing ourselves through music, lighting, direction and visual is a very natural way for us to think.”

In “House of Solitude,” the audience traveled on an explorative journey as Dufallo seems to ponder the dynamic interplay between solitude and the need for human contact in one’s odyssey toward self-discovery. It featured sound recordings of everyday life, such as washing machines, along with sounds of nature, like horses galloping. In “Room No. 35,” Beiser delves into the intricate facets of human emotion and soul.

Audience members Herbert and Norma Marder enjoyed the piece as a whole, but favored the first part due to how it had a more coherent, logical timeline.

“The second one was slick in sensation,” Norma said.

Nevertheless, the two found the performance “beautifully done,” and Norma called the first part “a most extraordinary work of art.”

Nate Scheidler, senior in Engineering, said he enjoyed how the first part of the two concertos explored “chaos and order and man-made structure.”

Prestini said she aimed to create an experience that incorporated a sense of chance because the technology works in such a way in that each performance may not be the same as the last.

“You put chance into life or into a piece and that really meshes with the idea of what you can and can’t control,” she said.

Ultimately, Prestini hopes the performance evokes a sense of “multiple selves,” yet offers a sense of solace in how we can unify these selves.

“We live in a time where we have extreme communication, but we’re also very detached,” she said. “So that plays a big part of trying to unite these different selves and your own relationship to others. Both pieces explore this idea of multiple identities and multiple selves and connectivity.”

Matt can be reached at [email protected]