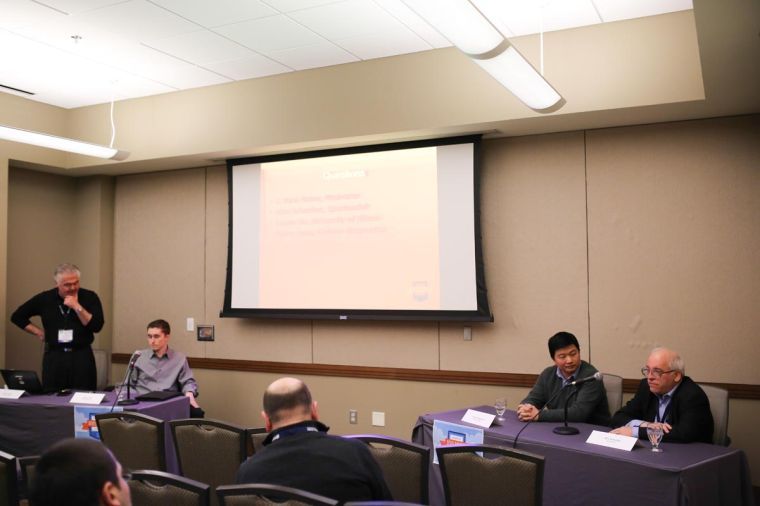 Alex Scheeline of Spectroclick, answers a question from University panel moderator Mark Nolan during a panel in the Excellence Room at the I-Hotel for Mobile Development Day, on Friday.

Executives and developers from various corporations attending the Research Park’s Mobile Development Day filled the Chancellor’s Ballroom at the I-Hotel on Friday.

The event consisted of keynote speeches and panels and allowed for companies to network and share ideas about mobile technology.

John Reid, director of product technology and innovation for John Deere, described how the event has been beneficial for his company and why John Deere chose to sponsor it.

“There’s a lot of commonality amongst the various companies and industries and you get a sense of what a huge opportunity this is,” he said. “We sponsored this to try to bring our people together around the technology.”

Reid, a former professor of agricultural biological engineering at the University, described how he enjoys working with universities from both an academic and industrial standpoint.

“I love working with universities, so even with John Deere, I work with not only the University of Illinois, but universities all over the world,” he said. “Industry is the way we transition the learning from university to practice, so it’s very rewarding to get to be a part of that.”

He also mentioned that the University hosts one of two John Deere centers in North America, thus making it one of their “key universities globally.”

Laura Frerichs, director of the Research Park, said this is the third Mobile Development Day and its interests have evolved from creating apps to mobile development on all levels.

“In the beginning we felt that mobile (technology) was a big opportunity for entrepreneurship, which is a major theme of what we do in the Research Park,” Bleill said. “That’s evolved and mobile is permeating through everything and it doesn’t stand on its own anymore. It’s part of the fabric of our society.”

Chad Lilly and Tim Kueholhorn, director and systems engineer at Lextech Global Services, agreed with Bleill in their keynote address, called “Mobile as an Interface to Everything.”

Kueholhorn added that connecting hardware to mobile devices is the biggest business opportunity in the next two years.

“We’re committed to adding value to our community and to the park,” Bleill said. “And we feel that doing these kinds of events does just that.”

Edward can be reached at [email protected]