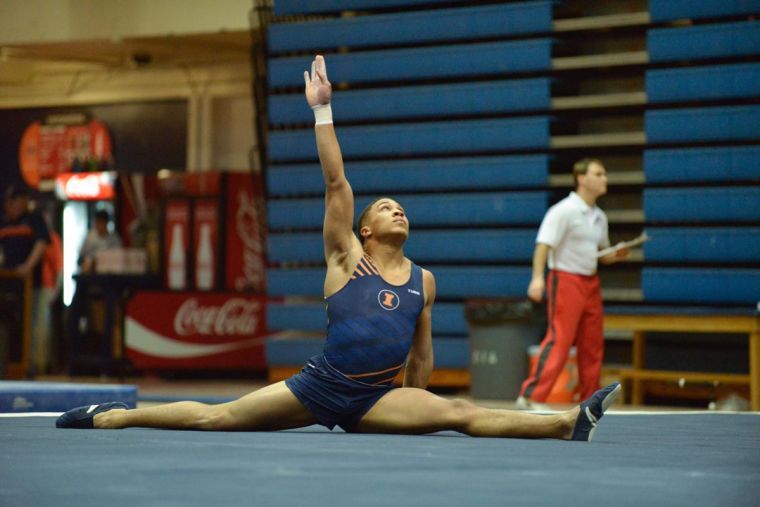 Chandler Eggleston performs the floor routine against Ohio State at Huff Hall on Jan. 26. It was a close meet, but Illinois came out on top.

The No. 8 Illinois men’s gymnastics team got off to a hot start this season defeating some of the top teams in the Big Ten, but that momentum came to an end with a disappointing loss Saturday against No. 7 Minnesota.

In a three-team meet against Minnesota and No. 10 Nebraska, the Illini finished second with a score of 432.700.

Despite the disappointing performance, the team was led by top routines from freshman Chandler Eggleston, redshirt sophomore C.J. Maestas and senior Jordan Valdez.

Eggleston took home two titles placing first on floor and vault. On the floor, he set a season-high with a 15.450, which was good enough for his fourth straight Big Ten Freshman of the Week honor. He is the first Illini gymnast to win four consecutive Freshman of the Week awards in school history and currently has seven first-place finishes this season.

“C.J. was the gymnast of the day,” head coach Justin Spring said in a press release. “He stepped up for his first time competing all-around since (the) 2012 Olympic Trials and coming back from injury.”

Valdez had another top-notch performance on high bar taking the title with a 15.350 and placing third on parallel bars.

Other Illini set personal bests, but the team was unable to land enough routines to guide it to victory over Minnesota combining for a 48 percent hit ratio, which is one of the worsts of the season.

With a lineup focusing on Winter Cup, where some players will have the opportunity to compete for a spot on the national team, Illinois was unable to repeat the consistency that has been so heavily emphasized this season.

“The meet was disappointing,” Spring said in a press release. “We were still in the fight at the end, but we really gave it away on our last event.”