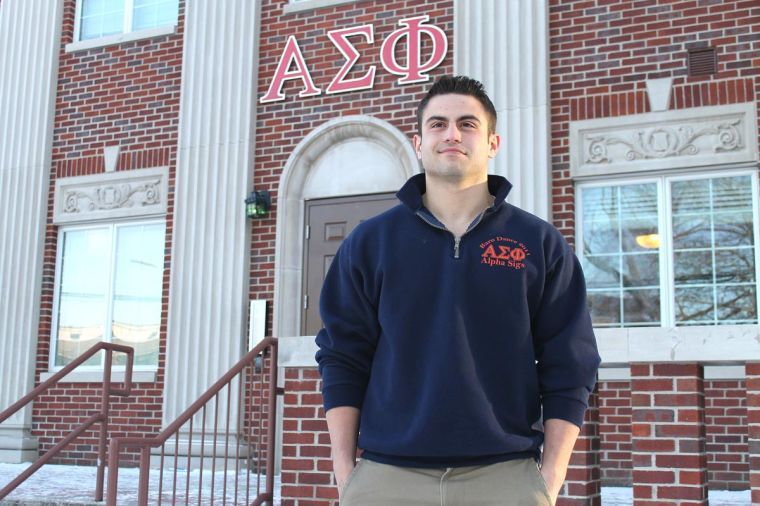 This past summer, Blaize Stewart, member of Alpha Sigma Phi and senior in Media, was offered a job selling ads for The Odyssey, a series of Greek life-oriented online and print newspapers spread across several college campuses in the U.S. Little did he know, this summer job would soon become the link between his passion for journalism and his love for being a part of the University’s Greek life.

Stewart, along with three other fraternity men, Peter Hong, senior in LAS, Andy Serbe, senior in LAS, and Jack O’Connor, junior in Media, were hired by The Odyssey’s national office to sell enough ads to generate revenue to put the paper into print on campus. It wasn’t an easy job.

“It was a pretty rough summer,” Stewart said.

However, the four men succeeded and managed to raise enough money to get The Odyssey into print. After the job was done, Stewart told his boss at the national office he was more interested in the creative side of the publication, rather than the advertising side. He interviewed to be the editor-in-chief in August and earned the job.

Once he got the position, Stewart said he had to gather enough interest in the paper to create an entire staff, so he reached out to various Greek chapters to recruit members.

“In the beginning it was rough; there were only 10 of us on staff,” he said. He hired and now works with two social media directors, sophomore in Media Allie Pitcher and senior in LAS Kelsey Schattnik; two contributing editors, sophomore in Media Vee Shahab and junior in LAS Melissa Johannesen; and the writing team. The Odyssey now has more than 50 people on its staff and is still open to welcoming new members.

“I’m always interested in hiring new houses and new people,” he said. “If they’ll be a part of the team, they can be a part of The Odyssey.”

The Odyssey’s staff comprises members of Greek chapters, and a majority of their articles are about various aspects of Greek life. Stewart said they have print issues delivered to chapter house Thursdays, and articles are uploaded online two or three times per day. He also said that the newspaper is trying to have the paper distributed in more public places on campus, such as the ARC.

“(Stewart) is great because he’s a lot of fun, but also knows when things need to get done,” she said. “He’s a really good person with a good head on his shoulders.”

One of Stewart’s main goals as editor-in-chief of The Odyssey is to negate the stereotypes of fraternities portrayed by the media. He personally did not want to be a part of a fraternity at first. But once he rushed his older brother’s house, Alpha Sigma Phi, after his transfer to campus during his junior year, he realized that he could see himself spending the remainder of his college years with the men in the house.

“It’s really easy for people to judge fraternities from the outside, but once you’re in it, once you experience the brotherhood, the philanthropy and the connections, it’s a really great experience,” he said. “I really want to help promote that positive side, because usually in the media we don’t get such great reviews.”

He also appreciates the connection between his fraternity and his work on The Odyssey. He said he considers the paper to be part of his Greek life experience, and that it has, in fact, enhanced it. He said he also enjoys getting to know people in other Greek chapters.

Stewart’s fraternity brother and roommate, Jake Flannigan, sophomore in Business, said he is very proud of Stewart’s work on The Odyssey.

“It’s outstanding that he brought it up from nothing, and it’s awesome how much work he’s put into it,” he said. “How much the name ‘The Odyssey’ has grown on this campus is really neat, and it wouldn’t be anything without Blaize.”

One of Stewart’s favorite parts about being editor-in-chief is the response from his readers.

“I really enjoy the fact that people know what we stand for and why we’re here,” he said.

In the future, Stewart hopes to follow his passion for journalism and work at a magazine in New York City or Chicago. However, because he very much enjoys being editor-in-chief of the The Odyssey, he is also considering continuing to work for their national office.