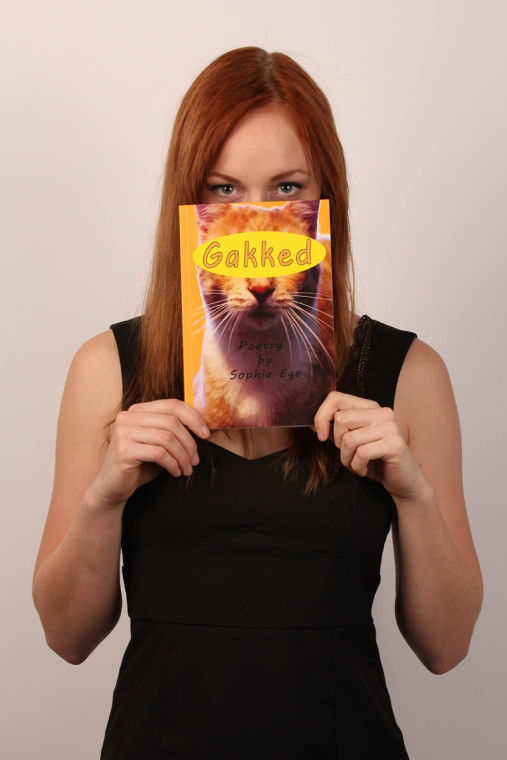 In the quiet moment after she has expelled a poem down onto a sheet of paper, Sophia Ege, junior in LAS, breathes a sigh of relief. As immersed as she is in her emotions at the start of the process, the end is all revealing — Ege deconstructs her prose, as well as the root causes for her emotions.

“I think a poem is created before you write it, and you simply fill in the blanks and you feel around for what fits it best,” she said.

Poetry is the house cat Ege comes home to and tells about her day, the method through which she bleeds out her frustrations and an avenue to express the silly life events she experiences. And on Jan. 29, Ege put together about 50 of her poems and self-published “Gakked,” her first book of poems. According to a 2012 report published by Bowker, the number of self-published books produced in the U.S. annually has tripled since 2006.

After she chose an appropriate cover illustration for the book, a photo of her cat Simon, a Champaign native, Ege submitted her poems and pages to CreateSpace, an online self-publishing web service.

She received a physical proof of the book in the mail, made more edits online and then completed the final version.

According to Ege, “Gakked” is about adolescence, coming onto a college campus, womanhood, violence and how she has been shaped throughout her life. She also uses her poems to challenge the role education plays in the lives of students today, and relationships with the leaders in her life. However, she juxtaposes these themes with happiness and an overwhelming gratitude for life.

“I think gratitude comes out of realizing that the world is going to be okay in your worst moments, and realizing that you do have a support system,” Ege said.

Ege met one of her biggest supporters and best friends, Kirsten Onsgard, junior at DePaul University, in high school. Both managed their school’s Writer’s Club and bonded over a love of creative writing.

“She and I provided each other a lot of support in high school,” Onsgard said. “For me, like a lot of people, high school was rough. Though I don’t want to speak on her behalf too much, I think we somewhat shared in the struggle of finding support and finding people to confide in.”

When Ege came to the University campus, she first struggled to find a supportive social structure and a group of people to identify with. These challenges, along with others she encountered, allowed Ege to learn about herself through her poetry.

“Especially in poetry, writing and analyzing the environment around you, you realize that there is a balance to everything,” she said. “And most of the time, the good is in your favor. It’s just a matter of perception and picking up on it.”

Though Ege began writing poetry during her sophomore year of high school, she started putting “Gakked” together about six months ago. This school year, Ege adopted a new mentality and decided it’s “now or never.”

“It’s so great to see the girl who started a small club for poetry at school become a woman who is now publishing her work,” said Cara Jones, Ege’s friend from middle school and junior at DePaul.

“Gakked” is available for purchase on Amazon.com, but Ege’s goal in finally publishing her work was not a monetary one.

“The purpose was to get it published,” she said. “I’m not looking to make a lot of money off of this. It’s just me saying, ‘Here I am.’ And that’s fulfilling enough in itself.”