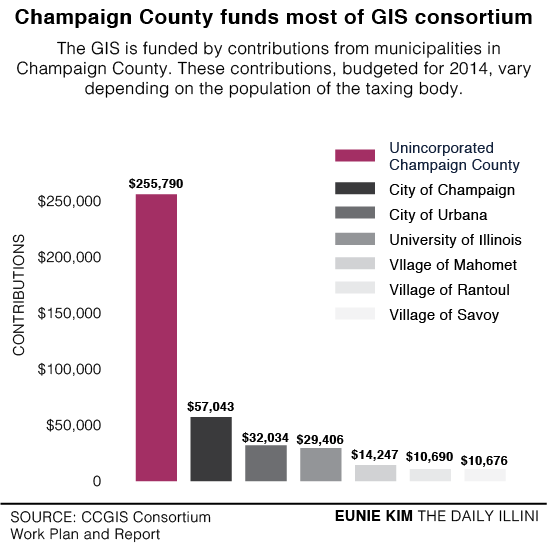 Police officers in Champaign County have a unique tool at their disposal. When they receive a call about a disturbance, they can enter the address into a database that connects officers to an array of information about the destination, such as names of property owners, or directions to the site.

This “Geographic Information System,” said Leanne Brehob-Riley, director of the Champaign County GIS Consortium, can be a very valuable tool in the planning stages of major operations.

“We’ve had officers come in … if they know there’s drugs in an area and they want to plan out the best way to get to the property … they’ll come in and ask for aerial photos,” she said.

Each of these members pays a fee to gain access to the system. The fees are based on the population of each body. Additionally, the consortium receives about $100,000 in additional revenue selling the map data to private entities. But on Monday, the Urbana City Council passed a resolution to change the language in their agreement with the consortium. The updated language clarifies the role of technical advisors and also updates the process of data disclosure to non-member agencies.

Urbana City Council member Diane Marlin, Ward 7, said she had seen similar tools before that stored more information and tied it to property addresses. She said the current GIS was, in comparison, slightly outdated.

“It’s a very useful tool for (city staff) in our daily work,” he said.

Additionally, residents can access the spatial data maintained by the consortium. Users can look at aerial maps of the county ranging from 1973 to 2011, as well as terrain data and other tools that help chart out school districts, voting precincts and more.

Gray said the current GIS could use some improvements, and city staff members are currently working on a proposal to bring before council later this year.

“We really, really need to update our work order and asset management system … we could (have all the capabilities of other systems), but we have to have that software tool,” he said, adding that the upgrade to the system would be costly.

Eli can be reached at [email protected]