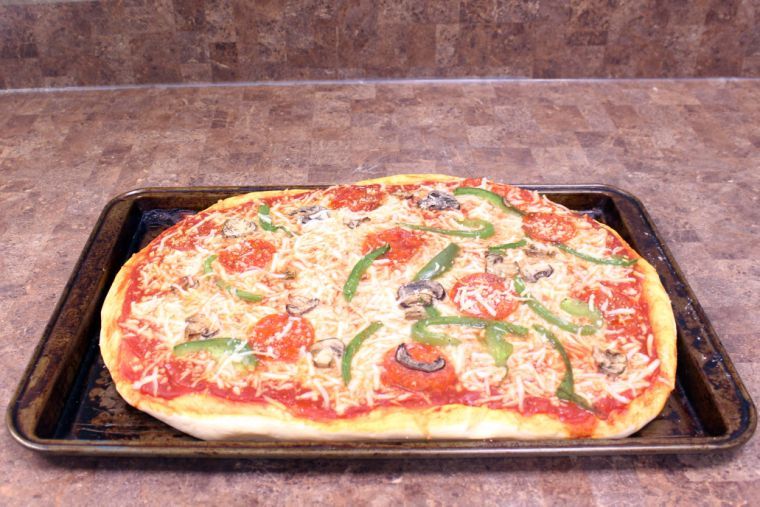 Pictured is a completed homemade pizza made with the recipe. Writer Stephanie Kim chose green peppers, pepperoni and mushrooms as toppings to complete this traditional recipe

Last November, after reading my Dish of the Week article about Antonio’s Pesto Tortellini Pizza, alumnus Paul Jarosz emailed me with one request: to find a deep-dish pizza recipe that he had lost, but that had been printed in the Daily Illini during the early ‘70s.

Thanks to technology, I was able to locate that recipe in the digital archives for his benefit and mine. The pizza recipe was printed in the Oct. 30, 1971, issue of the Daily Illini, in an article titled “Homemade pizza not just a flash in the pan” and written by Daily Illini staff writer Judy Hevrdejs.

Two months later, Jarosz emailed me pictures of the pizza he had made for his wife and daughter, using this 43-year-old recipe. He also sent accompanying text that expressed his excitement in finally making the pizza that he and his roommates had enjoyed during their undergraduate years to break the monotony of eating Hamburger Helper meals and fast food.

Jarosz’s love for the recipe piqued the curiosity of my taste buds. I wondered what could cause someone to be so driven to find a lost pizza recipe. There was only one way to find out: to make the pizza and taste it for myself.

Before any eyebrows are raised at the idea of making pizza from scratch, just know that if I can make it, anyone can. For a girl who holds the reputation of burning anything, it’s a miracle that this pizza turned out edible and, surprisingly, quite tasty.  But all credit is due to the simplicity and straightforwardness of the recipe.

1. Heat milk, sugar, margarine and salt in a pan. As this is heating (toward scalding), combine yeast and lukewarm water — the “most intimidating” part of the recipe, according to Jarosz.

The water has to be exactly lukewarm so that the yeast isn’t killed. If the yeast doesn’t increase or become bubbly after sitting for 10 minutes, you may have killed it and will have to use another package of yeast.

2. After the scalded milk mixture cools to lukewarm, combine it with the yeast and add the flour. Mix well and knead the dough several times onto a floured board or surface. The more you knead it, the lighter it will be.

3. Then, take a cookie sheet or pan and grease it with butter. Flatten the dough into it and create the crust by rolling the dough up the sides of the pan. Set aside to prepare the tomato sauce and toppings.

1. Mix tomato sauce, chopped onion, salt, pepper and oregano, if desired. In this case, I replaced the oregano with chili pepper flakes to give the pizza a spicy kick.

This section imparts the freedom to choose any toppings you desire. I picked pepperoni, green peppers and mushrooms. For fresh vegetable or meat toppings, fry them in a pan before they’re put on the pizza. I also added a bit of salt and pepper to enhance the flavors of the toppings.

Spread the sauce over the pizza evenly and place the toppings on afterward. Finally, add grated mozzarella cheese onto the entire pizza. Lastly, bake your creation in the oven at 400 degrees for about 30 minutes, or until the crust becomes golden brown.

While the recipe is simple, making this pizza is a bit time-consuming. However, this recipe will only exceed an hour in cooking time in rare cases. But of course, I fell into that exception. It took about two hours for me to make the pizza because I made the amateur mistake of setting the oven to 200 degrees instead of 400.

But the time and effort I invested in this pizza was well worth it in the end. Knowing that I made this pizza with my own two hands left me satisfied and content. Plus, the special tomato sauce and homemade dough won over my taste buds.

Just like Jarosz, I look forward to sharing and enjoying this recipe with my friends and family members for years to come.

Stephanie is a senior in Media. She can be reached at [email protected]

Editor’s note: A previous version of this article incorrectly stated that Paul Jarosz and his roommates made pizza to break the monotony of eating microwaveable meals and fast food. They did not own a microwave, and the article should have said they had Hamburger Helper meals. The Daily Illini regrets the error.