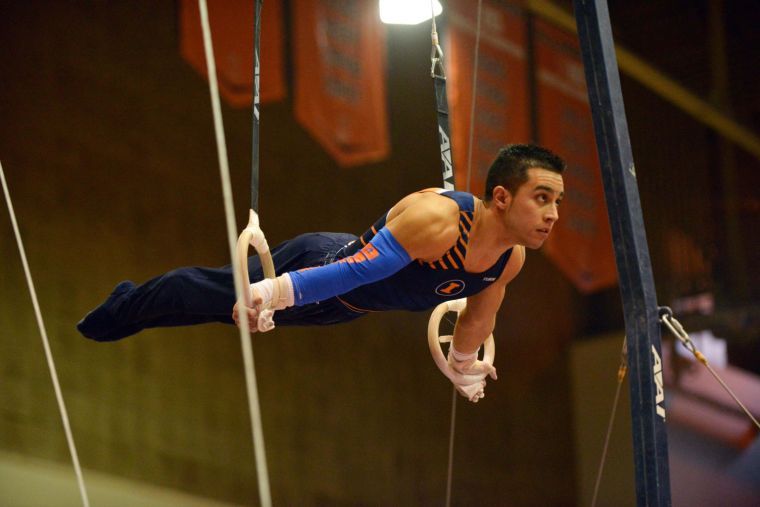 “The energy was great, and we were hitting routines when we needed to,” head coach Justin Spring said in a press release.

The Illini were able to get the much-needed record-setting style.

Redshirt sophomore C.J. Maestas made history breaking NCAA and school records on still rings with a score of 16.450. Maestas also added a second place finish on floor with a 14.850.

“As I said when he broke the school record last week, he couldn’t be more deserving,” Spring said in a press release. “Rings has always been his best, and he really showed that tonight.”

Standout freshman Chandler Eggleston added another solid performance tying for third on floor with a 14.800. Eggleston also placed second on vault with a 14.950 and was third on high bar with a 14.400.

Senior Jordan Valdez who has been a consistent contributor for the Illini all season dominated on high bar, taking first with a score of 15.550, which was a career high.

It was consistency that haunted Illinois against Minnesota. Maestas, Eggleston and Valdez despite top performances were unable to get the job done.

Consistency was no problem against Iowa with standout performances from many of the Illinois gymnasts. Senior Alex Varga contributed one of those performances, tying for third with on floor a score of 14.800. Senior Chad Mason took the pommel horse title with a personal best of 15.350 and was followed closely behind by freshman Matt Foster, who finished in second with a 14.650.

Junior Mike Wilner placed second on rings with a 15.500, a season best. Sophomore Fred Hartville achieved his season best of 15.150 to take the vault title.

Maestas’ consistent performance earned him the all-around title with a score of 89.200.

The Illini’s strategy of resting some athletes in an attempt to keep them healthy for the end of year tournaments paid off this weekend as Illinois competed with a much more consistent lineup.