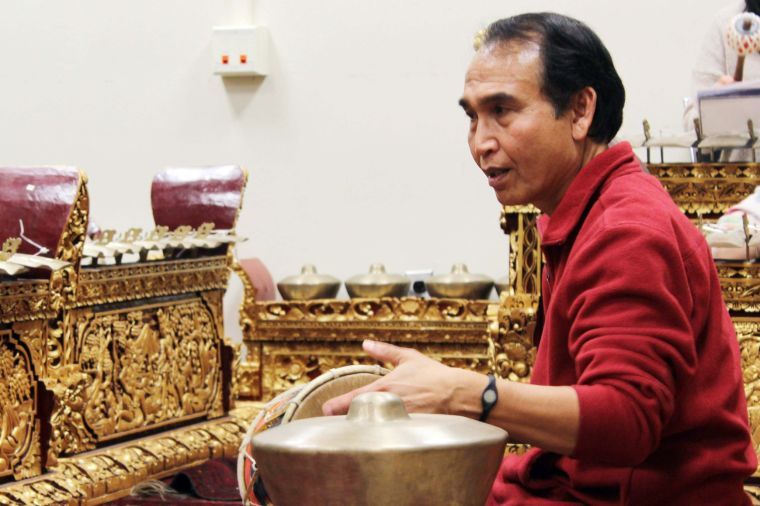 I Ketut Gede Asnawa, professor in the School of Music, leads a gamelan ensemble Feb. 3 in the Music Building. The ensemble meets every Monday and welcomes community members to participate.

Tucked away in the basement of the Music Building, surrounded by floor-to-ceiling wooden lockers and covered with oriental rugs, is room 1188. Inside this Aladdin-esque room is a treasure trove of percussive, gold-leafed instruments, cluttered seat cushions and two chalkboards with scribblings of numerical diagrams and words in an exotic language. This is the gamelan music room, and Professor I Ketut Gede Asnawa is the master.

“Gamelan music originated in the early eighth century on the Indonesian islands of Java and Bali,” Asnawa said. “The two islands approached gamelan music differently. Javanese gamelan music focuses on calmer religious pieces while Balinese gamelan music is meant to be festive and loud. However, both styles use the same instruments and are accompanied by dancers.”

Asnawa’s primary focus during his classes is Balinese gamelan music, an art form he has been practicing since the age of 7.

“We didn’t have TV when I was growing up, but having access to music was easy. That’s how I got started,” he said.

He passes on his gamelan wisdom in his University-sponsored class, as well as a community class he opens on Monday nights to all students and adults in the area.

“The community class began in 2006 as part of an outreach program for the Robert E. Brown Center for World Music. It’s meant to allow a community of players of all levels to participate in making music together through a wonderful mix of easy, medium and advanced interlocking parts,” said Jason Finkelman, director of the global arts performance initiatives for the Robert E. Brown Center.

Students, mostly of Indonesian descent as well as a few music majors, attend the community class. Because the classes are optional, many students will come and go throughout the months, with most players rotating through the different gamelan instruments. Asnawa gauges the students’ abilities and caters each rehearsal to the abilities of the ensemble. Approximately 20 students regularly attend every class, which is enough, as a typical ensemble can range from four to 60 members.

Asnawa teaches these students according to his own theory known as the 5 W’s. The 5 W’s stand for: wiraga, wirama, wirasa, wicaksana and wibawa. The terms mean instrument mastery, rhythm, emotion, wisdom and expression, respectively.

“You must master each W before you move on to the next one. Only then can you be a true gamelan musician. It is very difficult and takes much practice,” Asnawa said.

Gamelan music is difficult primarily because there is not any sheet music to refer to. Instead, musicians must learn the music by rote and use aural skills to keep in time with other members of the ensemble. However, Asnawa uses numerical diagrams to help his players learn the difficult harmonies and patterns of the music.

This is especially complicated as there are many different instruments with these conflicting phrases in the ensemble. A typical setup includes gongs, flutes, drums, cymbals, kenogs, rebabs, sarons and many other exotic, percussive contraptions. The instruments come straight from Indonesia and cost thousands of dollars.

“This price is primarily because of the detailing on the faces of some of the instruments. Each one is covered with gold foiling and intricately carved with patterns of religious scenes and legends from Indonesian history,” Asnawa said.

Although some students come to learn about the history and music of their ancestors, some come to enhance other skills beyond musicianship.

“Gamelan music and Balinese dancing go hand in hand,” said Monica Santos, an experienced Balinese dancer, gamelan musician and graduate student in anthropology. “It’s good to have knowledge of both if you want to do well in either.”

Santos has been attending the community gamelan class for years.

“The trickiest part about the music is the rhythm,” she added. “Once you understand that and how it fits with the dance, it’s much easier to understand.”

Asnawa’s wife teaches a Balinese dancing class at the University as well, and together, their groups put on cultural performances for the C-U area.

“The gamelan music is almost always accompanied by dancing. It’s really meant to tell a story together,” Asnawa said.

The community gamelan class is open to all members and students in Champaign and Urbana. Rehearsal is held on Mondays from 6 to 8 p.m. in the Music Building, and the ensemble’s first performance will be on May 4 in the building’s auditorium.

Jolie can be reached at [email protected]