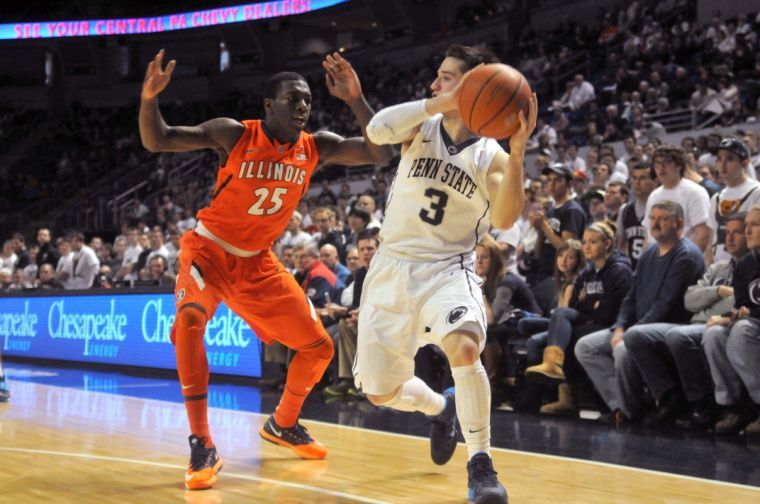 Illinois’ Kendrick Nunn (25) attempts to stay in front of Penn State’s Graham Woodward (3) during their Big 10 match up at the Bryce Jordan Center. The Illini won 60-55.

With 26 seconds left, the shot clock winding down and Illinois leading by one, the Illini found themselves in a familiar position Sunday.

In Illinois’ last two trips to State College, Pa., Penn State had a knack for knocking off the Illini in the closing seconds.

Two seasons ago, Tim Frazier hit a jumper with eight seconds left to propel the Nittany Lions to a 54-52 win.

The season prior to that, Penn State’s Andrew Jones converted an offensive rebound with one second remaining to beat the Illini, 57-55.

In order to prevent another late loss to the Big Ten bottom-feeders, the Illini needed a shot.

The shot clock ticked down — 12, 11, 10 — and point guard Tracy Abrams began his move. He dribbled left off of a Kendrick Nunn screen, hesitating for a fraction of a second near the top of the key while Nunn streaked to the opposite corner. Nnanna Egwu moved in to set another screen. Abrams dribbled right and drove to the basket, drawing Frazier, Nunn’s defender, in on help-side defense. Double-teamed, Abrams kicked the ball out to a wide-open Nunn in the corner.

Nunn, having the best game of his young college career, sank the 3-pointer to put the Illini ahead by four and secure a win over Penn State.

The 3-pointer gave the freshman a career-high 19 points in his first career start.

Freshman Malcolm Hill started alongside Nunn and also scored a career-high. He scored 11, making the two freshmen the only Illini in double figures Sunday — a far cry from the veteran-dominated team that began the season, showing both the strides made by the freshmen and the struggles of Illinois’ veterans in conference play.

“I really felt like Nunn and Hill really earned that opportunity with the way they learned our defense,” Groce said. “It was time to give them a shot in the arm that would give us a shot in the arm and blend our team.”

“I was also really impressed with the maturity level of our veterans,” Groce said. He said he thought it would be nice to have some experience on the bench, which has comprised entirely freshmen thus far.

While Groce thought the veterans handled the situation well, they were clearly outplayed by their younger counterparts.

In the previous game against Penn State this season, the veterans had their best collective game of the year. Four of the five starters scored in double figures, and the only one who didn’t, Nnanna Egwu, had seven points, eight rebounds, three blocks and two steals.

Instead, on Sunday, none of the upperclassmen scored in double figures.

Illinois’ top scorer on the season, Rice, and Ekey led the veterans with nine points apiece, but Egwu and Abrams each had two, while Bertrand was held scoreless, for a total of 22 points.

“Colbert and Morgan earned their minutes tonight by how they played when they got in,” Groce said. “They took advantage of the opportunity. Hopefully that gives them a little more confidence and an understanding of how we need them to play all the time.”

Although this was the first game where Nunn and Hill started, the offensive emergence of the freshmen isn’t a new trend — the freshmen are the only Illini to have improved their scoring averages in conference play.

After accounting for just 17.0 percent of the scoring in nonconference play, the freshmen have stepped up to score 24.1 percent of Illinois’ points in Big Ten play.

They are also scoring at a more efficient rate than the veterans, making 39.3 percent of their shots in Big Ten play, compared to a 37.1 percent clip shot by the veterans.

When Groce was asked, following the game, if fans could expect to continue to see Hill and Nunn in the starting lineup, he said “potentially”.

Although the freshmen didn’t win the game by themselves — the defensive contribution by Egwu and the other veterans cannot be ignored — the Illini wouldn’t have won without them.

“The maturity level of our veterans, the playmaking ability at the end of the day, and contributions from all 10 guys — we needed all of it to dig out a very hard-fought road win,” Groce said.