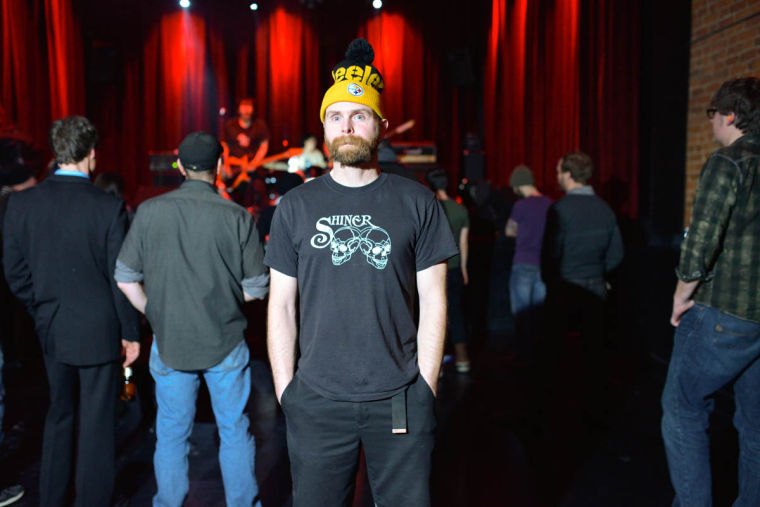 Ward Gollings, who now books bands to play at venues such as The Highdive and Cowboy Monkey, has been involved in the music scene in Champaign-Urbana since his college years at the University in the late ‘80s. It was here that his best friend and roommate at the time, Chris Corpora, introduced him to the business of booking shows.

Corpora had started booking bands for Trito’s Uptown, which was located on Sixth and Green streets where Hometown Pantry is now. He brought in many bands, including The Smashing Pumpkins, The Afghan Whigs and The Flaming Lips.

“I was best friends with him, so I helped him by doing flyers, tickets and running around town promoting the shows,” Gollings said. “I even sometimes helped with sound, the money or just everything that goes along with putting on a show.”

After Corpora graduated in 1989, a new venue opened called The Blind Pig Co. At the time, Gollings was working at a campus record store whose owner became the co-owner of the new venue.

When Gollings asked the owner if he could book one or two shows for The Blind Pig Co., the co-owner responded that he could book the entire calendar if he wanted to.

“Booking bands just kind of fell into my lap when I was about 21 or 22, and I’ve been lucky enough to make a career out of it,” Gollings said.

He booked The Blind Pig Co. for eight years, and eventually started booking for The Highdive, which he has been doing for about 15 years.

Carlos Nieto, one of the owners of The Highdive, said Gollings is the sole reason their venue has had success in the live music business.

“He just seems to have a knack for bringing in unique talent and is a fantastic communicator between talent and ownership,” Nieto said.

Ten years ago, when the owners of The Highdive opened up Cowboy Monkey, Gollings also started booking for them and has been ever since.

In addition to booking shows for these two venues, Gollings also books shows independently and has been involved with Pygmalion Music Festival, an event started by his good friend, Seth Fein. Fein said Gollings taught him everything he knows about booking and producing shows.

“He taught me that no matter what, you should always thank everyone who worked a show at the end of the night, from the security guards to the sound man to the bartenders — across the board,” Fein said. “It’s something I do and always have. Big deal, really, it is.”

One of the perks of his job, Gollings said, has been having the opportunity to meet incredible artists. He once drove Will.i.am. of The Black Eyed Peas to FedEx and back because the singer had to mail a package, he said. It was July 2000, before Fergie had joined the group, and they were set to perform at The Highdive.

“Whenever I see Will.i.am. on the Grammys or the Super Bowl or something, I think, ‘Man, I drove that guy to FedEx,’” Gollings said with a laugh. “Sometimes you’ll meet rock stars, and they’ll be so down-to-earth and genuinely nice that you can see how they got places.”

Gollings said he has also met Wayne Coyne from The Flaming Lips and Josh Homme from Queens of the Stone Age.

“At the end of each year when you look back, there’s always a dozen mega highlights of awesome shows that you not only got to see but also be a part of orchestrating,” Gollings said.

He said his music taste is pretty all-encompassing, and when he books shows, he looks for all genres — as long as the music is engaging and exciting.

“It’s great to encompass as many genres as you can, because that’s just what widens your fan base or your potential customer base. You’re not trying to draw from the exact same group of customers every time,” Gollings said.

When he was at school in the late ‘80s, Gollings said the music scene was much like it is today: “Solid, with a great smattering of local bands that make great music.”

However, he said the music scene back in that era was a little different because people had to go to live shows to hear music or buy a cassette.

“Nowadays, you don’t even have to leave your desk or your living room — twenty-some years ago, before the Internet, you actually had to go seek it out. Going to a show was more of an experience,” he said.

Gollings said he used to go see shows at Mabel’s, now home to Brother’s Bar and Grill; House of Chin, now replaced by The Clybourne; and Trito’s Uptown.

One of Gollings’ favorite shows in college was seeing Jane’s Addiction at Mabel’s for only $6 before the band got famous.

“It was right before ‘Nothing’s Shocking’ came out,” he said. “After that, they went from playing at small clubs to playing in big halls.”