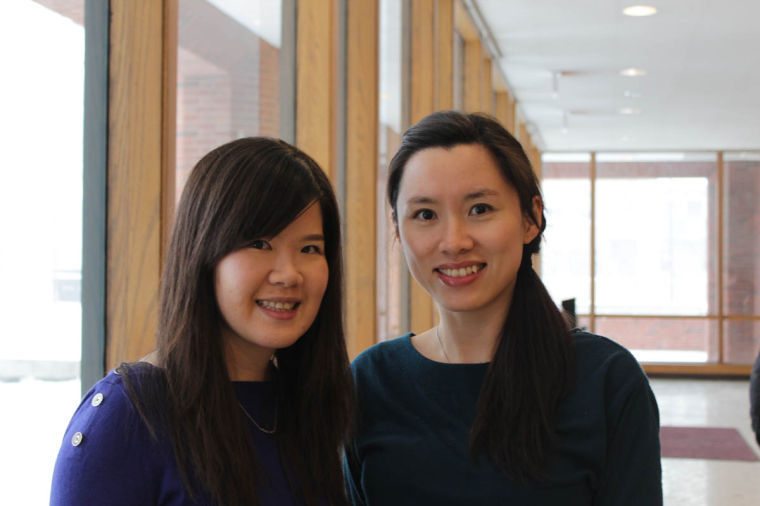 Each year, several pianist-composer teams from the School of Music create original compositions and compete to win the 21st Century Piano Commission Award. The winners are awarded $2,000, but arguably the most valuable aspect of the award is the opportunity to showcase one’s own piece to an audience in the Krannert Center for the Performing Arts’s Foellinger Great Hall.

This year’s winners of the prestigious award are pianist Ya-Wen Wang and composer Ashley Fu-Tsun Wang, who are fourth- and fifth-year graduate students in the School of Music. On Wednesday night, they will be performing their piece “From Afar,” which was composed for piano and percussion and has a contemporary twist. They will also perform several other pieces, including works by composers Claude Debussy and Sergei Prokofiev.

Both women said the concert is a great opportunity for composers and pianists alike.

Ashley said the pair is happy to showcase classical music as a more contemporary genre, different from the Beethoven or Mozart that comes to mind when the word “classical” is generally used. Ashley added that it was exciting to create a piece for a specific pianist in mind, and that it will be showcased at Krannert.

Ashley said she approached Ya-Wen late in the applicant period, which ended April 19, to collaborate with her. The materials they submitted included numerous compositions and recorded performances as well as their original piece “From Afar.” The applicants also submitted a commissioned piece proposal and a tentative program to be handed out to audience members at the concert.

Ashley and Ya-Wen found out they won the competition, in which around 10 other graduate teams were competing, during early May 2013.

Faculty judges chose the winning team based on the quality of the composer’s compositions and the pianist’s performances, as well as the team’s overall musical excellence, according to Erik Lund, the competition’s faculty overseer and a School of Music professor.

Lund said the annual Piano Commission Award concert is always a very strong event, and he said he is expecting an outstanding display of Ashley’s composition and Ya-Wen’s piano skills.

Ashley said on top of the “normal” contemporary pieces that will be performed, the audience will also listen to the sounds of a “prepared piano,” which is made by putting different objects inside a piano to produce unique sounds that pianos do not traditionally make. According to Ashley, this year the piano is prepared with bolts, plastic and rubber, among other items. The result is a piano that makes very percussive sounds rather than melodic. The audience will be treated to “a very non-traditional program, with elements that show possible connection between historic and modern music.” The structure of music to be played is slightly different as well, including some jazzier sounds and different usage of percussion.

As audience members listen to her performance Wednesday, Ya-Wen says she “never wants to set a specific atmosphere” and she hopes the “music will speak for itself.”

After the concert, Ashley says they both hope to continue to collaborate with each other. She says she hopes “other opportunities to work with other musicians will come” as well.

“(I am) hoping (Ya-Wen will) showcase a range of things that I do, and hopefully some more collaboration will spring from that,” she said.

Lund said 21st Century Piano Commission “is not the only commissioning program for our Music School,” but is the only one with a cash prize. He said the award is “one of our most prestigious in-house prizes.”

“It’s the nicest one from the standpoint of guaranteeing a performance and cash prize,” he said.

Ashley said she will be spending her winnings on transportation for a few of the musicians who will also be playing in Wednesday’s concert. Ya-Wen said she is planning a trip to New York, and her cash prize will go toward that stay.

Other commissions the School of Music holds include the University of Illinois Symphony Orchestra Composition Commission Award and the Illinois modern ensemble commission, Lund said.