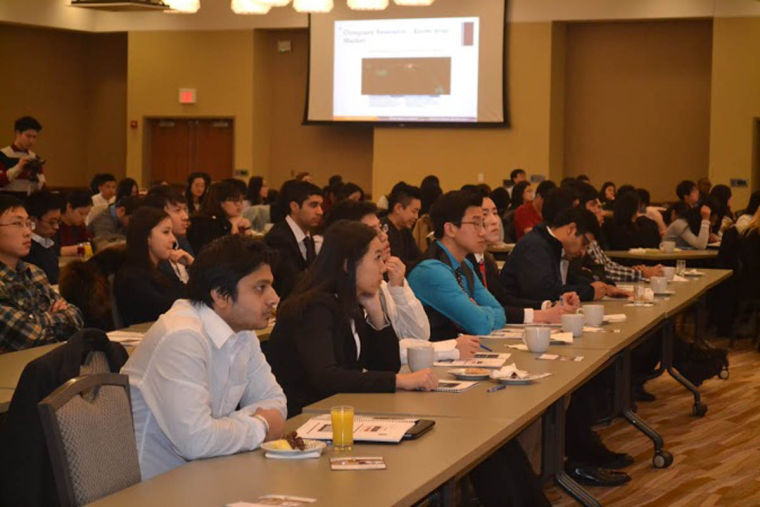 Students listen to a panel discussion on nuances of conducting business in the U.S. at the I Hotel and Conference Center in Champaign on Saturday. The panel discussion was a part of the “Solving the American Employment Puzzle” workshop, hosted by the Engineering Career Services.

Salt and pepper shakers should always be together when passing them across a table.

Name tags should always be worn on the right side of the body.

And, American football can be a great conversation starter with a potential employer.

These were just a few of the tips that Dr. Courtney Price, co-founder of “Solving the American Employment Puzzle” program, spoke about during Saturday’s seminar at the I Hotel and Conference Center in Champaign.

About 150 international students gathered early Saturday morning with their heads cocked and pens poised — listening attentively to both Price and her partner Jill Hansen, as they spoke on a variety of topics surrounding American business etiquette and culture.

The seminar, brought to the University by both Price and Hansen, was hosted by Engineering Career Services, the college with the highest number of international students at the University.

Price and Hansen were prompted to start the workshop about five years ago in Denver. Clients of their management consulting company “VentureQuest” expressed their desire to hire international students for the unique global perspective they could bring to companies, but were also saying that these students were falling short in some areas of business etiquette.

Thus, Price and Hansen developed “Solving the American Employment Puzzle,” with a main focus of helping international students prepare to find employment in the United States after graduation.

According to the seminar’s informational website,  only 11 percent of international students studying in the United States will actually obtain employment in the country after graduation.

Jerome Ng, assistant director of Engineering Career Services, said he and his colleagues at the University saw the need to bring a workshop geared specifically toward international students. He said that while domestic students are largely accustomed to self-promotion and the idea of networking, for some international students this concept differs from their culture back home.

Sophie Li, international student from China and sophomore in Business, said she finds it hard to step forward and promote herself, simply because she is not used to it. She said she thought the seminar was most helpful in learning the importance of being confident around potential employers.

Ng, a native of Singapore, said this lack of emphasis on networking and self-promotion in certain cultures like East Asia is the result of a greater emphasis on grades. If you get good grades and get into the top-tiered schools, you are more or less guaranteed the job and there isn’t a need to “actually promote yourself.”

For international students coming to the United States, this can take some getting used to.

“Here you can be at a lower-ranked University and still have an opportunity. It’s not as much about your status, but about what you bring to the table,” Ng said.

During the seven-hour seminar, various business professionals gave tips to international students about how they can convey their skills to prospective employers. Afterward, attendees were given the opportunity to network with speakers and various professionals who attended the event.

At one point in the seminar, Price and Hansen conducted a mock networking conversation, playing the roles of “prospect” and “employer.” Many international students in the audience learned that networking is not as ingenuine as they had previously thought.

“In the past, I had always thought of networking as insincere, and I didn’t really want to build that kind of relationship with people,” said graduate student Miao Zhang. “But after Dr. Price taught us that with networking you can help others as well as get help from others, I now think it is a double-benefit.”

Panelists at the workshop Saturday included professionals who had previously been international students themselves. Li said she found this helpful because she could learn from their experiences and it was comforting to see them have success.

Alex Shin, junior in Engineering, said there is more pressure to stand out as an international student, because in order to stay in the United States and work here, you need a sponsorship offered by a company, which can be costly to them.

“You have to make them love you,” he said.

For Shin, language is the biggest barrier.

“If the conversation goes deeper, into more professional detail levels, it’s definitely harder for me to convey my ideas clearly than for other ordinary Americans,” he said.

According to Shin, the most beneficial part of the seminar was learning specific etiquette for interviews and career fairs.