Glowin’ and Flowin’ at The Canopy Club 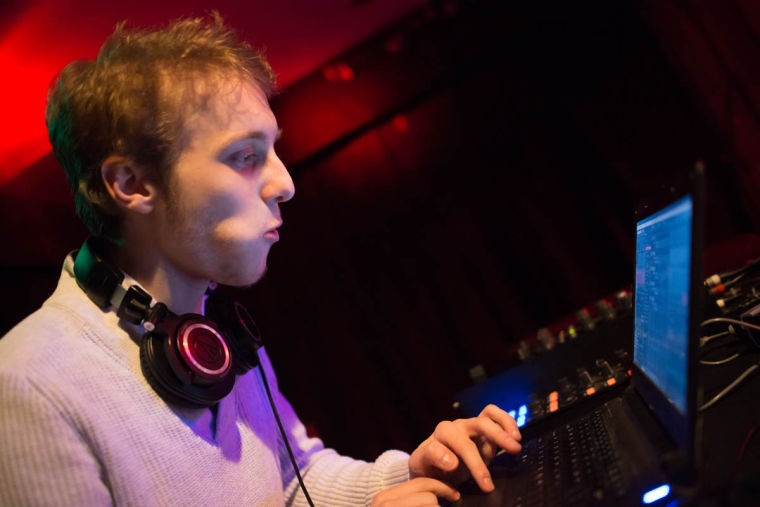 Derrick Miller, sophomore in Engineering, DJ’s under his stage name “drox” at the Canopy Club’s “Glow and Flow” event on Wednesday, Feb. 12.

Glow sticks and glowing cups wave in the air, and white shirts and students’ teeth are illuminated by black lights. The bass pulsates throughout the venue, and concertgoers pump their fists to the beat of the electric dance music, or EDM.

As attendees dance under the neon lights, the DJ stands on the stage behind his booth, spinning fresh tracks with an electronic twist. It’s 9 p.m., and the party has just begun at The Canopy Club.

Hosted by a rotation of DJs, including DJ Synthetyk, DJ Revo and 3XCEED (also known as Mike Pierga, Kyle Murphy and Julian Semer), Glow and Flow Wednesdays is a new EDM event that takes place at The Canopy Club every Wednesday night. The event showcases local DJ talent and provides an outlet for students and community members interested in electronic music culture, said Ryan Grady, bar manager at The Canopy Club. The event has no cover charge and features $2 wells in glowing cups.

On Wednesday, Feb. 19, the host will be 3XCEED and the special guest will be Critical Condition, also known as Pradeep Chawla. The DJ 3XCEED has spun music in several bars on campus, including The Red Lion, Clybourne’s and KAM’S.

The idea for the weekly event came from Jamie Wellman, the assistant to the coordinator of The Canopy Club. The free event kicked off during the second week of January, and has had a turnout of about 50 people each week, Grady said. Additionally, The Canopy Club has been advertising the event through word of mouth and by hanging posters around campus.

Victoria Ronin, a regular at The Canopy Club and a senior in Media, said that she enjoys going to Glow and Flow Wednesdays.

“I like the music, and it’s a nice break in the middle of the week,” she said. “It’s a good time to chill with your friends, and go have fun.”

Raymond can be reached at [email protected]