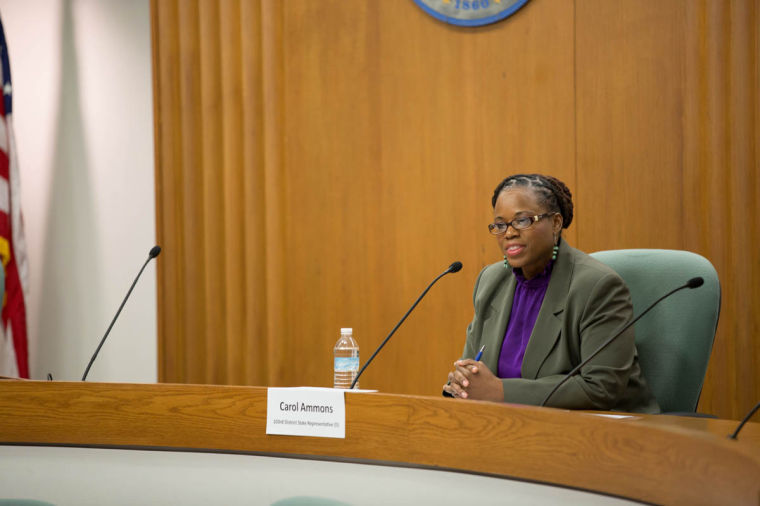 As a current member of the Urbana City Council and former member of the Champaign County Board, Carol Ammons has spent six years in elected public service to the Champaign-Urbana community. Now running for representative of the 103rd district, she is looking to widen the scope of that community.

Her career in public service has led to endorsements from local organizations and community members, including the Illinois Federation of Teachers, the Service Employees International Union, Local 73, and the Graduate Employees Organization, Local 6300. Despite these endorsements, Urbana mayor Laurel Prussing, who serves with Ammons on the city council, endorsed her opponent, Sam Rosenberg.

“We very rarely endorse as an organization, but the GEO decided to endorse Carol Ammons,” said Stephanie Seawell, GEO spokeswoman. “She has experience both in community causes that are very important to our members, but also as an elected official.

“Whenever we need people from the community to support us as a union, one of the very first people we turn to is Carol Ammons.”

As representative, Ammons said she would focus on a bipartisan effort to pass the graduated income tax, environmental regulations, specifically regarding fracking, and drilling and drug policy reform.

To achieve these goals, Ammons said education needs to be done across the state to explain to communities why a graduated income tax would be beneficial. She would also continue to look into and work on current environmental regulations — which she said are not strong enough in air and water quality protection — and the research and legislation currently being done on drug policy and sentencing reform, which she said would make a difference in the state’s criminal justice system.

The Fair Tax Amendment, or a move to a progressive income tax, is especially important to Ammons, and she believes it will benefit the state by bringing in necessary revenue, but it is important that revenue is used towards education and paying off the state’s debts.

“We also need a system of taxation that has fairness at its base. Our current taxation policy does not include fairness, and it really taxes the low income families, low wage earners, at a higher rate than the graduated income tax would,” she said. “If elected in Springfield, I’ll continue to fight and carry the banner that was started by our current state representative, Rep. Naomi Jakobsson, and I’ll continue to move that proposal forward.”

She also addressed her opposition to Illinois’ recent pension reform legislation, which she said was unconstitutional because it diminishes the benefits of retirees.

“It is responsible for us, however, to provide the safety nets in our states. We cannot cut spending for senior programs (or) housing programs in our community,” she said. “Right now, they are living on 25 percent less monthly than what they were earning before.”

Evan Keller, a freshman in LAS, is the director of Illini for Carol Ammons, a group on campus dedicated to advocating Ammons’ campaign. He cited her experiences in city and county government, as well as non-profit organizations, as reasons for his group’s support.

“Carol Ammons has talked about the importance of (the University) and she realizes that it’s a reason for the importance of the district,” he said. “She talks about issues that matter to students, whether that’s gay rights, or the decriminalization of marijuana or income inequality.”

Right now, he said the group’s focus is helping Ammons win the March 18 democratic primary rather than the general election later this year.

Like her endorsers, Ammons sees her experience of public service in the community as a strong component of her campaign.

“Our’s is a peoples campaign, that’s what I’ve been doing. I have been an ambassador for the causes in this community that are important to the people of the 103rd district,” she said. “My experience in government, my roots in this community and my passion and concern about education, jobs, access to health care and social justice is what motivates me to serve.”

Eleanor can be reached at [email protected] and @eleanor__black.